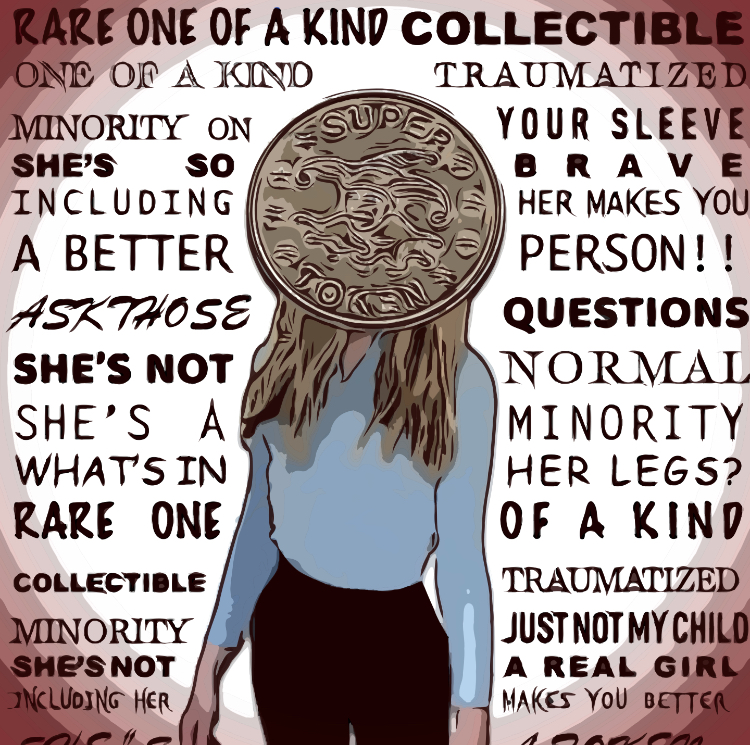 Tackling tokenism: minorities should never be reduced to our trauma

I just turned 18, it’s my senior year, and the end of November is right around the corner.

Yes that’s right, if we do the math it’s none other than the season of giv-

But I’m not worried, I have a secret weapon.

I’m one of the first out and proud transgender students in a small midwestern town.

Yes, I’m a minority. That’s right, I said the word.

From what I understand it’s a scary word for some. It’s one of the words I feel I’m never supposed to say.

After all, you don’t want to make the privileged majority uncomfortable.

They know you exist, are proud to say they know one of you, but never want to talk about your minority existence unless it is convenient for them.

They’ll ask invasive questions, attempt compliments, and use stereotypical lingo, doing whatever they can to grasp my different experience like its charity work.

“HAVE YOU HAD THE SURGERY?”

“I JUST LIKED YOU BETTER AS A BOY.”

“I WOULD HAVE NEVER GUESSED YOU WERE A BOY, CAN YOU BELIEVE THEY WERE A BOY?”

“I SUPPORT YOU NO QUESTION, BUT HE’S JUST IN A PHASE. IT’S DIFFERENT.”

They’re uneducated, and I can’t always blame them for that. Still, I  shouldn’t have to educate them on my community, and I shouldn’t allow myself to be objectified for my experiences.

I’m not an oddity or a curiosity or the newest exhibit at a gallery of novel and interesting things. Yes, I am a minority when it comes to my experience, but not visually, so what really makes a minority?

I transitioned young and am lucky to be exempt from male features, so I can effectively “blend in” to majority cisgender society. Am I still a minority? Yes, because my experience is always in question, by the government, “loved” ones, and strangers.

I often find myself discounting my own experience because I’m both supported and privileged. I am still a white female, transition or not. I’m what you call “unclockable”: I essentially benefit from collective society by blending in. I “pass” easily as a woman.  If I don’t look transgender, they can forget that I am. They don’t have to reckon with anything that doesn’t appear normal to them. While some biracial individuals can gain privilege from being “white passing,” many people of color cannot escape or hide their minority existence. Even in my difference, I am privileged in ways they are not.

The minority experience is an abstract and uncertain measure of a variety of factors, an important one being location. In my community, especially within my school community, there is a relatively small number number of openly LGBTQ+ and transgender individuals, of which I am one of the most well-known, largely due to the combination of my school leadership roles and my openness and willingness to talk about “uncomfortable” issues. There is responsibility in this. There is occasionally frustration in this. There is loneliness in this.

What if I weren’t the token minority? What if I lived in a time or place where so many people were in the same position as me, my tokenism and isolated experience would perish? This begs the question, are some minorities more oppressed than others? Despite the statistics, can minority experience be measured?

Comedian, author, and 2 Dope Queens co-podcaster Phoebe Robinson is a champion for black women and has lived the collective experience of being suppressed as a minority and woman of color. Robinson elaborates on her experience in a 2016 Elle interview, where she states: “Black women are aware of how they’re viewed and how they’re treated, especially now that certain schools are banning black students from wearing braids and dreadlocks or afros. Black women are constantly being told that what they’re doing is not okay, that how they look naturally is not okay.”

Minorities shouldn’t have to escape and hide their minority status in order to fit in, but we’re often given no choice but to blend in.

I want to stand up for myself. I know that I don’t owe anyone anything, and that I have the ability to refuse uneducated comments…but I don’t. I wonder, what if nobody else will answer their questions? What if they never ask anyone else? There is a weight of great responsibility that comes with representation: I feel like I’m required to respond.

And so I answer their condescending questions, one after another, holding tight to the hope that maybe, just maybe, this act of service will change the way they see through the lens of their ignorance.

I will always be proud to be fully honest about my experience transitioning, but the reason I’m completely honest isn’t just for me: I’ve made that decision for my safety. I wouldn’t feel safe keeping such a big secret out of fear of the backlash that it could cause, but it shouldn’t be that way. As complicated as it may be for others, it’s really quite simple: I was born with the wrong gender assignment, so I embarked on a long and difficult journey to arrive at my correct gender expression. This shouldn’t be a deal breaker.

We should never feel required to broadcast our journey and experience as minorities in exchange for safety and security in the majority’s world.

The cisgender and white majority population have their own personal struggles, but they aren’t belittled, discounted, assaulted, and killed for them. Though I’ve been incredibly fortunate, I still live in fear.

According to Forbes, the abuse and killing of transgender people isn’t an insignificant reality, but an increasing one. Diversity and Inclusion LGBTQ+ reporter Jamie Wareham writes for Forbes, “350 transgender people were killed this year (2020), in a figure that has risen since last year’s total of 331.”

They applaud us when we’ve succeeded in a world apparently not made for us. They’re happy to shed a tear at our feel-good stories about how we’ve overcome adversity, but never want to talk about the weight of our accomplishments. It’s clear that our existence only benefits them when we succeed, when we are undeniably exceptional, and when we are, we do them another favor: overshadow the violence, abuse, and negative statistics that plague our communities.

When you’re a minority, particularly in the token role, you give part of yourself to them. For what we’ve faced we could defy the world and build a new one, but we are given the meager opportunity to survive, not thrive. Under the societal expectations created by the majority, we’re forced to lock our trauma and experiences deep inside, only reaching for the key when it’s convenient, when we have permission, when we’re asked to speak. We’re allowed to share the easier facets of our story: what your new closet looks like, how much you love skirts, how thankful you are for your newfound existence.

The rest stays under lock and key. I’ve kept the most personal parts of my story to myself, only sharing with trusted supporters, therapists, and most importantly, my four legged friends.

Only now, in the pivotal season of college applications, will my vault finally be unlocked.

After years of self-reflecting, feeling alone, and having constant interactions with people who were ignorant at best and transphobic at worst, I can finally flex my minority status in one thing and one thing only: the personal essay. The place where society collectively exposes their deepest and darkest of traumas. Naturally, the most deep and touching wins the gold.

I may be particularly jaded by 2020, but throughout the college application process, I started feeling more and more that this wasn’t post-secondary education’s way of honoring students with diverse backgrounds, but rather an attempt to force students to leverage their worst and most painful experiences, only to be seen and validated by a stranger. Some of us might not even be ready to deal with the pain of these experiences, but we’ve been conditioned to believe that writing it all out in 650 words or less is necessary to stand out in the highly-competitive crowd of college applicants.

When it came down to my essay, I didn’t encompass all of my pain. Instead, I decided to celebrate the day I finally knew my truth.

It wasn’t easy, and it certainly wasn’t all rainbows and sunshine, but I’m incredibly proud of the story I shared.

I could have flexed my minority muscles and shared my worst most traumatizing experience, but I didn’t want to. There have certainly been painful moments and setbacks, but those traumatic and sad moments dictated by other people do not define my story.

We need to tell our stories on our own merit and decision, not to fit a mold or brag sheet for some large collegiate institution. Minorities are so much more than the sum of the obstacles that we’ve had to overcome by no fault of our own. Our existence does not exist to entertain the majority.

We don’t wake up everyday facing our struggles to satisfy the curiosity of tourists on the other side of the glass.

We are not zoo animals.

We don’t do tricks to validate our presence.

We aren’t yours to dissect.

We are human beings, trying to live and coexist in a world not made for us.