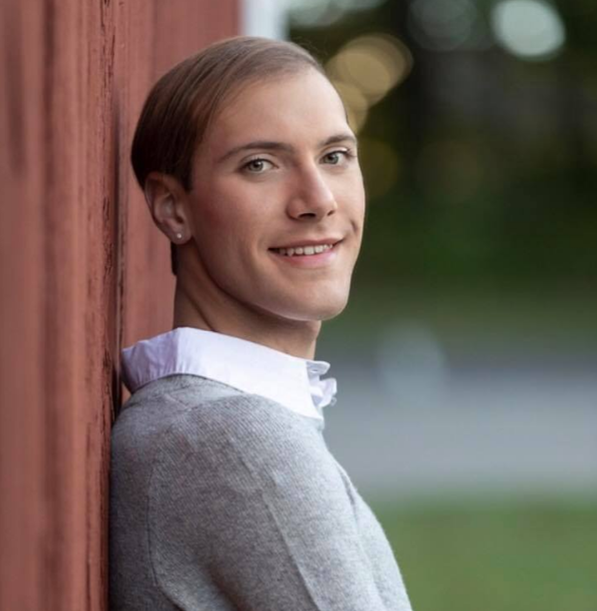 With a name and gender identity that truly represent who she is, Azalea is living her best, truest life during her senior year.

As a teenager, you’re navigating the world around you, growing into responsibilities, and discovering who you are. Senior Azalea Gerhard, an autistic transgender student, didn’t know the full extent of her personal discovery. “At first, I didn’t think that would be me,” she says. “I thought what everybody else thought, I was influenced by what other people thought about transgender people around me,” she says.

Gerhard is a member of the forensics team, attends ethics club, plays tennis, watches videos online, and is ready to graduate. Only in order to reach this last milestone, she’s had obstacles that are vastly different than those of her peers. “I remember this video kept popping up in my recommended videos of this transgender girl named Corey Maison and I clicked on it, and the things she said resonated with me,” she says. “After I watched that video, I started doing some research about the word transgender, then I learned about gender dysphoria and then I realized that was something I had. I knew when I read all that, I looked at my height, my shoulders, my hips being narrow, my face has boys facial hair, and just body hair especially, all those things made me dysphoric. The way my body looked, when I looked at myself and didn’t like what I saw,” she says.

Gender dysphoria is the phenomenon encountered by many struggling with their gender identity, where they feel that their physical features and assigned gender at birth do not match their gender identity. According to Psychology Today, it is estimated that about 0.005% to 0.014% of people assigned male at birth and 0.002% to 0.003% of people assigned female at birth are diagnosed with gender dysphoria.

Though she didn’t have a name for them yet, Gerhard first started experiencing these feelings in late elementary school. Throughout high school, she sought out assistance, including female hormones and emotional therapy to realign herself physically with her gender identity. “I’m a girl, and all that’s missing is transitioning,” she says.

Transitioning is the terminology utilized by the transgender community when physically transitioning into another gender. Throughout this process, Gerhard has been confronted with many obstacles while seeking her own happiness. “Not knowing who to go to for the hormones and how to get them, not knowing what type of doctor to see, there is just a lot of things a high schooler seeking to transition wouldn’t know, but since I’m 18 I’m expected to already know all of this,” she explains.

Her journey has not been without sacrifice. “I temporarily lost the connection with my family. But to be honest I don’t think I lost much, if anything I gained more,” she said. Some parts of her life, however, she was happy to give up, including her old name. It wasn’t an easy process finding and choosing a new name that truly fit and defined this new happiness and stage of her life, but the end result was worth it. “It’s nice finding a name that really fits you, I personally don’t like names that are close to my dead name,” she says. “I went through a few different names. Because my birthname was Nick, I thought Nicki would be easier for others, but I just didn’t like it. Then I tried Hannah for awhile, but it just didn’t work for me, then I tried a few others, like Vanessa, but those didn’t work for me, either.”

One of the challenges was that Gerhard wasn’t just finding a first name, she was also searching for a middle name. “I always hated my middle name, I remember that being a first sign of dysphoria for me. My middle name was Robert, and I just hated it.”

Finally, she settled on a name that felt right. “When I played video games at about 10 years old, there was a place in a Pokemon game called Azalea town, and I thought that was really pretty flower name. I always thought it would be a nice name to name a daughter someday,” she says. While searching for the perfect name, Gerhard remembered that moment and had an epiphany, trying the name out for herself. “It fit,” she remembers with a smile.

One of the darkest parts of Gerhard’s journey came during her sophomore year, when she was struggling with knowing who she was at the deepest level. “I didn’t know what the word transgender was until I was 15, I didn’t think it would apply to me. Only until when I was 16 I figured it out, and I went for a whole year in denial,” she recalls. When finding her true identity, Gerhard had some plaguing difficulties. “Later thinking I was gay, and I was stuck between gender identities, non binary, genderqueer, demigirl. I felt like I wasn’t girl enough to be a girl. I was bit confused honestly, I was trying to find my identity who I was,” she says.

An additional layer of turmoil with transitioning and interacting socially came from the fact that Gerhard is also on the Autism spectrum. “I think it can be a bit more difficult for me to explain who I am, and express that for others to understand and interpret that. It can be difficult I don’t always know what to say, it can make it hard for me to socialize,” she explains. “It makes me feel very isolated, and alienated, left out in groups very often I always feel very alone. I know I shouldn’t desire about fitting in, but I just have this desire inside,” she says.

Gerhard found support in many different places. “I have met so many people, and I wouldn’t have the same experiences, my life would have been way different. I wouldn’t be the same person,” she says, fondly describing the new people that she has met along her journey, many of whom have become her closest confidants.

“Azalea will be there for you, and stick by your side. She will listen to you and lift you up. She makes my day so much better, when I’m feeling down, and will offer her opinion and advice. She is one of the most supportive people I know, and I’m thankful to have her in my life,” says sophomore Gabrielle Sorgenfrei, who is a close friend.

Sorgenfrei sees friends to play a crucial role in supporting their transgender friends. “People can help their transgender friends, by being open and listening to them. The most important part is being supportive and seeing them for the gender they really are. Take them clothes shopping, and even help them look more masculine or feminine,” she says. Gerhard is also grateful for the support of her family: “I think they’re pretty accepting of my gender identity, I’m called Azalea at home, and occasionally they slip up, but they don’t mean to,” she shares.

She has also found support in the classroom and throughout the school. Spanish Teacher Kaitie Paynich, who leads the GSA, has formed a particularly close relationship with Gerhard. “I’ve known Azalea probably about 3 years now, and she’s been coming to GSA since it was reinstated,” she says. “I think Azalea is one of the most incredible people I’ve met through GSA, because she has been through so much. Not only is she going through the gender dysphoria, she also has autism, and there’s that double layer of not understanding social cues and on top of that feeling all these different things of gender dysphoria, I can’t imagine yet she’s so positive and so sweet, just wants to be embraced by everyone she’s amazing,” she elaborates.

Despite facing many challenges along the way, Gerhard is a picture of contagious positivity, constantly demonstrating that happiness is attainable, even in the most challenging situations. “If there isn’t a reason to keep going now, there may be a reason in the future,” she says thoughtfully. “Although I do struggle with loving and accepting myself sometimes, being myself is important and the things and experiences that make me who I am are important, I’d be an entirely different person without them,” she says.