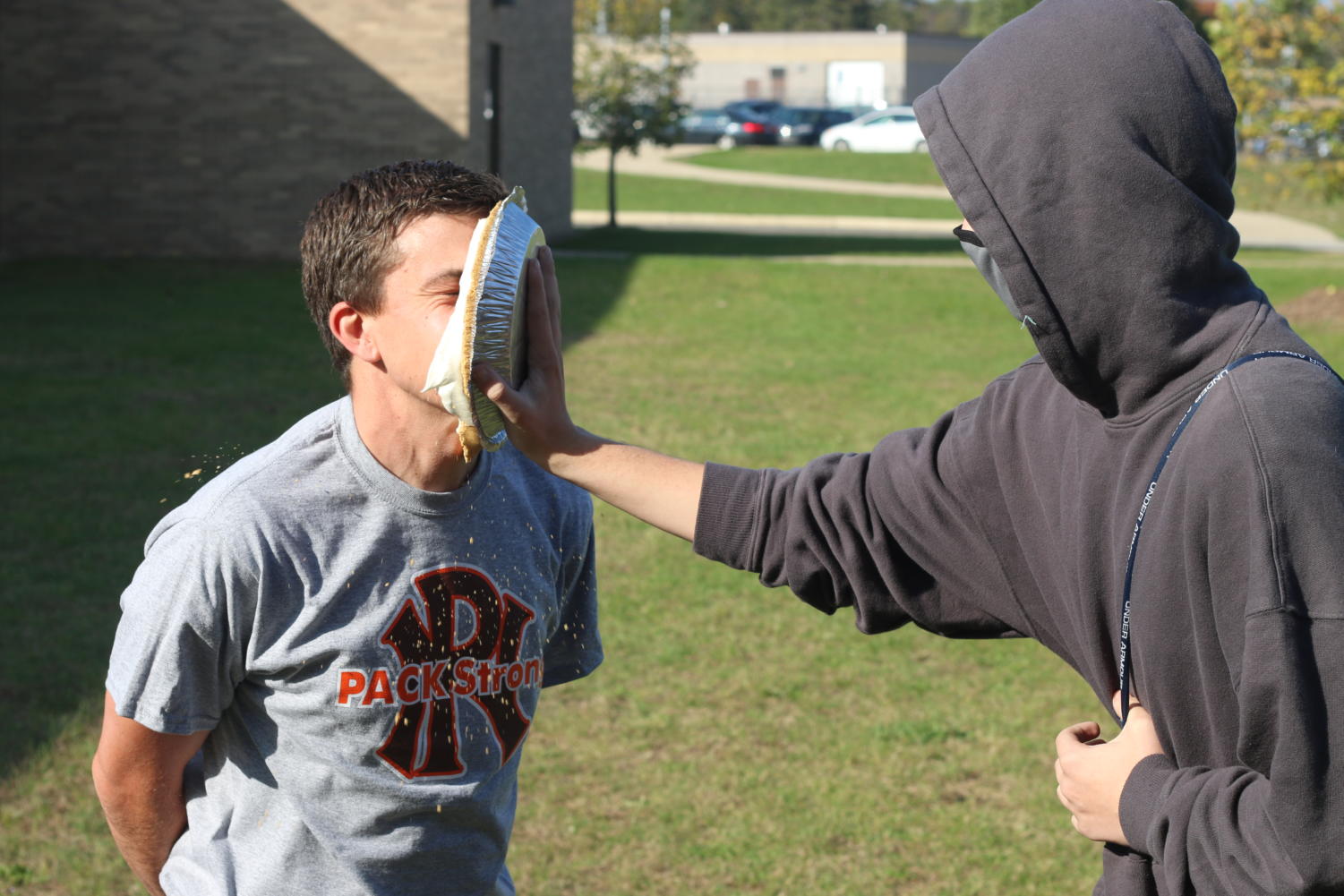 History teacher and Senate adviser Joey Wood gets pied by sophomore Kamden Morgan as a part of the Lunches for Lives fundraiser. (NL staff)

History teacher and Senate adviser Joey Wood gets pied by sophomore Kamden Morgan as a part of the Lunches for Lives fundraiser.

Lunches for Lives: a fundraiser, a rivalry, a pie in the face

On Friday, November 5, students crowded around the lower level commons doors to watch teachers Chris Prom, Joey Wood, and Justin Olsen take a pie to the face. The reasons why are both altruistically simple and hilariously complex.

Students earned the right to pie a teacher during a week-long coin wars fundraiser for Lunches for Lives (L4L). L4L  was started 10 years ago by the Be There Club, now called Interact Club. In previous years, Lunches for Lives would cook meals such as quesadillas and peanut butter and jelly sandwiches for alternative lunch meals. Students would buy these special lunches and the money would then go to families in need in Portage.

This year, it became clear that Interact needed a new, more Covid-friendly option. “[Interact] found another way during lunch to help our families in Portage,” said teacher and Interact Club adviser Greathen Derenne. Interact leaders decided to do a coin war: during lunch, students could put money donations into the jars of teachers who volunteered, and at the end of the week, the three teachers with the donations in their jar got pied in the face.

What appeared to be a straightforward fundraiser quickly escalated into a friendly competition between science teacher Chris Prom and history teacher Joey Wood, who have a long history of trying to one-up each other.

When the two first met at new teacher orientation in 2019, things got off to a rough start when Prom caught Wood licking the frosting off his Oreos before he ate them. “He came up to me all crazy-looking, spouting off about how I ate my Oreos all wrong,” Wood says.

Things continued to go downhill when Wood caught Prom eating a right Twix, then throwing the left Twix (which Wood believes is the superior Twix) away. Things got even worse when Prom discovered that Wood was a fan of the band Hanson, while he was a fan of Nickelback. “Case closed. I don’t like Mr. Wood,” Prom said, equal parts emphatic and joking.

From there, the rivalry only expanded. Prom has a photo of Wood wiffing a kick in last year’s United Club kickball game, and Wood, who advises the student senate, edited the Breadlift donor photos to feature a picture of Prom getting beaten by a defender during his days as a WMU football player. When the coin war was introduced, the two decided it was the perfect way to continue their feud while helping the families of Portage. “This was the perfect opportunity,” Wood said. “I just hope that it is an Oreo Cream pie so he will finally see how frosting first then cookies is the only way to eat an Oreo.”

When all was said and done, 23 teachers volunteered to take a pie in the face for such a great cause, but the winners were Prom, Wood, and science teacher Justin Olsen. Prom had a little bit of help getting to the top: Wood came in with a stack of $1 bills one day and gave them to students to donate to Prom’s jar.

Good fun for a good cause

The sun was shining on Friday afternoon when the teachers assembled to meet their fate. Prom was pied by junior Emily Hickman with enough force that the crowd audibly gasped. “Mr. Wood gave me money to put into Mr. Prom’s bin,” Hickman explained, “and then I got picked to pie him! I’m glad I was able to pie Mr. Prom because he’s my astronomy teacher and I think he’s pretty cool. I’m a softball player and I knew Mr. Prom could take it, so I just threw it hard.”

Prom could, in fact, take it, and in good spirits at that. “This was the perfect culminating event to a great week of competition and togetherness as a Huskie family. All the money donated is going to a great cause, and students really stepped up made it a fun event,” he said, adding: “I’m especially glad that we Mr. Wood was able to participate…also, I expect a cut of Olsen’s Tik Tok royalties.”

Prom was referring to Olsen’s TikTok live, which broadcast his pieing by senior Ashley Miral to 927 of his 82.2k followers. “I knew I had to make his pieing dramatic when he told me that he was streaming on TikTok live,” she said. “Mrs. Friedman helped me figure out my strategy, which was a running start and at an angle so the pie would get everywhere. Overall, I was just happy that I got to participate and that it was for a good cause.”

Olsen was a good sport about the up close and personal experience with dessert. “Anytime I can help encourage students to be philanthropic, I am happy to put my face on the line. It’s great that a student-led club like Interact can be a bridge to connect our school with the community that we support,” he said. “I did have a shirt made (shoutout Derenne) to highlight one of our student contributors who’s fundraising efforts are responsible for the pie in my face. It will not be forgotten.”

After ensuring that Prom got his due, Wood was pied by sophomore Kamden Morgan. Despite the fact that he was covered in whipped cream, his spirits were high:  “Emily Hickman is my hero. The power she packed into her hit on Mr. Prom was like the force of a WMU linebacker forcing a fumble against CMU in a 44-14 win in 2011,” he said. “Watching that was well worth the second mortgage I took out on my house to make sure it happened. It was great to see so much money raised for a great cause. Once again, the Interact Club put on a great fundraising event.”

All $642.70 from L4L goes to helping our families right here in Portage. “We are thankful for all the teachers who volunteered and for all the students who donated,” said teacher Kim Palmer. “We hope our efforts will make at least one family a little happier this holiday season.”

Click here to see all of the photos from the event.