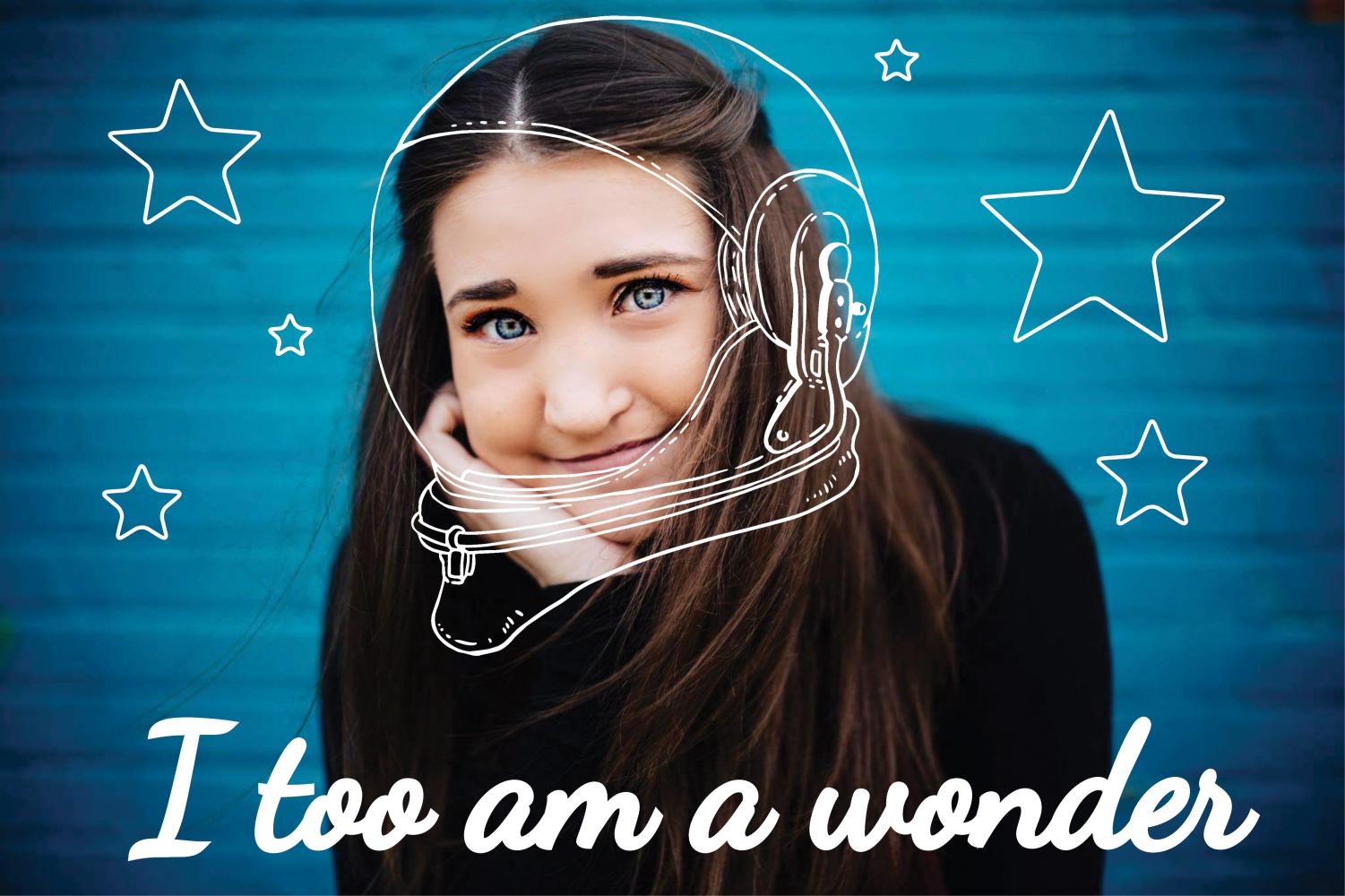 I too am a wonder: how a novel helped me accept my facial difference

Head down. Three deep breaths. One. “This is just another round,” I thought to myself. Two. “Give it all you got.” Three. This could be any ordinary performance at any ordinary forensics tournament. At the same time, though, there was nothing ordinary about it: it was, to this day, the most important performance of my life. It was the day that I would morph into the character of Auggie Pullman from R.J. Palacio’s Wonder, which was a marked moment for me because I, like Auggie, was born with a facial abnormality.

Glancing around the whitewashed room, I attempted to gather my bearings while my stomach started to twist and churn into malicious knots. I was sitting on my mother’s lap as she talked to my nurse. They didn’t notice I was awake, however, until I managed to throw up all over the nurse’s blue scrubs. This wasn’t my first surgery, but it is one of my first memories of a surgery. I was five.

I would have several more surgeries over the course of my life. Other than the inconvenience of not being able to run around and play, having surgeries when I was small was not very burdensome. The most significant of my procedures occurred before I turned a year old; thus I have no recollection of the pain. From those I can remember, I cannot recollect the severity of the pain, or any pain at all. Quite frankly, I recall liking the process: what more could a little girl ask for than presents and attention? Plus, being pushed in a wheelchair around the hospital was simply exhilarating.

It was not until I got older that the toll of being born with a cleft lip and palate started to tax me. By fifth grade, I started to become insecure about my looks. My classmates started to care about their appearances, and I just felt disappointed when I looked in the mirror: a crooked, unaligned nose, unusual teeth, and a scar that seemed to stand out above everything else.

Part of this insecurity came from realizing that I did not look like everyone else: no TV ads or highway billboards used people with even the most minor of facial deformities. More so, though, it came from nonchalant comments, questioning why my nose or lip looked different.

The worst thing anyone ever said to me about my facial difference came from an anonymous note. It read, “your face is fat and demented.” To this day, I can still see the note plainly in my head. This mean comment was left without warning, and to this day makes me question if I can ever truly be pretty. I came of age with my biggest insecurity displayed plainly across my face. I hated it.

My sixth grade teacher was one of my favorites throughout all of my schooling. He encouraged my passion for writing, often talked to my class about real world issues and told me I was capable of success as a student. Out of all the thought-provoking talks he gave us, I remember this one the most: when God finished creating us, he pressed his thumb to create the philtrum, or small divot in the center of the upper lip, to give us life. I still can feel the hot tears I tried desperately to blink away that day. I remember thinking to myself that I was not complete and unlovable. I was not even sure if I believed in a greater power, but I questioned myself nonetheless: “Why did God mess me up?”

By the time I reached high school, my insecurity was at a breaking point. I tried to hide my scar with makeup, but no beauty product could fully cover the mark on my face. I did, however, decide to join clubs and make new friends. Freshman year, I managed to stumble upon two fairly different things that would ultimately change my life: RJ Palacio’s novel Wonder and Forensics. One gave me the courage to speak my truth, while the other gave me a platform.

When the forensics season started, I was told by my coach to find a book and cut it down to an eight minute performance. At that point I figured I could just pick something off of my bookshelf, so I pulled out a bright blue novel that was gifted to me a couple of months prior, titled Wonder.

As I read through RJ Palacio’s book about a boy with Treacher-Collins Syndrome, I felt a part of myself in every page. While Auggie’s craniofacial difference was more severe than mine, I could relate to all his feelings: being insecure, getting teased and questioning whether or not my facial difference would always matter to myself and others. At the end of the book, when Auggie receives a standing ovation for bringing kindness to his school, my tears soaked the pages. I was so proud that he had people cheering for him, just for being who he was. In Wonder, I had found representation of the struggles I had gone through for the first time in my life. I knew this was the prose piece I would have to perform, and I had the smallest inkling of hope that this was going to be a turning point for me; that giving a voice to Auggie’s story, and also to my own, would finally give me the confidence to know that what I said mattered. That I mattered.

For weeks on end I practiced everyday after school, working with coaches and older students. They told me that they were impressed at my skill level, but I still felt like I was not good enough to break into the semifinal round. While the praise made me feel appreciated, I still struggled with recognizing my own capabilities.

At the first tournament, wearing a blue jacket that matched the cover of the book, I gave my performances everything I had. I was so nervous, but knew that to break to semifinals I would have to set my fear aside. After lunch, when the semi-final postings were hung in the cafeteria, I saw my name written in big block letters. Later that day, when I saw that I broke to the final round, I cried tears of joy. I realized that I could tell a story dear to my heart in a way which I did not think I was capable of before. That day, I brought home a fifth place trophy.

To my surprise, I found success at the next two tournaments as well. I won fifth place at each. More surprising, though, was how much praise I was getting from my other competitors. People who I did not know would come up to me and compliment me, saying that my performance moved them. It was strangely cool to become so popular within this community, a group of competitive speech kids that shared my passion.

Before I knew it, I was on the bus to the last tournament in Holland. Everything flew by so quickly, that before I knew it I was getting ready to perform in the final round. Standing in front of the packed classroom, I held my head down and took a deep breath. I kept thinking to myself how this could be the very last time I ever performed this piece. I put every emotion I had been harboring for the last 10 years into that performance.

At the awards ceremony, I was nervous. My goal was to get fourth place, to break my fifth place streak. When prose was called, I walked up to the stage with the other five finalists. Putting my head down, I heard the names getting called. Sixth. Fifth. Fourth. I was pleasantly surprised I made it to the top three. Third. Now I was simply a jumble of nervousness and excitement. Second. I heard people gasp. “And in first place, from Portage Northern High School, Lily Antor!”

I shook the man’s hand as he handed me the tallest trophy of the bunch. Before I even looked up at the audience, I could hear cheering. When I raised my head, I saw everyone standing and applauding with pride. Just like Auggie, I got my standing ovation.

Everyday I struggle with my cleft palate. I’ve had eight majors surgeries, dozens of procedures and nine years of braces to quantify the medical impact thus far. At times, the emotional toll has caused just as much pain as the surgeries. As I write this, my jaw is currently wired shut from what I hope will be my last major surgery, and the feeling of my fingers on the keys reminds me even more so than the pain in my jaw that I am not finished yet. I still have to get my braces off and have a couple more procedures before I am done, I haven’t quite been able to neglect my insecurities, but I’m getting there. I am smart, capable and worthy. I too am a wonder.

9 Responses to “I too am a wonder: how a novel helped me accept my facial difference”