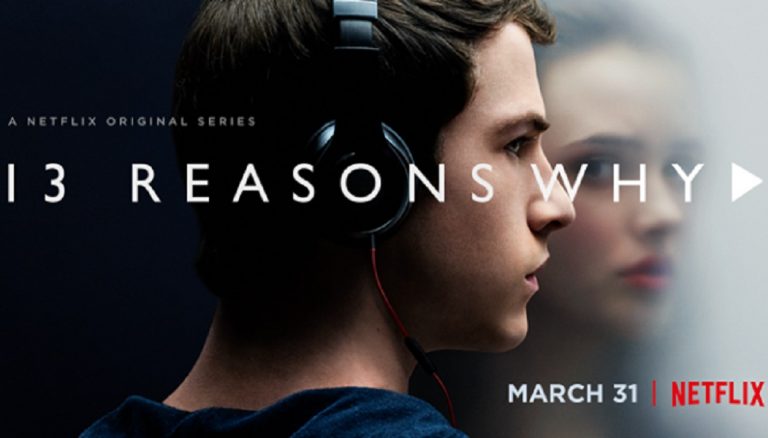 Jay Asher’s Thirteen Reasons Why has made its way onto screens after seven years of being a popular novel amongst young people. If anyone has jumped on the bandwagon, they know that Thirteen Reasons Why entails the unfortunate events that lead up to Hannah Baker’s suicide. There has been controversy across social media following the release of the Netflix original, and some debate whether or not the show is appropriate. Towards the end of the season, scenes become more and more explicit to the point where it is almost hard to watch due to the graphic nature of some of the content. Despite the shock factor of a few scenes, Thirteen Reasons Why is full of valuable lessons that its audience can learn from. Those who believe the show may be too graphic have most likely not read the original novel, as the novel represents exactly what the show is trying to achieve. “I think the tv show allows you to see into the minds of all of the other characters and what they’re going through,” said Ashlyn Suloff (11). Like Hannah Baker says, “everything affects everything.”  This show is a great example of this message, and it is important that the true purpose of this show is focused more on than its sometimes disturbing details.

When looking past the more “mature” aspects of Thirteen Reasons Why, it is evident that these nearly gruesome details need to be presented in order to achieve the full impact intended. “Having a mental illness is very graphic,” said Krista Proksch (11), “so you can’t portray having a mental illness without being true to it.” Yes, some scenes are hard to watch; however, they are needed to show just how intense a mental illness can be. Censorship would have taken away from the intended impact on the audience because those details are needed to tell the story. Suicide is not beautiful or graceful, and Thirteen Reasons Why does an amazing job of accurately depicting this. “Personally, I think the way they depicted suicide is extremely scary and off-putting, so I don’t think it would make anyone want to do that,” said Suloff. This show is not about glorifying suicide through  graphic scenes but about showing how our own actions can affect other people’s’ lives in ways we can’t imagine. It is important to remember that Thirteen Reasons Why is not intended to make light of suicide or mental illness, rather bring light to an issue that is so often ignored in society.

Thirteen Reasons Why is effectively a wake up call. It presents the harsh realities of mental illnesses along with the unintended consequences of others’ actions, often hurtful ones. Mental illnesses cannot be seen, and this is evident through the plot of Thirteen Reasons Why. “Even if you’re not going through something like that, I think it is still a good way to bring attention and awareness to suicide,” said Suloff. Glorifying and bringing awareness to an issue as serious as mental illness are two very obviously different situations, and this show does an astounding job of bringing awareness to the issue at hand rather than glorifying it. Each aspect and detail of both the novel and tv show remind us that our actions really do affect others, and this realizes the idea that we never know what is going on in other people’s’ lives. “These are things that are actually happening in our world and in our own communities that affect lots of people, and we may not even know,” said Proksch, “so if you go into watching it and you don’t have that responsibility, I think that’s where the jokes come out.” Mental illnesses and suicide are no laughing matters and neither is Thirteen Reasons Why. Serious measures need to be taken when bringing awareness to serious issues. Thanks to this show, individuals are able to reevaluate how they treat other people in society and realize how their actions may impact other people’s lives.

There are thirteen sides to Hannah’s story, but we do not know if we are one of thirteen to someone else. Hurtful actions along with an unrecognized brokenness can lead to devastating consequences for an individual, and we need to learn from the lessons presented in Thirteen Reasons Why in order to prevent such consequences from occurring. This show needs to be a model for what can happen when no one pays attention and no one helps. Rather than seeing it as glorification of suicide and mental illness, we need to take into account just how real this show is. Suicide and mental illness could impact anyone, but do we actually know who is suffering?

While many Netflix users binge watched the first season of the Netflix Original Series 13 Reasons Why on March 31, 2017, others had concerns regarding the series.  Based off of the 2007 book by Jay Asher, the series focuses in on teenage Hannah Baker, who has committed suicide and left 13 different tapes for each one of her classmates that had an impact on the end of her life.  Throughout the 13 episodes of the series, each tape is dedicated to a specific person and after that person has listened to the tapes, they must pass it on to the next.  While to some the show may seem like a harmless way to spend a Friday night, others such as Elana Premack Sandler, an employee of the Suicide Prevention Resource Center, are shaking their heads.

Providing consultation to organizations on using evidence-based interventions and best practices for developing suicide prevention programs, Sandler is an expert in the field of suicide prevention.  In her article on Psychology Today, she focuses in on 13 things the series got wrong.  In short, 13 Reasons Why graphically portrays an act of suicide, a portrayal which is not safe for viewers and does not fit within best practices for media representations of suicide.  13 Reasons Why also does not show what people can do to help prevent a suicide death. There isn’t any one thing, but there are a lot of things that can help provide support for people with suicide risk. As Molly Kate Cline writes in Teen Vogue, “the audience is shown what not to do without examples of what they actually should do.” Imagine if all of the 13 Reasons Why viewers got to see an adult doing a good job of supporting a teen in crisis, or another teen saying, “I’m here for you and will go with you to get help.”

Sandler goes onto explain that the series is downright unrealistic and fails to show the cold hard truth of suicide. “As suicide prevention advocate Dan Reidenberg said on Good Morning America, “The show doesn’t talk about mental illness or depression, doesn’t name those words.”By presenting suicide as the only option in Hannah’s situation (we know the ending from the beginning), 13 Reasons Why doesn’t tell the much more common story of people living with (struggling with, but living with) difficult emotions and experiences and figuring out, with support and help from others, how to survive,” says Sandler.

After a week of controversy, Netflix released this statement regarding the series:

“While many of our members find the show to be a valuable driver for starting an important conversation with their families, we have also heard concern from those who feel the series should carry additional advisories. Currently, the episodes that carry graphic content are identified as such and the series overall carries a TV-MA rating. Moving forward, we will add an additional viewer warning card before the first episode as an extra precaution for those about to start the series and have also strengthened the messaging and resource language in the existing cards for episodes that contain graphic subject matter, including 13ReasonsWhy.info — a global resource center that provides information about professional organizations that support help around the serious matters addressed in the show” (Business Insider).

Because suicide rates at the high school age are extremely high, covering the controversy of the series is difficult and must be handled in a respectful and orderly manner. Jillian Bowe (11) explained, with all the attention brought to [the show] we do need to be careful with how we bring up this topic in conversation. People need to take it at their own risk, really. Hannah is a very one-sided view of mental illness. She’s pretty stereotypical, which further ostracizes people who “don’t seem sick.” Bowe further explained,  “we also, however, have to remember that this show is meant not only for those people, but mentally stable people as well.”

13 Reasons Why takes a shot at the reality of mental illness as well as romanticizes the harsh reality of suicide.  More teenagers and young adults die from suicide than from cancer, heart disease, AIDS, birth defects, stroke, pneumonia, influenza, and chronic lung disease, combined. Each day in the United States there are an average of over 5,240 attempts by young people grades 7-12.  With suicide rates higher than ever before, one must take caution when it comes to covering the topic, caution that the series did not take.