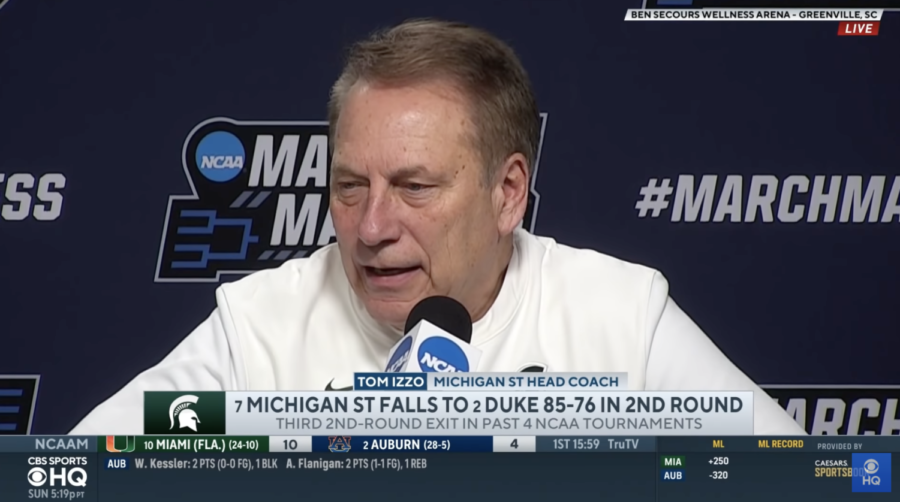 With Michigan State’s exit from this year’s March Madness tournament, questions have begun to arise about Tom Izzo’s future with the program.

Izzo is undoubtedly one of if not the greatest college basketball head coach of all time. He has 666 wins under his belt, one national championship, and is tied with the all time great Coach K for the most consecutive trips to the NCAA tournament with 24. With Coach K’s retirement looming at the end of the season, people have begun to wonder: when will Izzo decide to hang it up for good?

Izzo is 67 years old compared to Coach K’s age of 75. Izzo’s getting up there in age, and with his assistant of 16 years, Dwayne Stephens, getting the new head coaching job for the Western Michigan University basketball team, we don’t know who could come in to take over the program after Izzo leaves. I myself have a few theories on who the replacement could be. The first choice that people would think of would be the current assistant Doug Wojcik. Wojcik has been a solid assistant coach for MSU, but he is a second tier assistant coach and may not be cut out for a head coaching job at a major D1 powerhouse. Dwayne Stephens could also make a return as the head coach of the Spartans in the coming years. Now I might be grasping for straws that aren’t there, but it isn’t a totally crazy idea that Stephens could come back to the Spartans. He could lead WMU for a few seasons to learn what it means to be a head coach, and then when Izzo’s retired, he could come back to lead a program that he already knows and helped build.

My dark horse pick for the job is the current head coach of Loyola Chicago, Drew Valentine. Drew already has connections with the program because of his brother Denzel. Denzel is a former MSU basketball star and 14th overall pick in the NBA draft. Drew has done a good job at the helm of Loyola Chicago, and when the time comes, he could be at the helm of MSU. Whoever the replacement is, I’ll be sad to see the greatest college basketball coach ever leave. I hope that for Izzo’s final years at MSU we can win as much as possible and give him a well deserved send off.