‘Jurassic World: Dominion’ and the extinction of a franchise 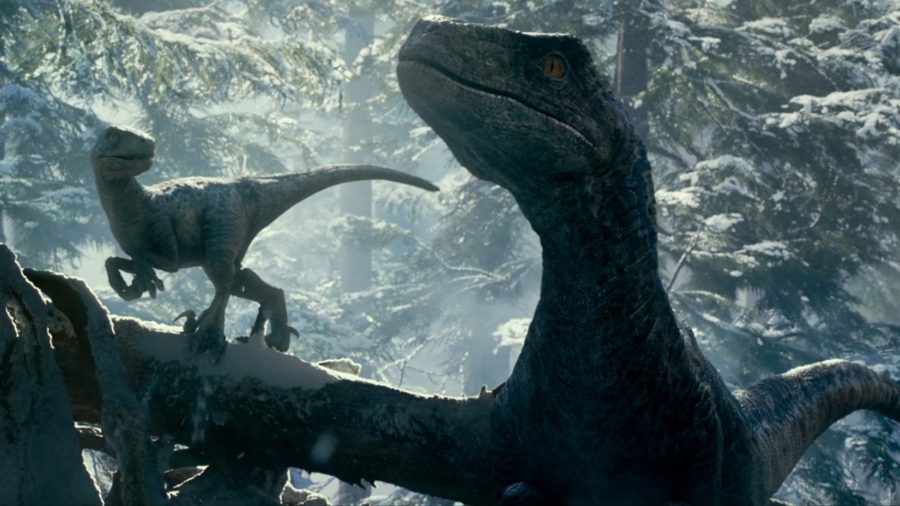 For free use from Universal Studios

Dominion, the last film for Jurassic World, comes to theaters on June 10.

Jurassic World: Dominion, the epic conclusion of the Mesozoic era, hits theaters on June 10, 2022. Following the events of the previous film, Dominion takes place in a neo-Jurassic age where dinosaurs rule the Earth. The 2022 Super Bowl trailer revealed the long-anticipated return of Laura Dern, Jeff Goldblum and Sam Neill, reprising their roles from the original 1993 blockbuster, as well as Jurassic World stars Chris Pratt and Bryce Dallas Howard.

“Dinosaurs now live—and hunt—alongside humans all over the world,” says director Colin Trevorrow, from the official Jurassic World website. “This fragile balance will reshape the future and determine, once and for all, whether human beings are to remain the apex predators on a planet they now share with history’s most fearsome creatures.”

The trailer also includes the debut of many dinosaurs never before seen in the franchise, such as Therizinosaurus, Giganotosaurus, and Pyroraptor, the first feathered dinosaur in the series. Fans are sure to be especially delighted by the comeback of the venom-spitting Dilophosaurus, which has been absent from the series for nearly thirty years. In total, over a dozen species are present in the trailer alone.

Interestingly, the trailer also includes Blue, the last Velociraptor on Earth, alongside an infant clone of herself. This strange phenomenon is likely a reference to the original Jurassic Park, in which “life finds a way” and dinosaurs manage to breed in a single-sex environment. This is the first instance of asexual reproduction in the series, and raises even more questions about these de-extinct creatures.

Despite how promising it looks, Dominion will more than likely be another victim of a prevalent trend in cinema known as the “soft reboot,” or a remake of a pop culture sensation with a subtle modern flair. “It’s a term used to denote restarted, beloved franchises or solo films which recycle the stories of the originals under the guise of something new,” writes Brianna Ziegler, writer for Paste Magazine. “The Jurassic World films are particularly heinous, in part because they are utterly sterile, boring, devoid of life and play dress-up with the original text.”

Though it is difficult to argue against such logic, dedicated Jurassic fans have come to accept this sort of mediocrity from their favorite series. While film-enthusiasts may scoff at these soulless cash-grabs, not even the most pretentious of critics can deny that dinosaurs are simply cool. People have the right to enjoy their favorite media, despite any flaws it may have, and still admit that it is terrible. Quality is subjective, of course, and there is certainly an art to great filmmaking.

None of that really matters in the case of Jurassic World: Dominion, though, because audiences know exactly what they want: Jeff Goldblum giving a speech about capitalistic hubris while simultaneously being chased by a T. rex.