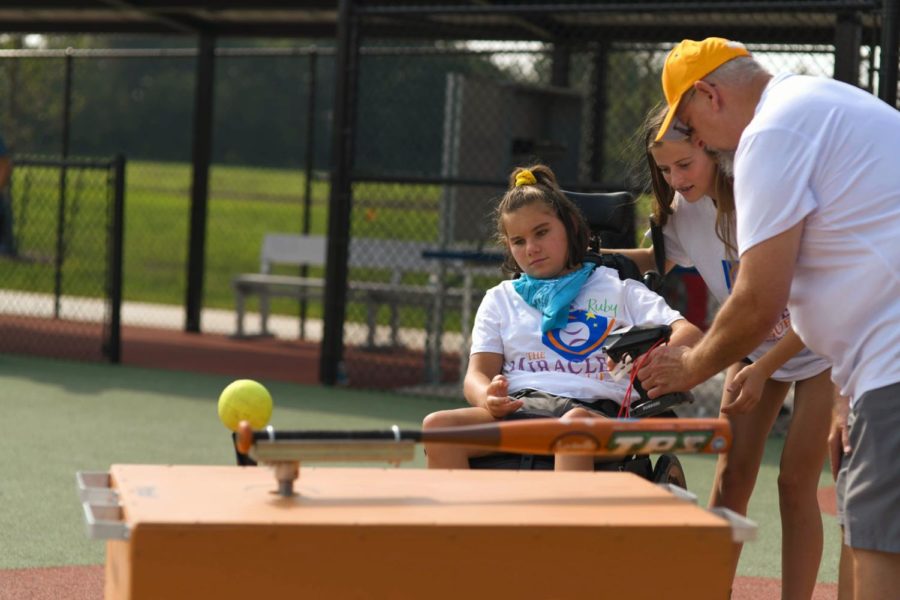 1 out of every 9 children under the age of 18 in the US today receive special education services.
Out of 72.3 million families in the US about 2 in every 7 reported having at least one member with a disability.
One in every 26 American families reported raising children with a disability.
1 in every 700 babies born each year have down syndrome.
1 in every 44 children in the US are diagnosed with autism.
Around 10,000 babies born each year have cerebral palsy.

Many people look at these statistics and see unfortunate numbers or sad truths, but they are so much more than that. Every one of those numbers represents not just a person, but the family and community that loves and supports them. These children are so much more than their disabilities; they have favorite movies, colors, foods, animals and activities just like anyone else, but unfortunately, they often have to miss out on the fun experiences that their peers enjoy because they may not be accessible to them. The Southwest Michigan Miracle League aims to remove some of these barriers, at least on the baseball field.

The Miracle League organization has been around for over 20 years and serves over 250,000 kids with disabilities per year. Last year, the Southwest Michigan chapter of the Miracle League fulfilled a $1.1 million capital campaign and completed the first phase of Miracle Field construction. The facility is a barrier-free, completely handicap accessible, rubberized, cushioned baseball field specially equipped to enable people ages 5-19 that have disabilities to play baseball. There are no transition bumps so people in wheelchairs have nothing to go over, and there is no dirt or grass; it’s all made out of poured rubber. All of the doorways and entryways are wheelchair accessible, and the players all have buddies that are there to help them hit the ball, run the bases, and essentially ensure they have a blast while staying safe. There are only 3 Miracle League fields in the state of Michigan, and only about 300 fields in the country.

Portage Northern counselor Amy DiMaggio is on the Southwest Miracle League Board of Directors and announces at some of the games. While DiMaggio is a former softball player herself, her ties to the Miracle League run much deeper than just a connection with a sport she loves: her daughter, Ruby, is a Miracle League player.

Ruby suffered birth trauma and a loss of oxygen when she was born, and having cerebral palsy prevents her from sitting, standing, walking, talking, or having any independent physical skills. “Once that happens in your life, you see the whole world differently,” DiMaggio shares. “You might have seen it around you, but when it happens to you, it changes your whole view of your whole world.”

Ruby is one of the many kids with disabilities that play baseball for the Miracle League. “My kid is a weird enigma, she’s really strange, she loves action, she loves people, she is just like a normal kid,” DiMaggio explains. “Her body is broken, her brain and muscles just aren’t communicating.” Ruby is non-verbal, and due to the fact that she doesn’t have any fine motor skills, she can’t use an iPad to communicate like some children with cerebral palsy can. This isn’t to say that she doesn’t communicate, however: she uses a special computer called a Tobii that tracks her eye movements and records how they move around a screen just like the click of a mouse. “My favorite thing to do is batting,” she expressed through her technology. “‘I also like pitching.”

DiMaggio and Ruby were first introduced to the Miracle League when a friend invited them to a practice. DiMaggio remembers being amazed by how everything worked, and she was even more impressed when she found out that out of all the people on the non-profit board of directors for the Miracle League, not one person had any family members with disabilities. “That completely shocked me, like why would somebody put so much time and effort and passion into something they couldn’t totally understand?” DiMaggio says. “Well, because of empathy and compassion and people doing good things from the kindness of their hearts.”

After this first encounter, DiMaggio was invited to join the board for a parent perspective. “When Ruby was playing, the mom hat was the last hat I was wearing. I was so excited and happy to see the other kids and to see their parents get to sit in the stands and watch their kid play,” she shares. “They didn’t have to go out there and do it for them, they didn’t have to adapt and modify, it was already done for them. The parents just got to sit back and watch their kid with special needs play baseball and do something really normal.”

The Miracle League field isn’t just for children with physical disabilities. “We had several kids on the autism spectrum who just thrived,” DiMaggio recalls. “Some of them didn’t need any physical help at all, they just needed the buddy, the support and awareness to guide them, to tell them where to go and what to do. For most of those kids it was just a friendship, a real friendship with a real kid.”

The benefits of participating in the Miracle League were even documented during the season by occupational therapists who came to watch their patients play baseball. They kept data on the number of negative instances, or negative outbursts, that their kids had, and from the week they started to the end of the six week season, there was a 40-45% drop in negative behaviors and an increase in their positive responses to their instructions and their routines. “This was a gift from God. We looked forward to Saturday every week. It was so great to see my kids smiling and laughing with other children,” shared a parent whose child was evaluated in the study.

DiMaggio saw these benefits and bonds first hand. “There were a couple moments where there was this little boy who was probably 5 or 6 years old, and he had to use AFOs (ankle/foot orthotics) and there were these two Western college boys and he was holding their hands and looking up at them and they were looking down at him, and they were all just smiling so much, and this kid was just in his happy place,” she says. “The next week, those Western kids came up and asked where the boy was, and he wasn’t there yet, and those two college boys were absolutely bummed that their kid wasn’t there.”

Being a buddy is just one way that people can get involved with the Miracle League. They can also volunteer to coach or serve on the youth board, and the current youth board president, Kaitlyn Walsh, has a special connection to DiMaggio and Ruby. “When I was younger, I met my neighbor, Ruby, who has cerebral palsy. I became really close with Ruby and her family and learned a lot about disabilities and inclusion, eventually I even became a certified caregiver for Ruby, so I am able to babysit her,” she explains. “After becoming friends with Ruby, I was inspired to help people with special needs to be more included, so I joined the miracle league youth board, and shortly after became the president to help pursue this passion.”

Walsh works closely with the vice president of the youth board, Lucy Cheatham, to organize meetings and fundraisers for the league. “Our main job, however, is participating as “buddies” during the games, to ensure that [players] are safe and having as much fun as possible throughout the experience,” Walsh shares. Aside from their shared passion, Walsh and Cheatham have something else in common: they are also both students at Portage Central.

“I have had the privilege of crossing paths with so many amazing people who have disabilities, and some of them have genuinely changed my life so much,” Cheatham says. “It’s so important for people to recognize the number of capabilities that children with disabilities have and how important it is for those children to have the opportunities to express them. They have made such an impact on my life and seeing them grow is so inspiring!”

DiMaggio would love to see more Portage Northern students volunteer with the Miracle League. “I really want to get exposure for our kids,” DiMaggio explains. “And I think Northerners have always been amazing at that, because we have some pretty unique kids here, with physical needs, cognitive needs, kids who are on the autism spectrum, or who look a little different. Northern has a lot of diversity and compassion for these kids.”

This upcoming season starts April 30th, and the League badly needs buddies. Buddies are what make the magic happen; when someone signs up to be a buddy, they go through brief training about how to make sure the kids are safe and having fun. “There was this one little boy that a lot of the highschool volunteers connected with and he absolutely loved all of us,” shares Cheatham. “One of my favorite moments was watching him go from each volunteer and hugging them for probably five minutes each! It was so wholesome and really showed us volunteers the impact we have on these kids.”

This year, there are six Saturday game days with two games each, and volunteers can sign up to be a buddy for one game or both. Games last about an hour each. Click here for information on how to sign up to play or volunteer.