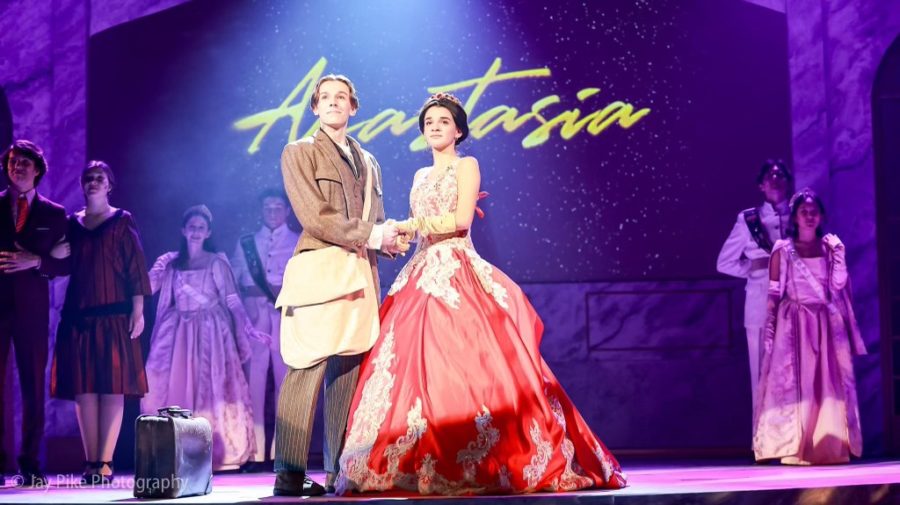 Take a journey to the past through Portage Central’s Anastasia! Fans of the 20th Century Fox movie will recall the plot, but to those unfamiliar, the story is set in post-Bolshevik Revolution Russia, following an amnesiac orphan named Anya, a dashing conman named Dimitry, and ex-aristocrat Vlad Popov. Anya desires to find out who she is and if she has a family, while Dimitry and Vlad hatch a plot to convince the Dowager Empress that Anya is the missing Grand Duchess Anastasia in order to receive a hefty reward. As they travel towards Paris together to reach their goals, they are pursued by a young Bolshevik officer, Gleb Vaganov, whose orders are to kill Anastasia, but he struggles with the tough moral decision of following those orders or doing what he knows is right.

Although the show looks effortless from an audience perspective, the people involved know it’s a bit of a different story. “The most challenging part of being in the show has probably been maintaining a stress free environment,” said freshman Carly Koch, who plays Anya. “I’m so grateful for the opportunity to do such a wonderful show, but it’s a lot, and it’s very time consuming.” Although that work-life balance can be a bit of a challenge, Koch says that her favorite part about being in Anastasia has definitely been all the amazing connections she’s made with people. Junior April Heskett, one of the dance captains, also feels the bonds that connect the cast and crew. “I love meeting new people and sharing the experience of putting on an amazing show together!” she said. “It’s something that all of us can be proud of and that brings the cast and the crew together.”

From the perspective of an audience member, this show was incredible! The talent was jaw dropping, the costumes were stunning, and every scene was absolutely enthralling! I personally was blown away by the level of professionalism and talent from the members of the show. Every single person did a fantastic job, and the singing, acting, and dancing were all on point! I loved how well everyone seemed to know their own characters, as well as the characters around them. Each character had an intense arc and personal journey, which I found to be really interesting. Perhaps the most prominent of those for me was Gleb Vaganov. He was such a morally gray character, and his internal struggle between the two sides of himself was shown really well. Junior Carter Barnes, who played the role, said “I don’t think of myself as “evil”, and neither does Gleb, but there’s that contrast between finishing the job for his father and having feelings for Anya.” Like Barnes, all of the actors in the show seemed to understand their characters fully, as well as what drives them. The chemistry between actors was great, and everyone seemed to embody their roles to the fullest, making this an incredible show to see.

If you missed out on this incredible show, don’t worry! Shows will be continuing next Friday and Saturday at 7:30, with a matinee on Sunday at 2:00! Student night is Thursday at 7:00 with $5 tickets for students (if you bring your ID!), so hurry up and get your tickets, found here: https://pchsboxoffice.ludus.com/index.php

Go see this amazing show and be reminded of what home, love, and family truly means!