Huskies Game of the Week 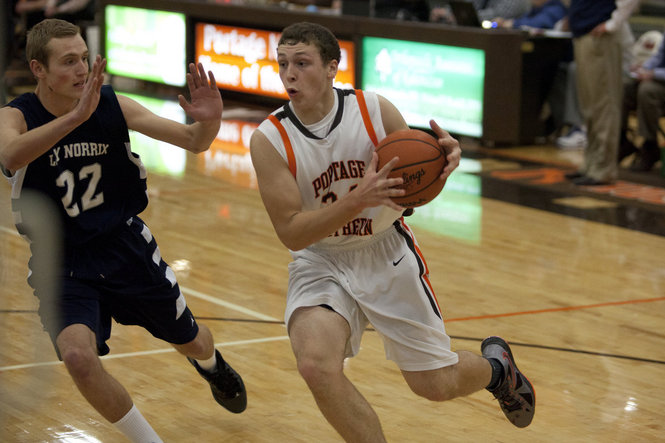 WHAT HAPPENED: In his first game back since suffering a shoulder injury against Benton Harbor on December 13th, Portage Northern senior guard Brandon Bye would once again prove his value to a young Portage Northern team. In a game where points were hard to come by, Northern was able to get a late push in its 3rd overtime game of the year, and squeak out a one point victory. Junior Tre Humes, who hit a 3 pointer at the buzzer in regulation to force the game into overtime, found himself at the line for a one-and-one down by 1, with around 4 seconds left in the overtime period. Humes missed the free throw, but Bye was able to grab the ball and get up a shot as time expired. Northern improved to 5-5, the most wins for Portage Northern since 2011.

THE GOOD: Portage Northern’s bench – Juniors Davontae Lassiter and Nick Herbert were both late game substitutions and would make a significant impact on the outcome of the game. With the starters looking worn down late, they came in and forced huge turnovers and jolted some energy that would lead to the comeback effort.

STAR OF THE GAME: Portage Northern sophomore Daryn Snow showed once again why he’s one of the best players in the conference. Snow helped jump start the Huskie offense after a slow first half in which they only scored 17 points. He would finish the game with a quiet 19 point effort.

UP NEXT: The Huskies are back at home Friday night (1/24) to take on division foe Stevensville Lakeshore. Northern will be looking to win back to back games against a state contender from the past two years. This should be a good game of two teams trying to find themselves.