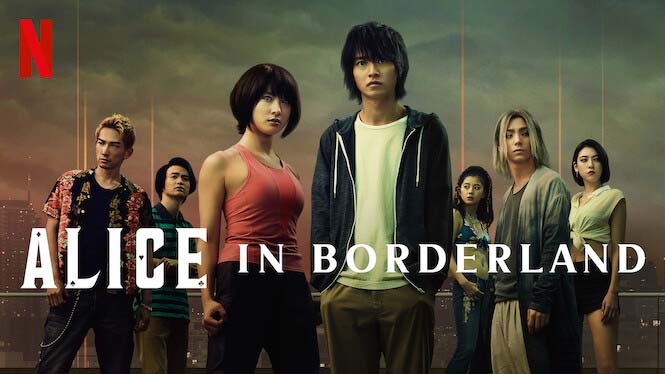 This the Netflix original is a live-action adaptation of the Japanese manga of the same name.

Alice in Borderland is a popular Japanese manga written and illustrated by Haro Aso. The manga was serialized from November 5, 2010 to March 2, 2016 and contains 18 volumes in total. Recently, Alice in Borderland has been adapted into a live action series that was released on Netflix on December 10, 2020. The series has 8 episodes released and Netflix has already renewed it for a second season.

Alice in Borderland features high schooler Arisu (Kento Yamazaki) who is an obsessive gamer that would rather put his all into a game rather than his future. Arisu and his friends Karube (Keita Machida), a bartender, and Chota (Yuki Morinaga), an IT company worker, find themselves in a completely deserted Tokyo after hiding in a bathroom stall. The three witness ‘fireworks’ go off in the distance and decide to follow the light where they end up being forcefully made to play games that end in life or death.

The series incorporates aspects found in Alice in Wonderland, but alters them so they feel completely brand new and fresh. For example, in the original Alice in Wonderland, the cards were all characters, but in Alice in Borderland, the suits of the cards determine the type of game that will be played and the number determines the difficulty level. Aces have the lowest difficulty levels whilst the kings have the highest. All 52 cards must be obtained in order for the players to return back to their current world. This concept is unique and entertaining to watch unfold as it keeps every viewer on the edge of their seat. From strength, to intelligence, to teamwork, to betrayal, playing cards has never been so deadly before.

I must say, rarely do live action adaptations do the original source work justice. However, even though Netflix’s adaptation drifted a bit from the manga when it came to the actual games themselves, I think it added a gut-wrenching feel to it. I quickly grew attached to the characters because each of them possess qualities that are far from perfect, which adds relatability to the story; they can be selfish, naive and weak, but in the end they all have this charisma that makes them oddly appealing despite their flaws. There is so much growth in all the characters, some for the worst, and they are able to find their own sense of self.

Also, there are valuable life lessons within this series. In the beginning, main character Arisu was constantly compared to his younger brother by his father. These comparisons berated Arisu and made him feel as if he would never amount to anything worthwhile. He felt defeated and dejected that he wished to escape from his current demanding reality. Despite the dangerous and psychological challenges Borderland offers Arisu, he grows into a person much more confident in his skills. Mental health has been a huge concern for many and despite the gruesome nature of this series, I feel that it is able to portray that even if the world seems to be shrouded in darkness, there is still hope.

Through these life or death games, Arisu is able to find his own self worth and discover his innermost strengths. Alice in Borderland is able to show audiences that they are the only ones who can decide their own self worth and that it is okay to reach out to others if they need help and reassurance. There is only room to grow for Arisu as the series progresses to the next season where the games will become even more deadly.