Among Us: wildly popular, wickedly fun 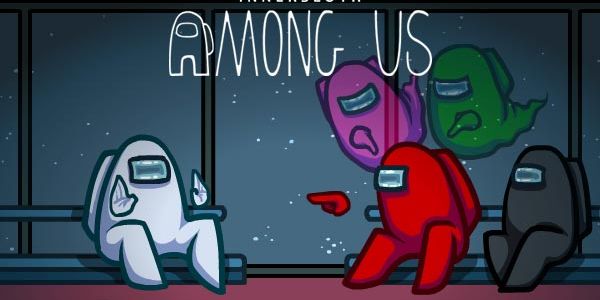 As you’ve probably heard through social media and friends, Among Us is an extremely popular game on the app store and on computers. It was created in June of 2018, but just received a big promotion  after some well known creators showed the world this game. Many people started playing it and it’s gotten a lot of clout in the last few months, earning a #1 spot in the app store with over 3.8 concurrent players at any one time.  InnerSloth is the creator of Among Us, who has also created the Dig2China game series, and is also the creator of the Henry the Stickman Collection. Among Us is a free game on the app store, and costs only five dollars on the computer. Many players use discord to talk during discussion time. This game has five to ten minute long rounds, so you can always play when you have free time, even if it’s only a few minutes.

Among Us is a game based on deceit and lies. In Among Us, there are two roles: Crewmate and Impostor. Upon loading the game, you are told to SHHH!, or to be quiet, so people don’t get information when they shouldn’t. When that screen goes away, you will be given the role of Crewmate or Impostor: depending on the rule set, you have a higher or lower chance of getting Impostor.

Upon receiving your role, you need to complete your mission. As a Crewmate, your job is to complete numerous tasks that range in difficulty or short to long tasks, like Medbay, Simon Says, Wiring, ect. Some tasks can even prove you are innocent, these are called visual tasks. These tasks must be completed by all Crewmates to get what is called a “Task Win.” But there is another way to win: the other way to win is to vote out Impostors. Voting the Impostors is the most common way to win between the two. In order to vote out the Impostors, you need to use your detective skills to find who killed your allies. In order to find out who did it, you need to communicate. There is only one time you should be communicating with your allies, and that is during Discussion Time. In order to enter Discussion Time, you need to either find a dead body and report it or click the Emergency Meeting button. Upon one of those happening, you are taken to a screen showing who is dead and who isn’t. During this time, you should be deciphering who the Impostor is and vote them out.

But what if you are the imposter? As the Impostor, it is your goal to kill all Crewmates without being caught. For this win to occur, the number of Impostors need to be equal to Crewmates. In order to not be caught, you are given few but quite useful tools. These tools are known as Sabotages. Sabotages allow you to do various things, like closing doors, turning the lights off, turning off the coms, turning off your oxygen supply, and killing the reactor. All sabotages have a purpose: turning off the lights allows only impostors to see the entire room, where Crewmates can see only a small portion. Other sabotages like the 02 and Reactor will automatically kill all Crewmates if not taken care off, but don’t worry, they aren’t hard or long, they just require teamwork. The other sabotage, communication, disables the ability to do certain tasks and use the cameras. Also, there can be up to 3 Impostors or up to 9 Crewmates, but there can only be 10 people in total at a time.

In the game there are a total of 3 maps: The Skeld, a giant ship that is in the middle of space, Mira Hq, a floating aircraft that is above land on an unknown planet, and Polus, a planet that the Crewmate are investigating. These maps all have their own special twist and turns on the game, like how The Skeld and Polus have a camera system, Polus has a Vitals Station to check who is alive, and Mira Hq has a sensor system to see who went where. Each map is also unique: bigger or smaller, harder or easier, more entertaining or requiring more wits.

As you play Among Us, you will learn different tips and tricks you can use to play. Having played over 100 hours myself on Among Us, I have learned a lot of cool things you can use to your advantage. First, we will start with beginner tips and tricks. When you first start the game, you should learn what tasks are where and the map layout. Learning both of these will allow you to lie and give you an alibi to give to players to seem more like a Crewmate than an Impostor.

Another big tip is to utilize the lights sabotage. The lights sabotage allows you to get rid of information, being able to see is the biggest use of information for crewmates. As a Crewmate it is important to learn the tasks too; this will allow you to realize if an Impostor is doing a task in the wrong order. For example, the task on The Skeld: there is a two part task where you clear out junk on the ship, and they must be done in a certain order. If you notice this, then you can call out Impostors who are trying to fake tasks.

There are also more experienced tips and tricks. Paying attention to information given out is sometimes really hard, so if you pay close attention, you will be able to call out Impostors, but this might side track you from doing your tasks, so if you can learn to do both it will become a big help in the long run. A good tip for Impostor is to learn how to play on your teammates’ alibis: if you learn more about the game, you can do your best to make your teammate’s alibi seem more solid. This will allow suspicion to be thrown off of them, allowing them to do more risky plays.

Now let’s get into some of the more risky or expert level tips and tricks. A huge trick that requires a lot of patience is to learn everyone’s play style. This will consist of how they play Impostor/Crewmate, how hard they usually push players, how they act in certain scenarios, and how they act when lying. Learning these things will allow you to play on flaws and find the truth behind something or to throw suspicion off of you. The more you play and use these tips and tricks the easier it will be to play and enjoy the game.

Since the game blew up, a lot of popular YouTubers and Twitch streamers have switched to playing Among Us with fellow content creators. Pewdiepie, one of the most popular creators on YouTube, has started playing Among Us more than doing his usual content. A lot of the new players even came specifically from him. Pokimane, Valkyrae, and other creators from Offline TV have also been playing this game with other content creators instead of doing the usual Fortnite streams/videos. Another prominent group in this community is the SR group, which have blown up on both YouTube and Twitch, and they mainly play with their tight group of friends. The Mario Kart Wii community has even made a Discord server where you can play Among Us with some people from the Mario Kart Wii community. The game overall has had a huge growth in the amount of players and has had so much influence from content creators and other game communities.

As you can tell, this game has many reasons for its newfound popularity. It’s got lots of different ways to interact with friends and make new friends while never getting bored of it. The game has many possibilities, and some people even play an Among Us version of “hide and seek” where the lights are all off and the Crewmates try to finish all of their tasks before the Imposter kills them all. Due to the settings being customizable for each lobby, the game has endless possibilities and people can play for hours on end without a single game being the same. This drama filled murder mystery-like game is definitely one to check out the next time you’re scrolling through the app store.