Masked singers, but not a masked audience 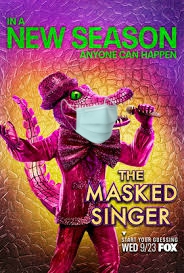 My family and I sat down together to watch the fourth season of The Masked Singer. As my other family members enjoyed the amazing costumes and incredible singing abilities (or lack thereof), I couldn’t but be distracted by a glaring problem: there wasn’t a single member in the very full audience wearing a mask. I was so shocked by what I was seeing, so I immediately consulted google to find out that the crowded audience shown is actually fake.

In many of the non-scripted television shows that depend on live audiences and judges, the producers have chosen to take a non-traditional approach. They do this by having the judges video stream the performances from their homes. This appears to be the safest way to go about making the television shows that America has grown to love. The Masked Singer chose to take a different route however. The four judges, Jenny McCarthy, Ken Jeong, Nicole Scherzinger, and Robin Thicke are all watching the contestants six feet apart as the acts go on. “From the day we started lockdown, it’s been a process from how do we get back to filming in a safe way with high production values. It was incredibly challenging, creating music tracks and vocal coaching people remotely—incredibly difficult. And then creating the systems to ensure people are separated and safe when they’re on set, not allowing different areas of the crew to populate areas,” said Plestis.

Although the large audience shown is in fact fake, there is still a small studio audience seated behind the judges, as confirmed by Rob Wade. These audience members aren’t pictured in the show itself, but the producer admits to the fact that they are there. “We went above and beyond the outlines of the CDC and local authorities in order to keep people safe,” said Craig Plestis.

It is clear that the producers wanted to go about the show in a safe manner, but their motives may be more than just to entertain the masses. “On a scripted show, they rent their sets for the entire year. If you stop on one of those shows for a week or two, there’s obviously a problem with the scheduling and the cost but on non-scripted show if you get pushed for a week or two, you suddenly don’t have a studio, people that were supposed to be there aren’t available, the knock on effect is crippling so it was good to get it done,” he said. Although it is clear that the team behind the Masked Singer had intentions to try to keep the normalcy, it may be mostly due to financial issues.

So if there isn’t an audience, how is the show being judged? “It feels that through virtual reality and composite and reaction shots, we managed to create the feeling that there were people in the room. It’s going to feel very much like [previous seasons], it’s not going to feel different. You’ll notice that the audience will feel like it’s behind the judges. The one thing I’m expecting is for people to say is ‘How come they’re not COVID friendly? The audience aren’t wearing masks.’ Through various quarantining and various camera tricks, we’ve managed to do it,” said Wade. Once again, it is seen that the producers want it to seem as if nothing is wrong by creating these virtual reality audiences and images. However, this virtual reality may be creating a bias towards certain acts. The supposed audience’s reactions are based solely off of what the judges were expressing.

Now that we are in an age where the new “normal” is far from what we used to know, it seems odd that television shows such as the Masked Singer are trying to pretend as if COVID-19 isn’t affecting the entire world.