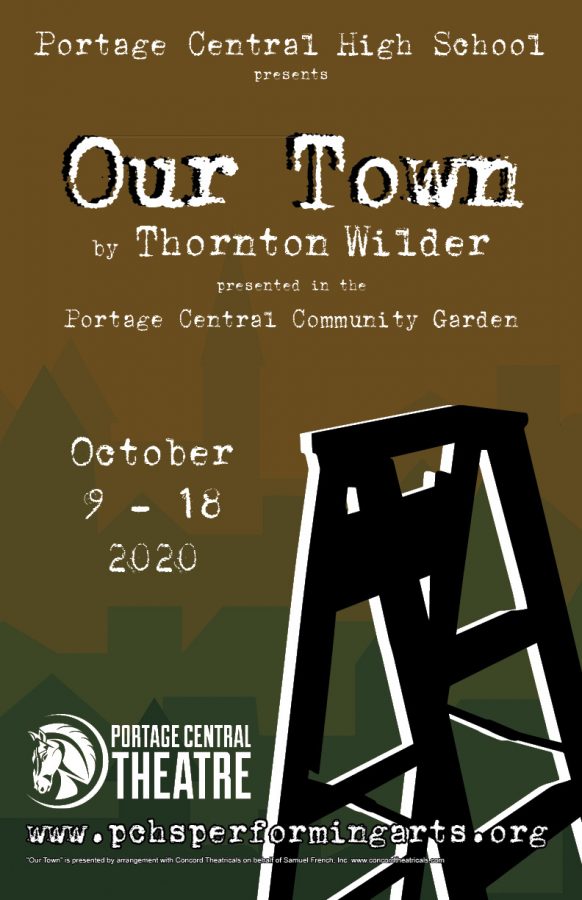 “We all know that something is eternal…” This sentiment is spoken by the narrator of the play, Our Town by Thornton Wilder and rings true throughout the three acts as well as in our lives today. The spirit of drama and theater is still very much alive and eternal even in these troubling times here in our own town, especially at Portage Central High School. After only a month of preparation and hard work, PCHS presents Our Town by Thornton Wilder. This is an outdoor play because of COVID-19 restrictions.  Opening night was Friday, October 9th, and, fortunately, I was given the perfect opportunity to see it on Saturday, October 10th, with good, although windy, weather.

Prior to Saturday, I had never seen Our Town and had no idea what it was about, aside from the possibility of a cute love story and the charm of a small town. I was pleasantly surprised by the emotion and depth of the story. Our Town may seem like a quick old-timey show about kids growing up and falling in love, but it was so much more than that.

The time period of the play and the symbolism woven into the script was  showcased by the talented cast and crew of PCHS who threw the whole thing together in just a month. “We held auditions September 10 and 11 and the play opened on October 9,” PCHS English teacher and play director Ashley Bowen says. “So we rehearsed, organized, and built the whole show in less than a month.  We had 3 Saturdays to build the stage and all of the costumes.” Even with the shortened rehearsal and set-up time, the entire company rose to the challenge to pull it all together. “The show was put all together in about 4 weeks- which is a much shorter time than everyone is used to for our fall play, but it’s been a wonderful challenge,” senior actress Leah Baker said.

Of course, none of this would be possible without the amazing backstage, behind-the-scenes crew at PCHS. Now, the Portage high schools always have an amazing crew, but this year posed many challenges for the crew because of COVID-19. “One of the biggest crew restrictions was our light design,” senior stage manager Carly Wolfe said. “Normally we have a catwalk and many lights/spotlights above our stage, but that was not possible because we were outside! It’s[the lighting design] quite a process!” Also, because the actors used pantomime instead of props in their performance, the crew also had the job of creating sound effects for pretend objects such as milk bottles rattling against each other and trains chugging along railroad tracks. Once again, there were certain limitations to both the cast and crew, but they pulled it off gracefully nonetheless.

Senior Leah Baker played the female lead, Emily Webb, in Our Town. She did a wonderful job portraying Emily and showing her character growth and personal discoveries over the three acts. Baker even found herself relating to the character and her struggles in life. “I have personally learned so much about the importance of appreciating all of the small, wonderful things that we do in our everyday lives,” Baker explains. “That goes for the audience as well- just by listening to all of the very real and beautiful words being said on stage, you start to realize just how important the little things in life are.” It was very apparent in Baker’s acting just how important the message of Our Town is. I could really feel all of Emily’s anguish in Baker’s words, which is a hard thing to do with such little preparation and at such a young age.

Aside from Baker, the entire cast did a phenomenal job showing off the small town charm and what it was like in the early 1900’s. All of the actors showed a grand display of the full range of emotions that people go through with all of the big changes and experiences in life. Their pantomiming was on point and I was not let down by their portrayals of all the complex characters.

Those who know their fair share about classic literature know that each act of Our Town gets progressively more intense with heavier themes. “…a thousand years from now—this is the way we were in the provinces north of New York at the beginning of the twentieth century.—This is the way we were: in our growing up and in our marrying and in our living and in our dying.” The first act is about the everyday life of the townspeople of Grover’s Corners, New Hampshire; the “living” aspect of that quote from the Stage Manager/Narrator character in Our Town. The second act moves into deeper territory with the prospect of love and marriage. The characters face a truly personal and deep question of whether or whether not to marry based on their own wants, needs, and society’s expectations during the beginning of the 20th century. Thus fulfilling the “marrying” aspect of the Stage Manager’s line. I found it interesting that during the second act, the crowd of characters faces away from the audience, but in the third act when the “dying” aspect of the quote is coming into play, the characters face the audience, but it’s almost like they’re in a daze. I took this difference to mean that in the second act when the characters are just trying to get to the next stage of life, they’re more focused on the next steps and whatever the next move in life is rather than looking at the world and just being. In the third act, however, the characters face the audience which I took as a sign that when dying has become a real part of the story, only then are the characters noticing the world and trying to stop and pay attention to the little things. Emily talks about all of these themes in the second and third acts; deciding to marry and only slowing down to really live when you can’t anymore. She talks about all of these things in her lines, but I thought it was an interesting and symbolic choice to portray it all by changing the direction of the seating: Keeping your back to the world and only really stopping and paying attention when all that’s left of you is a headstone looking out over the gloom of a cemetery.

With all of this being said, I really encourage you to go and see this wonderful performance. A mask is required to enjoy the show and must be worn at all times. Anyone attending should bring a lawn chair to set up in their socially-distanced “pod.” Tissues would also be a good thing to bring because, for all the emotional people out there, Our Town could definitely be described as a tear-jerker, but it is also a great play for all ages to enjoy what with all the great themes and historical lessons to learn from it. Their upcoming performances can be found at http://www.pchsperformingarts.org/ where tickets for each show can also be purchased and are selling fast.

On the other side of Portage, this year’s winter play at Portage Northern High School is actually a student-run collection of student-written short plays or monologues! While it’s still in the writing and production stage, there are a few known variables at this time: The plays will be held in Northern’s black-box theater and will be livestreamed for any attendees who can’t be in the theater during the shows. The plays will be reflections on the past year with all its ups and downs. Student submissions are still being collected and more information about it can be found at http://www.pndrama.org/.

Please go and support Portage Performing Arts and Drama Departments by watching PCHS’s Our Town and submitting a piece for the PNHS Winter Play.