Law and order is a losing strategy 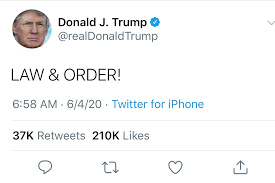 Law and order. Whether printed on t-shirts, declared in speeches or spelled out in all caps in one of the President’s tweets, these words have been front and center in the Trump reelection campaign.

In fact, they’ve been a key component of the Republican party’s platform for decades. It was Richard Nixon who first utilized the phrase in his 1968 presidential bid. The nation had been rocked by a year of widespread revolts fueled by racial injustice, political assassinations, and war. Americans were desperate for stability and they found it in Nixon’s law and order message, helping him to win the election. Since then, the philosophy of law and order has been passed down through generations of Republican Presidents and with great success.

It is no surprise then that President Trump has embraced it with open arms, especially considering that America is going through a racial reckoning like it did in 1968. What the Trump campaign doesn’t understand is that a law and order message won’t work anymore.

America has changed radically since the 1960s. It’s even changed since 2016. To start with, the number of people from different racial and ethnic groups has been growing steadily. The United States Census projects that the country will become minority white by 2045. In order to be successful, political messaging should be aimed at reaching the increasing number of minority voters.

For this reason, law and order, which is directed at white voters, won’t be as effective. Along with increased diversity, the GOP has to manage a shrinking base of white voters. More specifically, working-class voters under the age of 40. A Pew Research Center survey conducted in late June found that they are less likely to vote for the President than their parents or grandparents.  Decreased support from working-class whites could be partially due to the law and order message.

The economic impact of Covid-19 has been particularly difficult for working class families. They look to the President for empathy and hope, but are given law and order: fear and panic. To win the Presidency, Republicans need a message that has the support of the American people. By embracing law and order, Republicans are driving away huge swaths of the people: people of color and younger, white working-class people. That’s why a law and order GOP can’t win in today’s America.