Top of the world: Greed satirically targets the top one percent and the billion dollar fast fashion industry 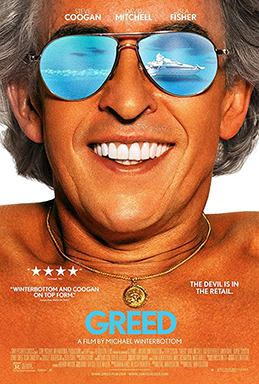 “Only connect.” The E.M. Forster quote was Greed’s beginning and end. The movie shows the bright and beautiful world of the top one percent, but with billionaires at the forefront, it seems the marketing fell flat. Even with this barrier, the message it sends is far more important. It tackles the wealth gap, the Syrian refugee crisis, and fast fashion in a seemingly shallow, yet satirical, manner.

On the surface, the story follows fashion king, Sir Richard McCreadie, played by Steve Coogan, nicknamed Greedy McCreadie by school friends, tabloids, parliament, and himself. Coogan paints a caricature of Topshop mogul Sir Philip Green. This is not confirmed but in digging into the past of Green and Topshop, it becomes clear and the ideology is widely accepted.

McCreadie’s entire family, ex-wife Samantha (Isla Fisher), children (Asa Butterfield, Sophie Cookson, Matt Bentley), and his plethora of workers (Dinita Gohil, Jonny Sweet, Sarah Solemani) all have a heavy hand in the shady trade of McCreadie’s stores. As someone who is not business or numbers savvy, the way McCreadie was able to open all his stores is a little fuzzy. What a casual watcher can conclude is that his methods are neither legal or illegal. It’s a case of being so widely known and used that it becomes useless to try and stop it.

The story is filmed in a non linear structure, switching between flashbacks to McCreadie’s rise as the ‘King of the High Streets’ and the planning of McCreadie’s sixtieth birthday bash. The party is supposed to be the biggest he’s ever thrown in an effort to repair his tattered image. Though he is the story’s center of attention, the audience views the party planning the most through the eyes of Nick, McCreadie’s biographer.

That only scratches the surface of the movie’s meaning. What is more important, and more shocking, is the facts laid out for the ending credits. Throughout the film, we see McCreadie doing shady business tactics in sweatshops in Sri Lanka, with reference to other sweatshops in Bangladesh and Myanmar. These sweatshops and the issue of fast fashion is really what this movie means to tackle.

McCreadie’s banker is always seen giving bucketfuls of loans to McCreadie but the juxtaposition of the crisp tan and veneers on the business owner and the stark conditions of the shops he uses and the living conditions of his workers is two totally separate worlds. At the end of the film, the credits show startling facts about how much a worker might be paid, around 54 United States cents, and just how many garments this slave labor makes for first world countries, about one billion garments annually.

As poignant and important as these points are, the movie’s director, Michael Winterbottom says the end credits were heavily censored by the head of Sony Pictures International, Laine Kline. Winterbottom originally had the end credits specifically comparing the third world worker’s wage to that of the executive of H&M and Zara, as these two companies are two of the leading users of fast fashion and sweatshops. These concepts made it into a screen test of the film and despite it being extremely popular to viewers, Kline removed it to preserve existing or future relations with the companies and their corresponding executives.

Beyond these salient points, the film also tackles the Syrian refugee crisis. The film takes place on the island Kyronos, in Greece, which has a shore facing Syria. McCreadie wants the shore line for his party, but it’s currently occupied by a troop of Syrian refugees, from a young infant to grandmothers.  At the beginning, they’re all civil, both McCreadie’s cronies and the refugees, but as the party inches closer, tensions turn violent. It climaxes to the point that McCreadie’s party planner is screaming to have a group of the children arrested for stealing silver.

In the same end cards as the fast fashion facts, there were also facts about the refugee crisis, such as the 13.1 million citizens displaced by the civil war and the fact that most of the refugees are women and children. What makes the points hit home just a little more is the leader of the refugee troop, Kareem, is based on the actor, Kareem Alkabbani’s, true refugee story. While audiences really don’t know how much of his story is truly shown, simply knowing the abuse his troop goes through at the hands of billionaires is somewhat common is enough to make anyone’s skin crawl

When I walked out of that theater, the only thing I was capable of saying was “this is the most important movie of the year, and no one is going to see it.”  I hope that people do their research on this movie and realize just how important it is and support it. The points made are so swept under the rug that you don’t realize it until it slaps you in the face with them at the very end. This makes the film something enjoyable to watch while also making it significant and necessary.