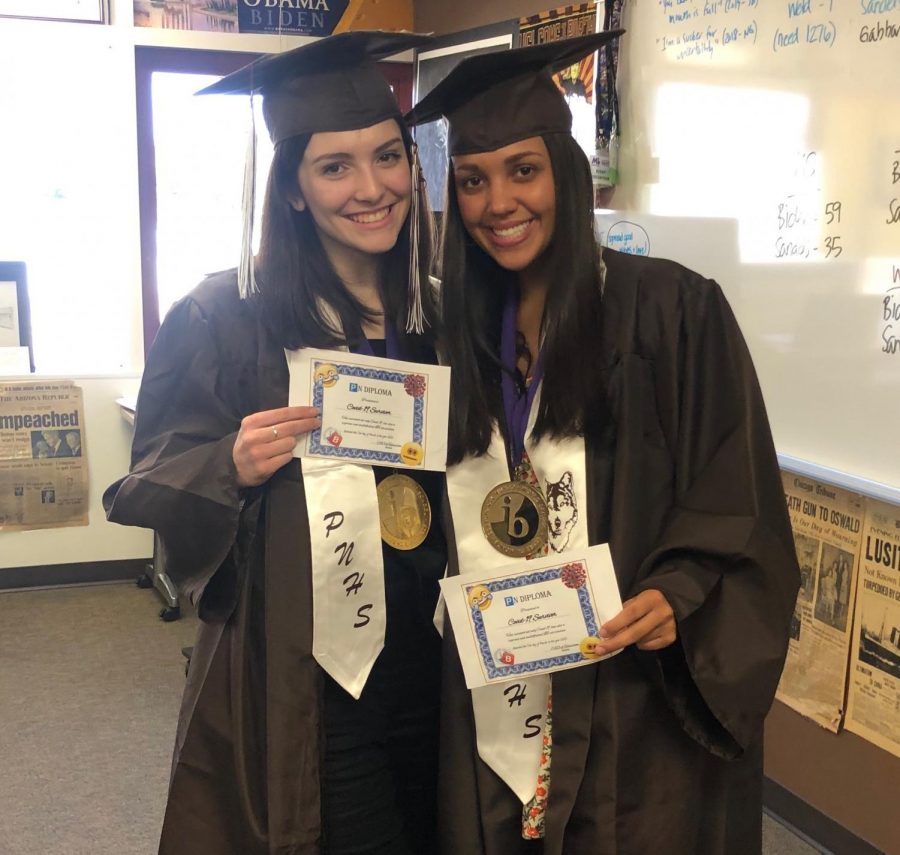 The class of 2020 drudged on through the home stretch, battling senioritis and grinding out a year that felt like it would never end. That is, until everything changed at 11:05 on the night of March 12, when a State of Emergency was declared by Governor Gretchen Whitmer for preventative action toward the COVID-19 virus which cancelled school from March 16th to April 5th, 2020.

“This is a necessary step to protect our kids, our families, and our overall public health,” Whitmer indicated, while jaws dropped all over the state watching her address.  “I am working with partners across state governments to ensure educators, parents, and students have the support they need during this time. I know this will be a tough time, but we’re doing this to keep the most people we can safe.”

Just like that, everything came to a grinding halt. Quarter 3. The first week of spring sports. Countless extracurricular events. “Honestly I was very upset about this cancelling, because my forensics season was over, and the IB Diploma which I’ve worked for so long, was all really being challenged,” said senior Gracie McGrath. “I was not at all surprised when they announced that school would be closing,” said senior Carter Wells, “but it was still shocking to realize how big this was.”

The announcement, which came on a Thursday night, gave Portage students and staff just a half day on Friday to process this life-altering information. “I found out about the school closure as many other people did live on Thursday night watching the Governor speak,” shared IB Program Coordinator Rick Searing. “Like lots of others, I was stunned to hear that we would not be having school until April. I knew that there was a strong possibility that we would have to close at some point due to Coronavirus, but it was still a shock to hear that it was actually going to become a reality.”

While Governor Whitmer was explaining her plan for Michigan K-12 public schools, PN IB seniors were developing a plan of their own. “The 7th Hour Theory of Knowledge (TOK) class has been talking about the Coronavirus and how it’s inching towards us,” says NHS president, senior David Le. “Last night, while I was waiting for new music to drop from several artists, I received the notification that there will be no school starting Monday. I was shocked because it finally happened, but I did not want to just go to school the next day for a boring half-day.” Le’s bond with his graduating class came to the forefront of his mind: “It might be my last time seeing my classmates in 7th hour,” he said. “So I texted our group chat and proposed the plan of a mock graduation.”

Word travelled quickly, and by 7:40 the next morning, the class of 2020 was prepared to go out in grand style. “It started off as a joke,” admitted senior Zoe Zeluff. “Then, we were all like, wait, what if we get Searing on board?” What started as a student idea quickly grew into a full-fledged plan with teacher support. “This was the brainchild of our students,” said TOK teacher Kaitie Paynich. “Mr. Searing and I were just there to support! They told Mr. Searing and I this morning, so we got the IB medals.”

Even with their caps, gowns, and IB medals at the ready, students were still missing an important item: a diploma. They quickly rallied together to make this detail a reality, too. “When someone jokingly said we should graduate, I decided to help David make it a reality,” said senior Carter Wells. “I used Google slides to whip up a diploma real quick and added several “stylistic” elements to express the emotions we all felt.”

Once all of the material items were in line, all they needed was a master of ceremonies for their mock graduation, and they found one in Searing. “I was a little surprised when some of the IB Diploma seniors came to see me before school and asked if we could have a mock graduation during TOK for the IB Diploma seniors,” he said. “But they were super excited about it. I had jeans on, so I ran home and put on a suit to make it feel more official.” Searing even queued up Pomp and Circumstance on YouTube before the mock-valedictorian took the stage. “David Le (The ceremony’s CEO of Education) gave a short valedictorian speech. It was actually a graduation haiku,” said Searing.

Despite there being just hours since the plan’s conception, Le was ready for his speech. “I just started the graduation with a warm parting speech and then we each walked across the room like it was the stage in the Miller Auditorium,” he explained. “Some students even wore their older siblings’ graduation cap and gown, which was hilarious.”

Each graduate was honored individually in the same way they would have been at graduation. “When each of us went up, we all got a diploma that said ‘COVID-19 Survivor’ and we all got to do elbow bumps with Mr. Searing as we can’t shake hands,” said NHS vice president, senior Isabel Reid. As the commencement came to a close, students enjoyed traditional post-graduation festivities. “When it was done, we took the obligatory graduation pictures. It was a lot of goofiness and a lot of fun!” said Paynich. “I think that this helped lighten the mood of the school cancellation due to the Covid-19 outbreak and it helped everyone stay positive.”

When the final bell rang at 10:50, commencement ended and quarantine started.  The moment had passed, but the memory and purpose behind the graduation never ceased. “Today’s ceremony was bittersweet,” Wells said. “There was a certain element of comedy of course, but behind it was the stark realization that this is now our reality, and that this will be felt for the rest of our lives.”

After the day ended, Reid walked the halls dressed in her brother’s full graduation regalia. “It actually made me feel really confident because even though I was getting a bunch of weird looks, it made me feel really proud of what we were doing,” she explained.  “Someone suggested ‘let’s do fake graduation’ and we all laughed about it, but then it made me proud that we made it happen. That we were going out of our way, to make a special memory and make our bond as IB Diploma candidates even stronger.”

Since its discovery on November 17, 2019, the coronavirus has grown from a local issue to a pandemic that is impacting the United States in every area of life. The feeling is new to the  Class of 2020, but not to Searing. Looking back nearly 19 years, he recalls a similar feeling: “I remember being in my classroom with students on September 11, 2001 and processing the events taking place in the world that were out of our control, and I felt very much that same way today,” he said. “I will be forever grateful for our fun little graduation ceremony in TOK.  It will certainly be a moment in my career as a teacher that I will look back on for many years to come.”

On a day when the only certainty students had was that the school year was on a four-week hiatus, the ceremony provided a welcome dose of normalcy. “This day meant hope that there are better days ahead as a community of Portage Northern and IB Diploma to turn from a bad situation to celebrate something positive,” Thomas Perez said. “ It was such a fun day, and really genuine, especially because this time is really difficult for everyone around the world.”

History is in the making as these students sought a moment of clarity and positivity amidst the threatening circumstance. “This was kinda just our closure, it was really all up in the air. Not knowing what was happening with our education or our High School experience as seniors that was kinda stolen from us,” McGrath said. “This was reclaiming that and making sure we get the experiences we’ve looked forward to our whole high school career.” While the rest of the school, community, state, country, and world stood on the edge of panic, the class of 2020 had hope. “It felt like a great way to bring some normalcy to our seniors, who like lots of other students, find themselves suddenly looking at a very different end to their final year of school than they were expecting or planning,” Searing said. “Now, more than ever, we need to remember to honor our relationships with one another.  I am super proud to be able to share this moment today with them.”