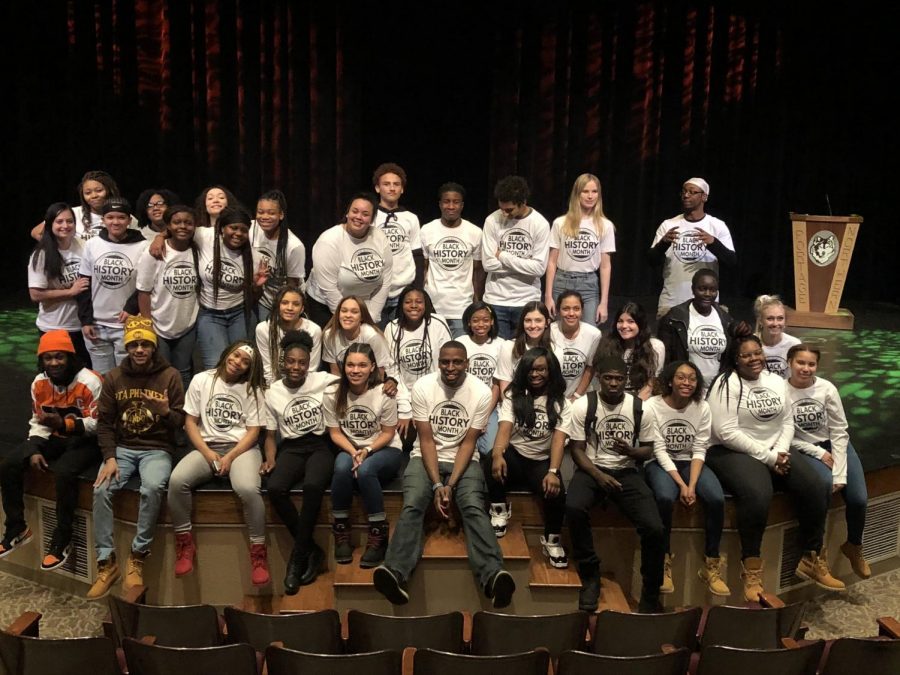 The program, which featured 35 PN students and was directed by Empowered Club leader Dr. Thorpe, took months of preparation. Junior Jamillah Clark goes into detail to explain the process of what it was like to practice for the Assembly: “We had rehearsals Monday, Tuesday and Thursday from 2:50-3:30 all of January up to the show date. For the steppers, we had later practices because it was a little more complex and needed more time and work. So, we practiced from 2:50-6:00 most days we had rehearsal.”

Clark co-led the cast along with juniors Makayla Bolton and Maya Daniels were the student leaders for the assembly. “We started brainstorming ideas way early,” Bolton states. “Jamillah and I came up with the theme one night and Maya drew up a few shirt ideas and we chose one.” Clark added:  “I actually came up with the theme ‘A legacy of strength, a future of hope. It sends how our ancestors have created such a great legacy for us and they can only hope for US to continue it.”

The assembly featured a spoken word piece, a song, a keynote speaker, and the crowd favorite, a step presentation. All elements tied into the theme and served a particular purpose. “What stuck out to me was as we have seniors leaving and freshman entering it’s up to the seniors to mark their legacy here at Northern and hope that the incoming freshman can have a strong future too,” said Clark. “We wanted to choose things to inspire them.”

There were three shows, two for NHS students and one for NMS and WMS students. “I really liked the classroom-inspired spoken word piece,” said Bryan Shaw. Kathy Ha, who advises the DREAMS club at WMS, said, “They [the middle schoolers] felt so honored to witness the energy, passion, talent, and power that emanated from the stage and participants.” Jade Ayers, the mother of cast member sophomore Kennedy Campbell, emailed school administration after the assembly to say, “I so appreciate the Portage Public Schools staff working with and affording all of the students an opportunity to learn about the African American culture and history. I looked around and saw ALL of the kids clapping for, hugging and in support of each other! In these most divisive times, I thought the program invoked hope and a sense of unity among the students.”