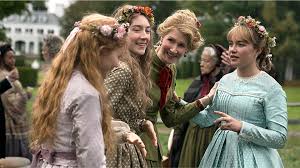 Little Women by Louisa May Alcott has been adapted so many times, there are at least 5 movies of it alone. But this one, directed by Greta Gerwig, puts Jo March at the center of the story, and highlights feminist themes, especially about marriage. Jo (Saoirse Ronan) is extremely relatable and was already my favorite character when I read the book, and I really enjoyed how relatable she was in the movie. The other March sisters: Meg (Emma Watson), Amy (Florence Pugh), and Beth (Eliza Scanlen), beautifully fill out the story of four different women brought together by sisterhood.

However, instead of going in chronological order like the book and following the story of the March sisters as they grow up, the movie starts in the middle of the book and has flashbacks to when the Marches were younger. Although the time skips were sometimes confusing, it was also very interesting to see the parallels between the younger Marches and the older Marches. Also, the movie added a twist to the ending, revealing that Jo never got married in reality, she only wrote it into her book so she could get it published. It never made sense to me that Jo married in the actual book, so I didn’t mind the slightly altered ending, but some die-hard fans of the book may not approve. The costumes and sets were so beautiful as well. As someone who has read the book, it was a heartwarming, emotional movie that was faithful to the book while still providing a fresh perspective. I give it 4.5 out of 5 stars.