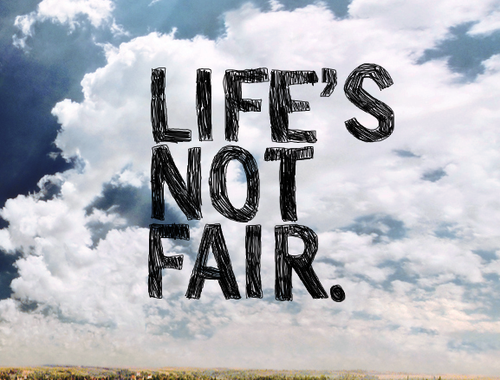 Unfortunately, that’s not true. We want so desperately for life to be fair, but unfortunately it isn’t. People’s lives are unbalanced, and not everything happens for a reason. Some people are really talented at a lot of things, and some people are not. Some people are extremely less privileged than other people, and it doesn’t balance out. There is no balancing factor sometimes. Sometimes people just have terrible lives.

But this is more than just being good at school or sports. Some people live in war-torn or impoverished countries, or are depressed their entire life, and some people are extremely privileged and can do anything they put their mind to. It hurts to admit that life isn’t fair for the people who are overly privileged. Because the people who life hasn’t been fair to already know this fact. It’s hard to grasp the concept that you are extremely lucky, and that your life will be fundamentally better than someone else’s simply because of factors that you cannot control. That there isn’t a balance in life.

This doesn’t mean that there aren’t some good things to balance out the bad, or that bad things that happen never have a hidden reason behind them. The troubles in our lives can help us become better people, and that is something to never forget. However, the hard truth is that life isn’t fair to everyone. Hurricanes strike and wildfires rage. People are successful in life because of their privilege and people fall behind because of the privilege they do not have. So any time that you have the ability to make someone’s life better, or even just their day, do it. Life isn’t fair, but people can be.