On Ice: Hockey team works their way through challenging schedule 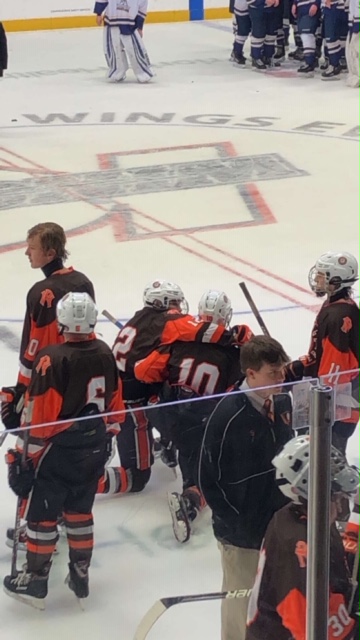 Freezing rinks for the people in attendance, vicious hits, and the sound of the buzzer going off after a goal. Sound familiar? Well, it is indeed hockey season for the Portage Northern Huskies.

The team started off the season with a 4-2 win over Cadillac. After 12 games, the Huskies are 4-7-1. Freshman Nick Jepson commented about the team’s past performances. “Many people didn’t believe in our ability to compete,” he said. “We have so much skill on this team and many playmakers along with smart hockey minds that make our team very solid. All around there are many strengths about our team however there are definitely areas that need improvement.”

On Monday, December 9th, the Huskies took on their arch rivals, Portage Central, in the widely-known Portage Rotary Classic.The Huskies fell short of the Mustangs and were defeated 9-5. Regardless of the loss, Freshman Bram Sundman’s mentality for the team is, “a winning season.” Senior Daniel Wester added, “Our biggest strength is our ability to work together as a team and always have each others backs. Our weakness is not really that big we just have young players that we are developing and maintaining consistency is a challenge as well.”

Despite the Huskies losing record, it is evident that the players believe they have the capability of being great. See them in action next as they take on the Capital City Caps at home this Thursday, January 9th.