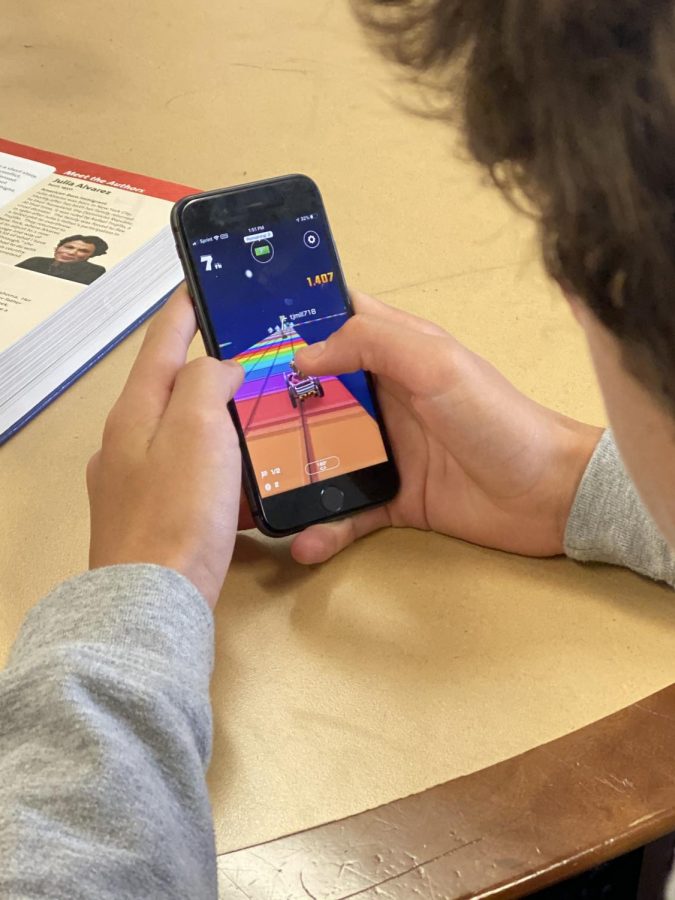 Mario Kart appeals to a wide variety of students. "For me, it brings back old memories," says sophomore Brayden Andrews. "I used to play on the Wii." Photo by NL Staff.

3, 2, 1, GO! Nostalgia has been filling the students of Portage Northern for the past few weeks as the release of Nintendo’s Mario Kart Tour has been released and has quickly become one of the top mobile games at the moment. Most of the students in Generation Z (born 1995-2015) grew up playing the original game on either their Nintendo DS or Wii systems. “I did play the game on my DS,” says senior Jonah Pilnick, “I love playing it now because it brings back so many memories.

The new game has many of the same features as the original. All of the original characters remain the same, and the most iconic races, like ‘Koopa Troopa Beach’ and ‘Rainbow Road’ all are available on the new version of the game. “I think that Nintendo did a great job recreating the game for the phone,” says Pilnick, “The graphics are amazing and the courses look exactly the same as they do currently on the Nintendo Switch.”

However, one noticeable difference is that it is not often that players ‘die’ or fall off the course. Even in Rainbow Road and Bowser’s Castle, some of the harder levels in the originals, there is an invisible barrier that prevents the driver from falling off of the path. This makes it much easier to drive more recklessly and get ahead of drivers. Freshman Ashika Gullapalli says, “It’s a good game, but it’s a bit too easy considering you can’t fall off the roads and that used to be a big part of the fun and challenge of it.”

Another difference is the absence of the classic Koopa who rides in a smiling cloud vehicle and appears at the start of every race and lap as well as each time a player falls off the course and must be rescued. However, the character, Lakitu, has its own cup in the Tokyo Tour and it is a character that can be unlocked using the ‘pipe’.

In order to unlock new drivers, karts, and gliders, players must use the pipe which will randomly shoot them out. To be able to use the pipe, the player must collect rubies which are awarded when daily challenges are completed, and when high rankings are awarded in the weekly rank board and many other occasions.

As for the controls, there are a couple choices based on preference. You can choose to use a manual drift setting which will cause the kart to drift when the screen is touched. Drivers can also opt to turn on a smart steering setting which will add steering assistance, and an auto-item which will automatically use the items unlocked when a new box is broken. The last add on setting is a gyro handling setting which will allow you to play by tilting your device, similar to the Wii version of the game. If you choose not to activate any of these steering controls, the game will have the default which just turns the kart to left and right when the screen is touched. Nevertheless, no matter which setting one chooses, it takes some time to get accustomed to this new way of playing Mario Kart. “I struggled a lot when I first played it, the whole dragging my finger to move the car wasn’t really easy for me. When I saw there was a tilt option I tried it and it’s the best,” says senior Ana Luisa Decarto Pinto.

The way the game is set up, there is a tour that lasts for two weeks, and players must try to finish each cup and earn as many stars as possible before the two weeks are up. After the tour ends, the game will self update and a new tour will be available to play. Currently the Tokyo Tour is live and opened on October 9th of 2019.

Over all, the game has met most player’s expectations and in some aspects, even exceeded. Nintendo really outdid themselves with this game with a 4.8 star rating on the Apple App Store and a record breaking 20 million day one downloads, surpassing not only Pokémon GO, but all mobile games.