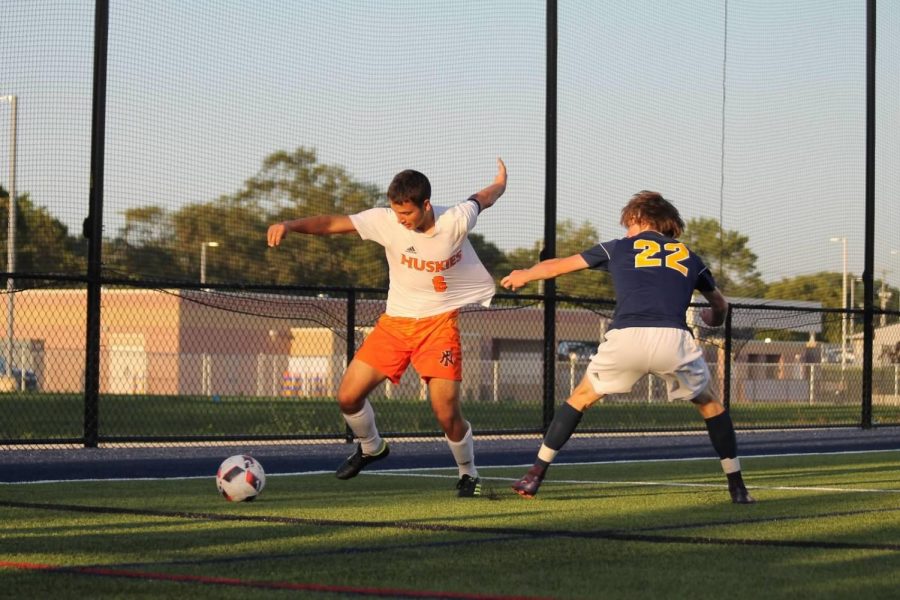 Senior Jonah Pilnick drives past a Portage Central defender during their 2-1 loss in the regular season. The rivals are set to face off in a rematch in the second round of the District tournament. The Huskies have already taken revenge on Kalamazoo Central and Lakeshore this postseason following regular season losses, and will look to do the same to PC. "We hit a little bit of a low in the middle of the season, but we are now playing the way that Huskies should play," said Pilnick. Photo courtesy of Katie Kean Steil.

With a 3-1 victory over Kalamazoo Central and a 5-0 victory over Lakeshore, the Huskies capture a silver division championship in the SMAC conference. District tournament play begins Thursday the 10th, with a rematch against Jackson, the team that eliminated them last year.

During the regular season, the Huskies finished with a 5-5 record in conference, good for a 7th place finish. Just one more victory would have elevated them to 3rd place and given them an opportunity to compete in the gold division tournament.

This season has not always went as the Huskies hoped. “The worst moment of the season was losing to Kalamazoo Central 1-2.” said senior Christian Shaman. “It was the game that decided if we could play in the SMAC gold division tournament.” Following this game, however, the Huskies came back from a 0-2 deficit to defeat Lakeview 3-2, sparking a winning steak that the Huskies will ride into the District tournament.

The Huskie team has been able to turn the season around largely due to a shift in mentality and team chemistry. “At first many of us played for ourselves,” said Shaman. “But as the season progressed we all began to play for each other and that is why we were successful in the end.”

Senior Jonah Pilnick agrees. “Throughout the season, the team has become more of a family,” he said. “There is a lot more positivity on the field.” Because of these changes, the Huskies are now optimistic about their chances in the tournament. “I believe our team could beat anyone together,” said sophomore Jack Brown. “We keep the same mindset of family and winning at all times.”

The district tournament begins for the Huskies at home on Thursday October 10th against Jackson, and, if they move on, they will be set for a rematch against rival Portage Central on Wednesday October 16th at Mustang Field.