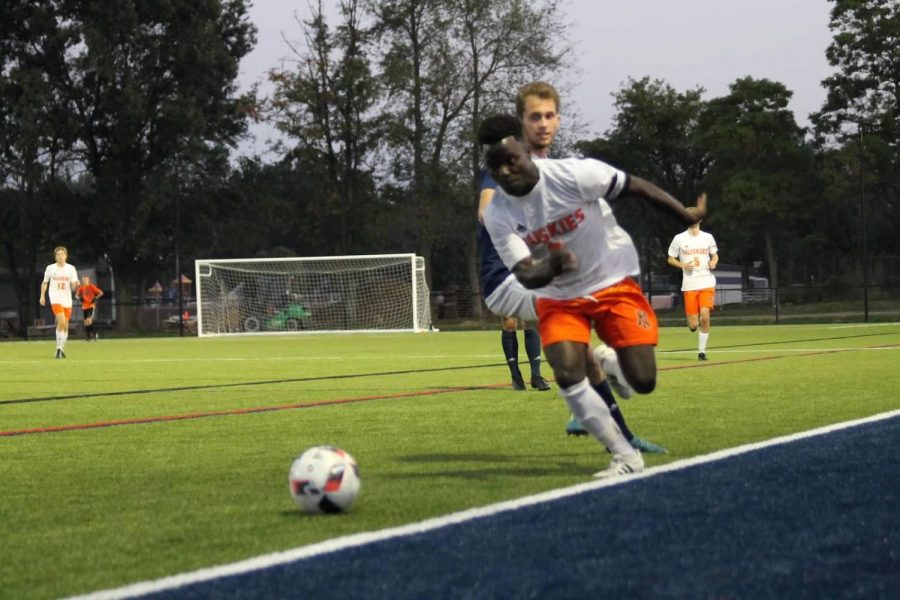 Senior Levi Crooks goes past a PC defender and down the sideline. Despite a Crooks goal, the Huskies fell 2-1 in a tight game. The two teams are lined up to face each other in a rematch in the second round of the district tournament if the Huskies beat Jackson, the team that elongated them last year. Photo courtesy of Katie Kean Steil.

The varsity soccer team lost a close game to PC during their regular-season match up on September 17. Senior Levi Crooks scored Northern’s only goal with five minutes left in the game, but the Mustangs scored twice,  and the final score was Mustangs 2, Huskies 1.

Crooks almost scored another time, but was unable to due to the rough and highly physical gameplay that had characterized both the JV and Varsity games.

The Huskies started off with a lot of passes, slowly breaking through Central’s defense. Crooks almost got a goal at that point, but the referee called a foul on a Huskie player for pushing a Central player. The referee gave Central a free kick, and they got their first goal of the game. The Northern SuperFans, out in full force, booed loudly.

At half-time, the Huskies discussed their strategy for the second half. They played more on the offensive during the second half and almost scored a few goals. The Central players repeatedly targeted Crooks, a key player, and eventually Central passed the ball by hitting it with their heads, and it sailed past the Northern goalie, giving them another goal. A few minutes later, Crooks scored the Huskies’ only goal. The Northern fans cheered triumphantly, and while the game ended with a loss for Northern, but the fans still supported the team.