Portage Northern baseball wins districts, rolls on through the regional and on to the state final four 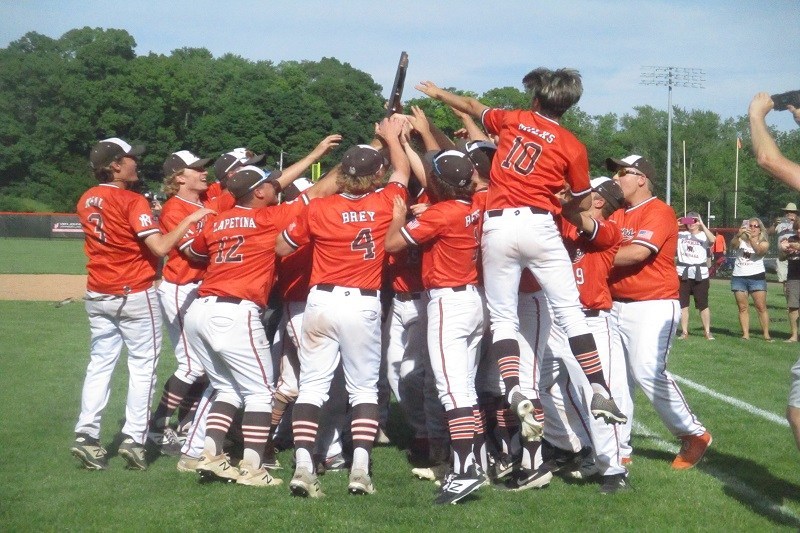 **All interviews courtesy of Tom Sielatycki. Watch the full interviews and video highlights of each game here: https://www.youtube.com/channel/UCPSGlGxJO565i92iMZYmDqQ/videos **

With an early 4-2 lead in the 2nd inning of their first district game, a crash of lighting and the following two and a half hour long rain delay threatened to capture the Huskies’ momentum.

Last season, the Huskies came together to win their first elimination game after a substantial rain delay helped shift the momentum. After being down to their last strike, they ended up winning 10-7.

This year, the Huskies didn’t face any similar elimination scare, dominating 15-0, 11-2, and 9-1 in three district games against Loy Norrix, St. Joe, and Mattawan.

“We just kinda cruised the whole game,” said Senior Cam French, who started the first game and pitched four scoreless innings after the delay. “We were playing how we normally do.”

French’s flawless pitching effort following the delay is not an easy task. “That’s super hard, because you have to get mentally and physically ready again after warming up the first time,” explained Junior catcher Gannon Andrews. This tough, gritty mentality represents the attitude and culture of the entire team. “These guys are fighters,” Andrews said. “They compete every single pitch. Guys that aren’t playing are up on the fence screaming, guys that are playing are playing their hearts out and everyone’s fully bought in and wanting to win.”

The Huskies have done just that this season, and seem to have hit their groove at the right time. They are 33-7-1, and are ranked 2nd in the Division 1 MHSAA coaches poll. Now, their sights are set on regionals.

From the beginning of the season, the Huskies have had an eye on playoff success. “We’re on our way to our vision,” Coach Chris Andrews told the team before being doused in Gatorade. “We’re together longer, and that’s the goal. To be together as long as we can. We love each other so much.”

This love and togetherness has been integral to the team’s identity this season.

“I love them with all my heart,” said Sophomore Xander Morris after pitching a complete game in the district finals. “I thank God every day to be with them and just to be able to be with them another day, I just love it.”

After the Huskies’ thrilling district win, they strung together tough, extra-innings wins against tough Grand Ledge and Woodhaven teams to advance to the state final four. The Huskies took the Grand Ledge game to 9 innings and a final 5-4 score, with Nolan McCarthy’s walk-off single bringing in teammate Jack Befell. They played Woodhaven, who defeated Saline, just hours later, besting them by a score of 7-3.

They play Birmingham Brother Rice at 11:30 am on Thursday at Michigan State University. They other two teams remaining are Rockford and Macomb Dakota.