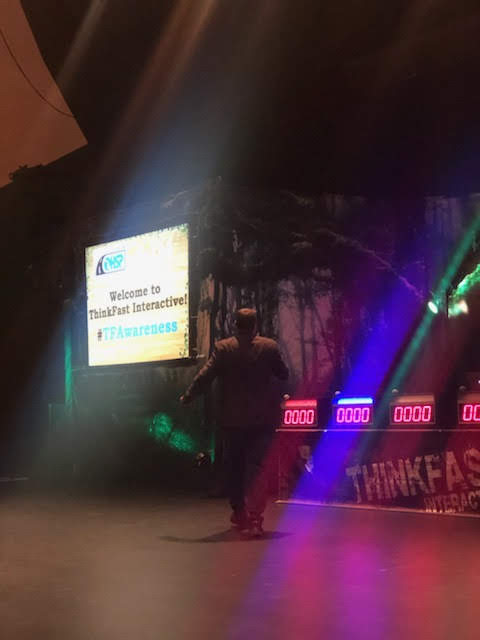 Speaker Will Krahn welcomes students to the presentation.

During the presentation, participants form groups and answer survey questions using a remote. The assembly had three different parts: a dance competition, a series of survey questions and a role play scenario. “It was fun, interesting and interactive,” said junior Maddie Blubaugh. “[It wasn’t] like the normal boring ones.”

“I thought it was a fun way to get involved with students and put a message out there but I think the seriousness was taken away,” said senior Marisa Toomsen. “I’m glad we’re spreading the message but I feel like the seriousness wasn’t there and it won’t stick in people’s minds”.

The survey included questions such as:

“How much is a ticket for not wearing a seatbelt?”

“What is the main cause of driving distractions among teens?”

and other questions on pop culture. In a role-play situation, two students were also chosen to convince the speaker, Will Krahn, not to drive under the influence.

The winners of the dance competition and the role-play scenario, junior Amira Branson and senior Dale O’Leary  respectively, were both chosen by the audience and the top two group leaders of the survey rounds (seniors Chase Emmons and Noah Morrison)  all c

ompeted in the final Jeopardy-style round. Each participant completed for a chance to win $100 in Amazon gift cards to share with their group. After answering recap questions from the presentation and other questions, Morrison won the round with 500 points.

“The number one cause of death [in people 15-29] and we want to change that,” Krahn commented. However, he believes that knowing the dangerous of distracted driving is crucial to all drivers, not just teenagers. “We were on the Ohio Turnpike yesterday and for about five minutes, we watched a semi [swerving] back and forth because he was sitting on his phone texting,”  he said.