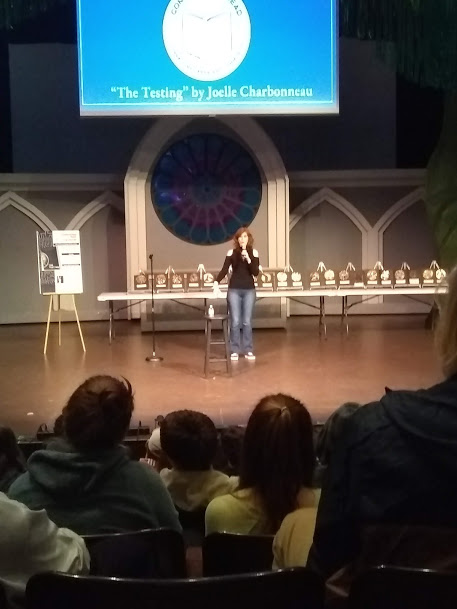 Every year, a young adult book is chosen to be read throughout the Portage community, especially by teens. This year, that book is The Testing by Joelle Charbonneau. Throughout March, there were events to celebrate and recognize the dystopian novel.

On March 1, the work of PN’s Design II students was showcased at This is a Bookstore. Each student carefully chose symbols to represent different parts of themselves, just like the symbols of each group in The Testing. “I used two koi fish swimming in water for my symbols. The koi fish represent determination and the rippling water was meant to represent the ups and downs of life.” sophomore Miette Smith describes.

“My piece was inspired through the style of the symbol, and the dystopian air of the book is what inspired the less natural features, like 7 eyes and a giant triangle.” Senior Leigh Everett says.“I attended the art hop because I was excited to have my art displayed for the first time.”

The Design II students used a technique of engraving copper called repousse. “Repousse is an art technique that utilizes engraving tools to make indents and texture on a thin sheet of metal, often copper” explains sophomore Paige Underwood. “The resulting design comes from the difference in dimension on the metal.” Photo credit: Sarah Nott

On March 6, the Portage District Library hosted an escape room inspired by The Testing. “We had a delightful mix of 30 teens and adults (mostly teens) divided up into 6 teams.” says PDL librarian Katharyn Jones. “We had four rooms based on scenes from the book: Traditional testing with outside-the-box thinking twist, plant identification with deadly consequences, shipping container entrapment in a radioactive wasteland, and a race out of the ruined city to the finish line.”

All of these are real scenes from the novel. “I do think the escape room captured the idea of The Testing,” says Portage Central librarian Sara Brown, who was able to participate in one of the escape teams. “I think everyone enjoyed the experience and the testing mysteries.”

“The Escape Room went well and was a great success in our book.” Jones concludes.

“Within a few minutes our team was accepted to begin and we were led back to a table to choose 3 pieces of survival gear.” says librarian Sara Brown. Photo credit: Sara Brown.

“The second room was dark with various plants on tables and taped to the walls.” recounts Brown. “We used a black light to find out that in invisible ink the names of the plants were written next to each. Using the names and more reference books we were able to determine which plants were edible and thus passed the second test.” Photo credit: Sara Brown

On March 20 and 21, author Joelle Charbonneau held assemblies at Central and Northern. In her presentations, Charbonneau talks a lot about her experiences with rejection, both in her acting/singing career and her writing career. She brought these life experiences with failure into her novel, The Testing. “The only test that matters is when they tell you no, you get back up and you try again,” says Charbonneau, noting how The Testing is her commentary on standardized tests, which she believes couldn’t have been told in any other format than YA.

“Adult genre books try to skirt politics or a lot of modern issues… because adult readers don’t want their preconceived notions of the world challenged,” Charbonneau explains. “People who read young adult books are people who are willing to look at the world and ask what you really believe about it. You’re actually willing to ask questions. And be willing to look at it as what it is instead of what you want it to be.”

Charbonneau also has a lot to say about the Communiteen read. “I love community reads… because you bring your own life experiences to a book,” she says. “I wrote the words, but you bring them to life. And I feel like we get to know each other so much better based on what we find important in a book. Community reads are a way of people learning about each other through a shared experience, and we don’t do enough of that.”

PDL librarian Kathryn Jones agrees. “The CommuniTeen Read is unique because it is a program that welcomes interactions among teens and adults. Everyone is encouraged to read the same book and talk about how it impacts them. In a world that can sometimes seem divisive, it is incredible to discover how similar we are over the pages of a good book.”

Coming out September 24 is Charbonneau’s new book, Verify. “It’s a near future where the government has taken words out of our language and with them the ideas behind them,” explains Charbonneau. “There is a renegade group of people who has been taking the books and hiding them… and are trying to find a way to restore truth to a world that thinks they already know what the truth is.”