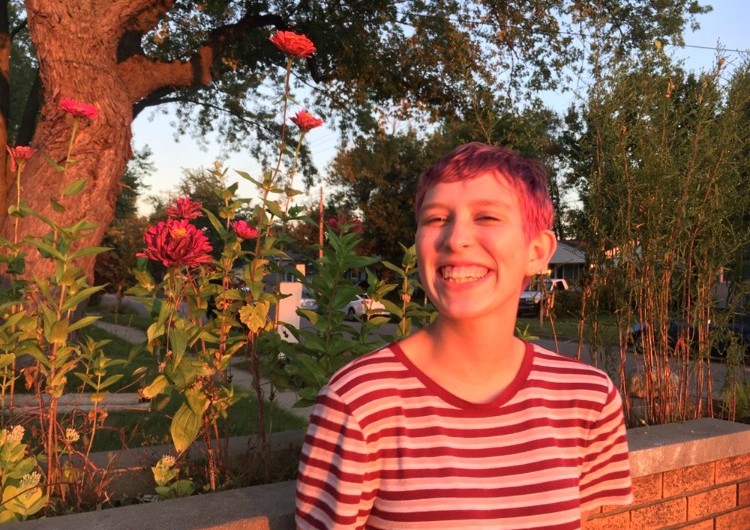 “Yes,” she said and kissed me. The heat rushed to my cheeks, as I realized what just happened. A goofy smile probably crossed my face as I went on to grab her hand. In that perfect moment, it never crossed my cross my mind that I would have to come out to my parents.

I was terrified to tell them because I always believed that they were homophobic and against the LGBT community altogether. I had heard them make very insulting comments about people they had seen on tv or on the streets that were part of the community, and I also thought that they were very judgmental in general, really about anyone and anything. For years I’d struggled with their judgement on all kinds of topics aside from my sexuality, and I didn’t know if I was ready to add this fuel to the fire.

I knew that it wasn’t going to be easy, but I was unprepared for how difficult it would actually be. When I told my dad and my step-mom, I was crying hysterically. Sitting on their bed being my most vulnerable self, I felt so small, like they were towering over me in judgement. I imagined every word I said being received with accusation and defense. I tried my best to explain to them that I had a girlfriend, and that I was bisexual, but that I was still me.

They weren’t hostile, but I didn’t feel completely supported. Coming out to my mom was a whole other story:  it was pretty much the opposite of my experience with my dad and stepmom. I told her second, not because I was scared or anything, but because that was just how it turned out. I made time Monday night after school to talk to her, and she didn’t know what it was about. I was a bit nervous at first, because I’m not a very open person in general, but I knew she would understand, so I came out and said it. She immediately made it known to me that it was okay, and she still loved me just the same. We talked about how it went when I came out to my dad and stepmom previously, and she showed a lot of sympathy for how I felt and support for my situation.

I was glad to have that behind me, because I had been traveling along the road to finding my true self for a long time. In elementary school, I started to develop feelings for my best friend. I didn’t realize there was a name for what I was feeling, and I figured it was a normal thing to feel for a best friend. Later I found out about the LGBTQ+ community and started to see that I fit into it.

Through part of middle school, I identified as bisexual.  I was mostly very open about it, and wouldn’t shy away from talking about it.  I wanted people to see what it meant, because I would get questions and comments about it a lot. Some were out of confusion or  ignorance, but others were just plain rude and insulting. Some of them impacted me so much that I still carry them with me today:

“You can’t be bi, you have a boyfriend”

These comments and others like them were very hurtful, even when the people behind them didn’t mean to be and they didn’t realize that what they were saying was rude.  I was left speechless, angry, or embarrassed by my classmates’ remarks, feeling like a private part of me was being violated by careless, uneducated talk.

Having this understanding fulfilled me. I didn’t feel like I needed to tell anyone or come out to my parents and close friends in this new way; I felt settled, and like after all these years, it wasn’t really anyone else’s business. I didn’t keep it to myself because I was scared, but because I had gained a new respect for myself and also for my privacy. Eventually people found out because I posted on my Snapchat story about it on National Coming Out Day, but that was less for me and more for others: I have found my truth, and I hope that my story can inspire others to find theirs, too.

I’ve learned to distance myself from hate and teach people who are uneducated what sexuality and gender is all about, because they are commonly misunderstood. I will continue to advocate for all people who identify with the LGBTQ+ community everyday of my life, because I believe that the whole world deserves to be accepted and respected for their sexuality and gender. A person’s gender and sexuality is not something that they choose to be over time, it is who they are born to be all along, our society just makes that path more difficult for some people than for others.