A Semester of Sticky Note Secrets 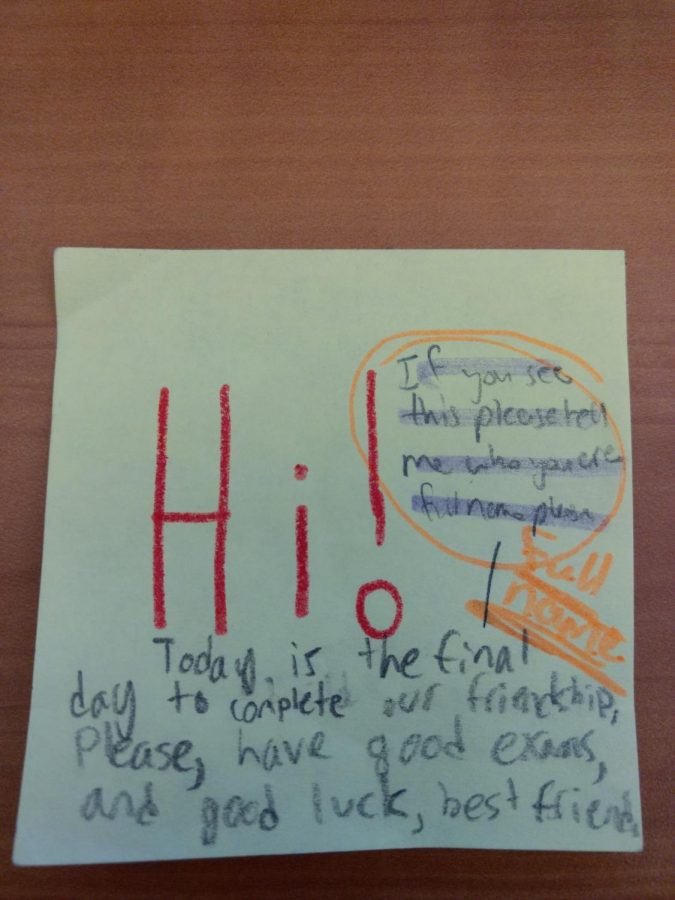 The various messages sent over a semester

During first semester Melissah Morris-Adkins and I found four sticky notes stuck together under the computer tower at my desk in the third floor lab. At first, we thought it was left there by accident. A few days later, we realized it was still there, so we decided to write on them to see what happens. What we didn’t know was that this would spark a semester-long, mystery friendship.

To our surprise we looked at it the next day and someone had written back. “When we first found the sticky notes and started writing on them I didn’t think anyone would reply to them after we wrote back on them. And when they did I was quite shocked that they did reply,” says Morris-Adkins. We were excited that someone had wrote back to us, so we decided to keep writing back to this person. This continued for the rest of the semester, with supportive and inquisitive messages being sent back and forth via these sticky notes.

As the semester was nearing the end, we realized we still had no idea who the mystery person was and they had no idea who we were, even though we had become a fun part of each other’s day.  “About mid way through the semester it almost became a habit to look and see if they wrote back on the sticky note because I was always looking forward to get a new hint to as who this person was,” says Morris-Adkins.

The next day they asked us who we were and what our initials were. Of course we told them our initials, and we asked what theirs was but they did not tell us. Again the next day we asked if they could tell us who they were. They still did not reply and there were only two more days in first semester left.

On the last day of the semester they wrote “Today is the final day to complete our friendship, please, have good exams, and good luck, best friend.”

“I was really sad when we had to say goodbye to writing on the sticky notes to them because I was always looking forward to seeing if they replied to it. I still would really like to know who the person is. And hopefully become friends with them,” says Morris-Adkins.

We still have no idea who the mystery person is, but we are still looking. Hopefully one day we will figure out who became our best friend through 4 sticky notes