An inside look at Winterfest 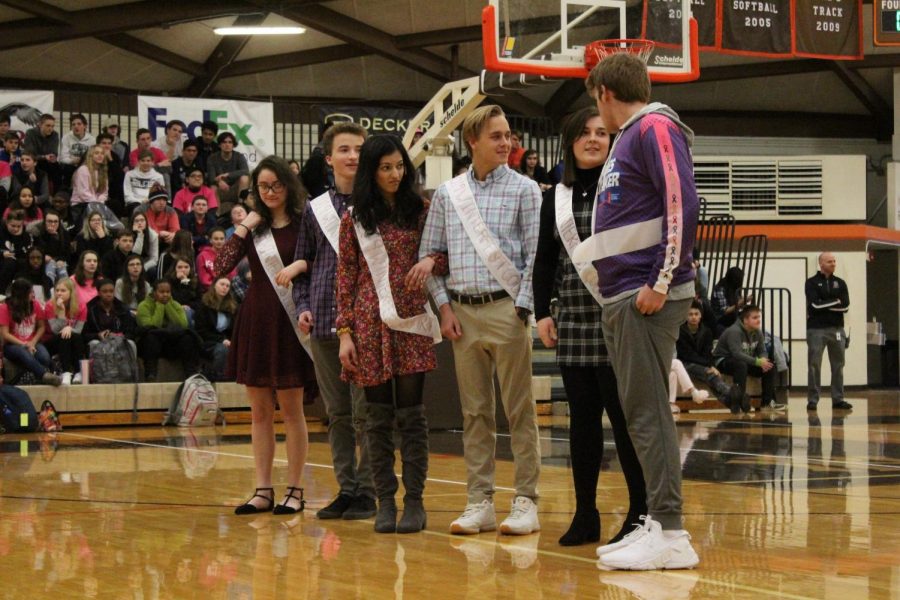 Homecoming court bows as the crowd cheers for them at the pep assembly.

The week of January 28, students and staff alike participated in dress-up days, a pep assembly, and a dance as part of Winterfest. Winterfest was made possible by the work of the Student Senate. In order to make things runs smoothly, there were 4 committees: the Spirit committee, the Pep Assembly committee, the Houston Award committee, and the Court committee.

The Spirit committee was in charge of making flyers and banners for the winterfest week, including the dress-up days, and they also planned the dance. “This part of Winterfest is important because school spirit is the pillar in which all other Winterfest activities are built on,” says leader Jason Fargo.

As for the dance, it seemed to be a success, despite not as many people coming as in previous dances like Homecoming.. “It was so fun because there wasn’t as many people there,” says Charlotte Wilson. However, some decided to stay home. “I wanted to have a quiet night instead of going to a big dance. A lot of the dances are really overwhelming and school can be really stressful,” explains Samantha Killmer.

During the week, students were able to vote for their favorite seniors to become Winterfest Queen and King. What made this possible was the Court committee. “We’re responsible for the court ceremony and making sure everything is put together for that,” leader Gracie McGrath says. The committee ordered the arch, tuxedos, flowers, and sashes, in order for everything to be ready on Friday for the pep assembly. McGrath says, “[Winterfest court] is special just to seniors to allow them to look back on that last four years with pride.”

Another key part of Winterfest is the Houston award. “For the past four years at PN, we have handed out this prestigious award in order to commemorate the adversity and challenges one of our senior classmates have faced,” says leader Sarah Headapohl. The committee sends out a form to teachers to nominate seniors for the award, and sends each nominated senior an application form. After that, Student Senate members read all the applications to narrow it down to a final list of nominees. Finally, after the winner is determined, the woodshop class works to make a detailed plaque. “While this may be a long process, it allows us to give the award to the very most deserving person and show them that they are always supported by their PN family,” Headapohl says. The winner, Dorah Stephen, was announced at the assembly.

Finally, there was the pep assembly on Friday. The pep assembly committee planned, managed, and set up everything for the pep assembly. “Pep assemblies are important to boost school spirit,” says leader Meghan Chow. “It helps students get excited about their school and it also gives students a break from academics.” The assembly included the band, basketball tournament, Houston Award, and court celebrations.

In the end, Winterfest is devoted to seniors. “We really try to stress how important each of our classmates are and this week takes time to honor our senior class!” Headapohl says. “While our seniors look to begin a start of a new chapter of their lives, they know wherever they end up, we were lucky they were a PN huskie!” Fargo agrees. “Winterfest is special because it’s centered around seniors.”

However, it’s important to appreciate that Winterfest would not be possible without Student Senate.  “Winterfest is made special by the hard work that every senator does to make it happen. So much happens behind the scenes that not all students know, and it’s really important to recognize the students that make it happen.” McGrath says.