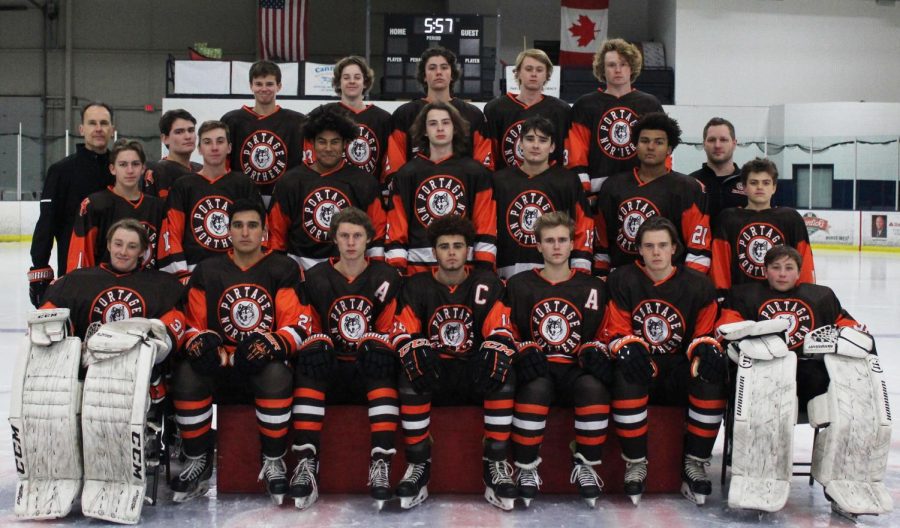 The Portage Northern hockey team is looking to take some late season momentum into the MHSAA tournament. The Huskies are 10-15 so far this season and coming off two wins against Kalamazoo United.

In the first 7-1 victory over the KU squad, senior Connor Sorge, who leads the team with 9 goals, scored twice. Sorge’s 9 goals place him third in total goals scored in the Southwest Michigan High School Hockey League (SWMHSHL). In the second victory, the Huskies defeated Kalamazoo United 5-2 following a tough 2-3 loss to the Southwest Michigan Blades.

In the loss to the blades, the Huskies struggled with penalties. This is an ongoing theme for the season. “Our greatest challenge this year was our penalty problem,” said Junior Gable Sundman. “Penalties were a total momentum killer.” Looking at the stat sheet, it may seem like penalties don’t hurt the Huskies as much as Sundman says: overall, the team doesn’t allow many power play goals. However, power play goals are not the only bad part about penalties. During a power play, an offensive momentum the team has is lost and it seems to take the energy out of a competitive game. The Huskies lead their league in penalty minutes, with a total of 224.

The Huskies continue the league tournament on the 27th against Forest Hills Eastern, who are 15-7-3, and the team is taking it extremely seriously. “I expect that we will give it our all like it’s our last game because against a team like that if we don’t it could mean our season ends,” said junior Alex Walker.