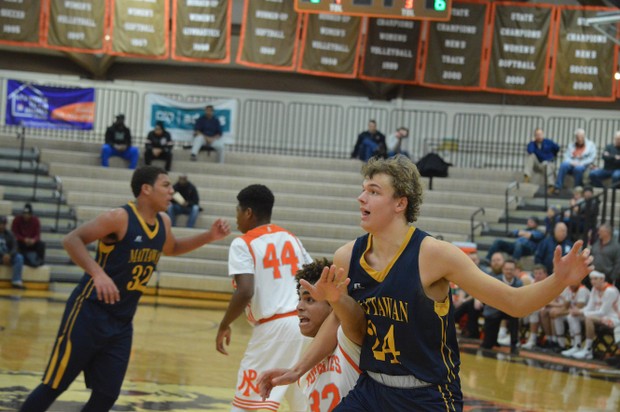 Senior Tori Jackson fights to keep the ball away from a Mattawan post player. Photo by Patrick Nothaft.

After an up and down 11-11 season, the Huskie basketball team fell 50-36 to an undefeated Matawan team last Wednesday. This was the last PN basketball game for seniors Cameron French, Tori Jackson, and Devin Marshall, who have played a combined 9 years of varsity basketball at Portage Northern.

In addition to the 3 seniors, the team was made up of 10 juniors and 2 sophomores who were pulled up to varsity during the season: Tre Tyus, who started in the final game against Mattawan and led the team in points, and Myles Johnson.

The Huskies came out strong against the tenth ranked team in the state, securing a 14-9 lead after the first quarter. However, the undersized Huskies struggled to out rebound the 6’10” and 6’5” duo of senior Wildcat centers, both of whom were taller than any player on the Huskie roster. Following a difficult start to the second half, Northern pulled the score within 7 before eventually losing by 14.

Despite the early playoff loss, head coach Ben Neal still considers the season an absolute success. “When it’s all said and done I think all our guys became better basketball players, became better teammates, and understood what it’s like to be part of something bigger than themselves,” he said. He also hopes that the gritty play down the stretch along with the individual improvement will carry over into a great season next year. “We got a lot of kids coming back, so we should have a lot of senior leadership and that’s gonna take us a long way. We look to be great next year, winning a ton of games and seeing how far we can go in the district and the state tournament.”