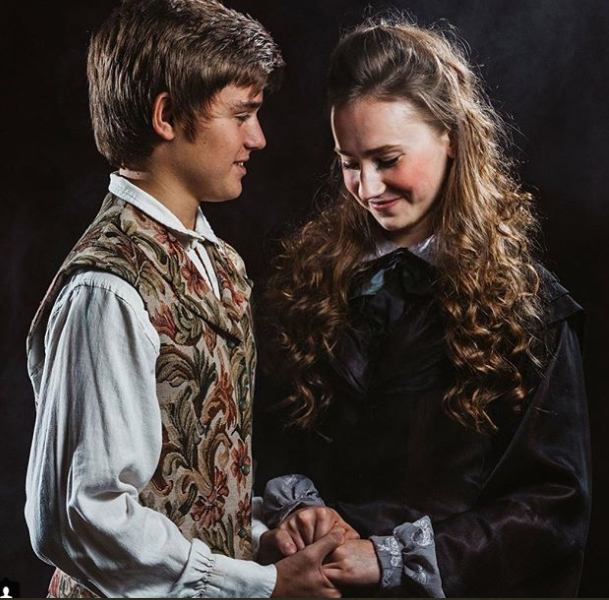 Coryell poses as Cosette from Les Miserables along with her castmate Jason Koch, who plays Marius. “The show has just been so amazing to work on because all of the different people that are in the show with me are just so talented,” says Coryell. Photo credit: Brian Wolfe.

Senior Rosie Coryell waits in the break room in between Les Mis rehearsals, studying her music. But it’s not for Les Miserables, or orchestra, or her IB Music class. It’s for her 12 college applications to major in musical theater. Music is a huge part of Coryell’s life.

“It’s very close to my heart. Music is just something that…  it connects to me a lot and can help me through really any situation.” Coryell says. “So if I’m, like, feeling sad, there’s plenty of songs for me to listen to help me get through that, or if I’m in a really good mood, then there’s plenty of songs that I can connect to there.”

A history of music

Coryell has been interested in music for as long as she can remember. “I’ve been singing… basically since I could talk,” she says. “The first way I learned to sing was by listening to my family singing at Thanksgiving and caroling. I first learned to sing just by like starting to sing along with them.”

Music has always been a big part of her family, and that tradition still continues today. “A couple times a year we’ll all get together, even my siblings who have moved away at this point… and my mom will play guitar and then we’ll all sing together.”

“Our lives have always been filled with music because we are a really musical family,” Coryell’s sister, sophomore Liza Coryell agrees. “For as long as I can remember, [Rosie] has done the school musicals if she has time.”

Coryell’s first time being in a musical was in 4th grade at Amberly Elementary, she played Wendy in a version of Peter Pan. Since then, she has gone on to play Cinderella in Into the Woods, Mrs. Potts in Beauty and the Beast Jr., and Janet Van de Graaff in The Drowsy Chaperone, at Northern and also the Kalamazoo Civic. “When I’m not doing a show here, I’m normally doing a show down [at the Civic]”.

Her most recent role was playing Cosette in PN’s production of Les Miserables. “My favorite musical that I’ve been in is probably Les Mis, because Cosette is kind of a dream role for me… vocally it’s very fun to sing because she gets all the high notes,” Coryell shares.

“The show has just been so amazing to work on because all of the different people that are in the show with me are just so talented, and it’s just amazing to get to work with [them]. All of the professionals that we have hired in for the pit and working on crew are just so talented, and it’s such a unique experience that a high school has all the opportunities that we have.”

Coryell plans to continue her passion for musical theater at the college level.  “Along with preparing for her role as Cosette in Les Mis, she has been fine-tuning and perfecting pre-screens, applications, and audition materials for upcoming college auditions. Along with IB classes, that itself is an achievement”, her castmate Anna Rabe explains.

Coryell has applied to 12 schools. “It sounds like a lot, but musical theater is very very competitive, so out of those twelve, i’ll be lucky if I can get into one or two”, Coryell says. She also explains how applying to major in musical theater is different from the typical college application process. “Most people, they just apply to their schools, apply to scholarships, they get into their two or three. But for me, I apply to my twelve, and then for a lot of those I sent in then recorded videos of me performing monologues, singing, dancing,”

Then, Coryell explains, if she passes the requirements, she goes in to campus for an audition any time from November to March. After that, if the school likes her audition, then she gets an acceptance letter.

Coryell is preparing for a whopping nine auditions at different schools. “It’s super exciting, ‘cause there was a brief period in time where I thought I wanted to go into musical theater and then I was like ‘Oh no, that’s way too risky, there’s no way I’m going to be able to make it’”, she admits. “It’s just so rare for people to make it.”

However, Coryell’s love for theater overcame her doubts. “At one point I went to see a Broadway touring show of An American in Paris and started crying within the first two minutes of the show, and really realized that I can’t do anything else, like I’m gonna beat myself up forever if I don’t give this a try, so ever since then I’ve been dead set.”

People will always ask Coryell what her backup plan is, but she is determined to focus on the present. “Realistically, I know that there’s the potential that I won’t make it, but unless I give my 100 percent all, like right now, then I’m going to hurt myself later and hinder myself later, because if I’m counting on not being able to make it and I have a backup, then I’m really not giving my all in my performances and auditions and stuff.” Coryell explains. “I just have to put the blinders on and go for it.”

“People get to Broadway in all sorts of ways, some people go to college, some people know someone who knows someone who knows the director, and they get pulled out of high school and they go to Broadway, some people it takes until their forties and then they start getting mom roles on Broadway. So it’s a huge inspiration for me to realise that even if I don’t make it on my first try, there’s gonna be hundreds of auditions after that, and that in the end if I’m making a living doing what I love, that’s all I can ask for.”

Coryell has learned that lesson from her role model Laura Osnes, who played the original Cinderella in Rodgers and Hammerstein’s Cinderella on Broadway, Bonnie in Bonnie and Clyde, and Sandy in the 2007 Grease revival.

“She’s so good… her voice is so beautiful. I think one of the best compliments I’ve ever received is someone telling me that my voice sounded like Laura Osnes, I almost cried,” says Coryell. “Her journey has inspired me because the thing that she broke out onto Broadway with was the Grease revival, and they had a competition to be the Sandy, and she ended up winning.”

Anna Rabe sums up Coryell’s personality. “She can walk onstage in the show and blast out the most beautiful and clear B-flat with ease. She really is an awesome performer, and it has been amazing watching her excel in both PN’s theater department and at the Kalamazoo Civic over the years. She’s also undeniably sweet and hardworking.”

Coryell agrees that balancing the musical and her college applications is hard work. “It definitely takes commitment and sort of the motivation to say ‘Okay, on this day, I’m going to work for two hours on my monologues and songs, and then in two days I’m gonna come back and run them again. And, yeah, some nights were late, but… it was worth it”, she says with a smile. Coryell is determined to set aside her doubts and continue to do what she loves into college and beyond.