Friendship: the story of an eighth grader’s journey 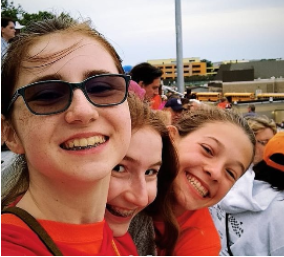 Even by the first game at PN, I had already made new friends that helped me feel happy instead of miserable. Photo by Astrid Code.

“I just don’t want to be friends anymore.”

I tried to act normal as the words from my best friend came crashing down; I tried to seem like it was all okay when it wasn’t. Tried to keep on a mask of composure in my French classroom.

I tried to say reassuring things, all the while waiting for the escape of the bell. “I understand,” I said softly, even though I didn’t. “I’m sorry,” I whispered, even though it wasn’t my fault.

“I’ll share a Google Doc with you,” she said, and I breathed a sigh of relief because that was easier than talking. A notification popped up on my Chromebook, and I clicked on it eagerly. She had already started typing, and I could not take my eyes away from her cursor. The flurry of letters began to form words that told an inconceivable story: that she had made a plan to detach me from my entire group of friends, making them all ignore me, just so that I wouldn’t want to be friends with her specifically anymore. I stared at it in disbelief before finally typing the only thought that I could coherently form:

I looked around the classroom at the various people who I thought were my friends. They all avoided my gaze. One by one, my entire world was collapsing.

Looking back, I suppose I shouldn’t have been as surprised as I was. It’s not like I hadn’t noticed subtle changes in my social landscape; in fact, conspicuous things had been going on for over a year.

I first noticed that something was up when she kept making excuses to avoid hanging out with me all summer. Then in eighth grade, all my friends who sat at my lunch table slowly began excluding me from everything they did, from walking together in the school hallway to having parties and sleepovers without me that they tried to keep secret. As for the few friends who I had left, I kept telling them about my friendship troubles constantly, because it was the only thing that consumed my mind, and that led to senseless arguments, usually through text messages. All of this created a circle of confusion, annoyance, and drama. I felt so alone and helpless. It felt like there was this absence that had been growing inside me for months until it finally became a huge black hole that consumed my entire life.

This is how I got to that day in French class: I finally asked the person who I had previously believed to be my best friend what was up and why she wasn’t hanging out with me or talking to me anymore. After weeks of her avoiding the question, she finally gave me the honest answer: she just didn’t want to be friends anymore, except instead of just telling me she would rather move in another direction, she got my entire group of friends to ignore me.

At first, I was mad at myself. My logic was that if all of my friends hated me, the problem must be with me, not them. I felt like a terrible friend and person.

Then came high school. I decided to turn over a new leaf and make friendships based on the things that I liked, and to not talk about the problems I was having with someone to another friend but instead to face them directly, kindly, and calmly. Only a few months into my freshman year, I have already made so many great friendships, and in doing so, I have been able to see that I am a good friend, and that no one is at fault for the drama I went through in middle school. People change, and sometimes they don’t make the best decisions. I truly think this experience, as terrible as it was, has changed me for the better and made me a better friend and person.

Before, my friends had defined who I was. I felt lost and empty without them. Now I have found who I am, and instead of constantly changing my personality depending on different people that I’m with, I can just be myself around my friends.

In the end, my whole support system was weak and built on the foundation of lies, confusion, drama, and unhealthy relationships. All it took was one jenga brick, and my whole tower crumbled. In high school, I was able to start from scratch and rebuild it, and I’m already so much happier with my life and confident in myself now that I’ve been able to follow the path that’s best for me.