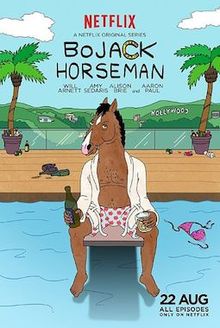 On August 22, 2014, Netflix’s original show Bojack Horseman was released.This animated series created by Raphael Bob-Waksberg is about a horse named Bojack. He was once the star of a 90’s TV show, and later turns into a washed up lonely and depressed drunk that is trying to turn his life around with the help of his roommate and agent. Bojack is played by Will Arnett, who has starred in too many movies to even count.

This is a great show to watch for many reasons. It’s extremely funny, but most importantly, it cleverly  talks about current issues like abortion, drugs, abuse, and guns in our society today. Also, Bojack is a character that many people can relate to: he is in a state of constant self loathing and doing everything he can to be happy, although nothing seems to work. He says something insightful and relatable a few times each episode: for example, at one point he says “You know, sometimes I feel like I was born with a leak, and any goodness I started with just slowly spilled out of me, and now it’s all gone. And I’ll never get it back in me. It’s too late.” Those that are in a bad place often resort to thinking negatively about themselves and this something that they can hear and relate to. This show does an amazing job of displaying what mental illnesses are actually like, and it gets very deep at least a few times every episode, which really makes you contemplate things.

As all the characters try and figure out the meaning of life, different perspectives are shown as they all deal with Bojack and the struggles of their own lives. The show can get a little dark at times; a good example of this is when a character says, “The universe is a cruel, uncaring void. The key to being happy isn’t the search for meaning; it’s just to keep yourself busy with unimportant nonsense, and eventually, you’ll be dead.” Characters casually work in deep comments like these that make you really get down to thinking about things.

Bojack Horseman also has an insane amount of puns in it. In every scene, there’s something in the background:a person/animal doing something funny, a book, screen, sign, or poster with something funny on it.  During one episode, Bojack travels underwater for his movie premiere and there’s no sound during the entire episode, however, it’s still funny due to all the puns in the background that you catch on to. For example, when two of the characters are sitting outside of a gas station there’s a sign in the background that says “ Beef Jerky $2.99 and Beef Friendly for $9.99”.

Bojack Horseman is easily my favorite TV show and I’ve learned a lot from it. This show can and will make you laugh and cry all in the span of a few minutes. The amazing thing is that you can watch through the seasons so many times and never once get bored because you pick up on new things each time and see things you missed before. I’ve watched a ton of TV the past few years and I can say with full confidence that Bojack Horseman is the only show I’ve ever watched where things get really deep and very real. The overall message this show teaches people is that each and every one of us has potential to change/grow and be better.

This show is currently in it’s 5th season and has been renewed for 2019.