Once in a Full Moon review 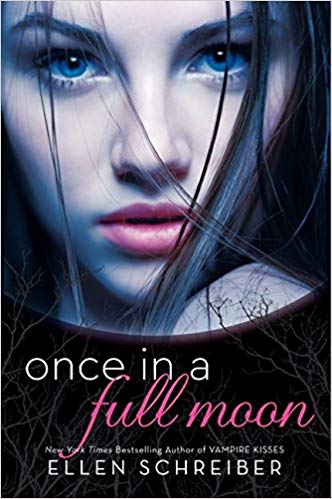 The book once in a full moon is about a girl named Celeste who is very popular and has two best friends Ivy and Abby, and they all have boyfriends, Nash, Jake, and Dylan. But she is only popular because she is from the east side of town. But everything changes when a new mysterious westsider comes town and Celeste seems drawn to him. Eventually she breaks up with Nash and the westsider actually ends up saving her from a pack of wolves. His name was Brandon Maddox. Celeste realizes that he got bit by one of the wolves. She went to Brandon’s house weeks later to thank him, and it was a full moon that night, and she had been warned by a physic that a kiss under the full moon could change your life. And her and brandon did kiss that night. He then turned into a werewolf. She still loves him even though he is a werewolf, and she knows he won’t hurt her.

Once in a full moon is a story that you will not want to put down if you don’t have to, it will make you debate about what will happen next before it happens. I thought the book Once in a Full Moon was a story that draws you in and keeps you wanting to find out what happens next. It had such imagery with every detail, it was a story with lots of mystery, love and adventure. I think books about werewolves and love are some of the best stories. This book had an attention grabbing summary that caught me from the start, which caught my eye and made me want to read the book.

The first chapter was kind of confusing, but the second chapter was a flashback to their childhood and I thought that it helped me make more sense of the first chapter and also made me feel that I chose a good book to read. I do wish there was more added to the end, because it felt like it ended abruptly. There are two more books after once in a full moon. The ending did make me want to read

I wish it would have taken more time to end the first book in that series.