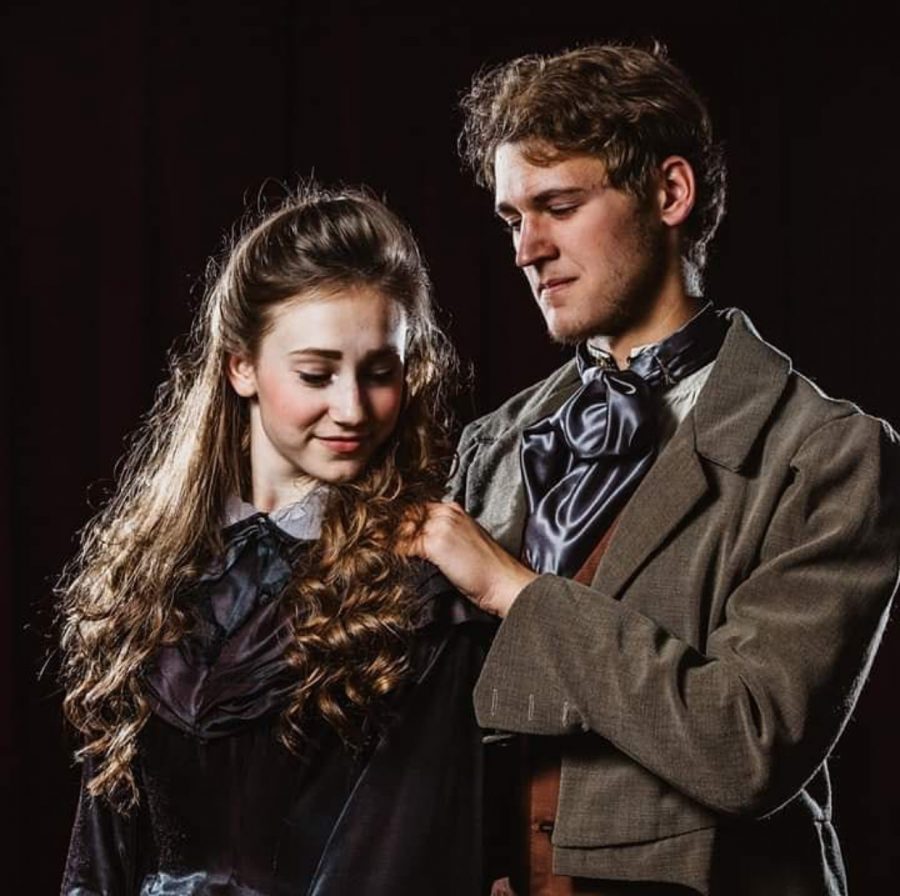 Picture of Ben Eiler during his last performace in Les Miserables, where he was chosen to play Jean Valjean. Also in the picture is Rosemary Coryell, who played Cosette.

Some might say that acting is a natural talent, but junior Benjamin Eiler knows otherwise. He has worked hard to get to where he is today, and he knows that it is not luck that got him here. Eiler, like many other people, was not comfortable with the idea of performing on stage. “ I was afraid of singing and acting and dancing in front of people,” he says. But that has changed now. Instead of fearing the stage, Eiler today sees it as the place where he is most confident, and the first to many steps in a path he yet has to discover.

How it All Started

“I started my first play when I was in 4th grade. I saw a school play, and though ‘that’s pretty cool!’, so I did it and I really enjoyed it. I did it in 4th and 5th grade,” Eiler explains how he started his acting journey. “ In 6th grade, I didn’t do it. The school play was Cinderella, and I was terrified to get up in front of people and actually sing and dance.”

Thankfully though, Eiler’s journey did not end there. “The director in my 7th grade forced me to do it. She said ‘you have to! There is no way you’re not doing it,’” he mentions. “That was a good experience for me to actually sing, because all the other ones had been straight plays, with no singing and dancing.” This time, instead of doing a play, Eiler was taking part in a musical.

“That was Annie Junior, at West Middle school. It was my first actual experience singing in front of people, which was awesome to be able to do.” Eiler feels lucky to have had a chance to play a part of a musical like Annie Junior. “It was my first actual musical, so it has a special place in my heart. There are also friends that I still have today whom I met there, in that one play, and it is really nice to keep acting with them.” After that, Eiler would not miss a chance to act and take parts in plays and musicals. “I did the musicals through the rest of middle school,” he says.

Eiler enjoys acting in general, but stage acting holds a special place in his heart. “I love being on stage because when you are on stage, you zone out of real life. You get to focus on something, and put your entire soul and body into that one thing. You think less about yourself, and [more] about who you are trying to become. And once you really become that character, it is so much fun to enter into their world and live their life.”

The Present Vs. The Future

Eiler would go on to participate in the musicals in high school, taking on bigger roles, like his recent role played from Les Miserables. “It’s a huge role for me, Jean Valjean, which is something I never thought would actually happen. Being able to have such a big part right now helps me learn a lot, like if I actually want to do this in life, which I’m thinking about,” he says.

Eiler is thinking about pursuing acting as a career, but says that “it all depends on who you know in the acting world, and part of it is just getting lucky, and being at the right place at the right time. I’m hopefully going to get into some college and pursue that in college and see what happens after that.” This is what Eiler is planning on, but his parents are not sure how to feel about a plan like this.

“[My parents] think acting is a great thing for high school. Most actors don’t become as successful as they dream of though, and [my parents] want to make sure I can support myself. They are very supportive though, which I really appreciate.” Eiler says.

His parents, Mark and Laura Eiler, say that they are very proud of Eiler’s accomplishments, and the opportunities he seeks to use his talents. They want to ensure that their son has a bright future ahead of him.“Our hope is that Ben chooses a career that makes him happy, uses his talents, and provides financial security,” they say.

Denene Mulay-Koch, the Director of Les Miserables, also gives her opinion on the subject, saying that Eiler “is a very smart and driven young man.” Mulay-Koch also mentions though, that theatre is hard. “I think anyone who wants to pursue theatre should, but only if they can’t see themselves doing anything else,” she says.

Mulay-Koch goes on to say that “there are many talented people out there, so you have to have a very thick skin to make it in this business.” When it comes to Eiler tho, she says that he is “the kind of person who will work as hard as he can to be the best he can be.” One thing Mulay Koch knows for sure is that “if Ben does indeed get his foot in the door, the rest of him won’t be far behind.”

Many people choose acting for the fame that comes with it, but Eiler sees acting differently. “It’s a way for me to give back to the community,” he says. “There are so many people who enjoy seeing a story. As humans, we started telling stories as a way to keep people safe, and those have become parables in the Bible. As we have progressed through society, stories have become told in different ways, but theatre is one way that has been historically very prominent and still is today. I really enjoy sharing stories with people especially through theatre.”

Great things never go unnoticed. This applies to most things in life, and acting is definitely one of those things. There is always an actor or an actress that stands out from the rest, and their outstanding performance makes them hard to miss. Eiler is definitely seen as one of those actors at Portage Northern High School and in Portage as a community.

Many people nowadays, especially teenagers, seem to have a lack of appreciation, and even when they do appreciate something, they fail to show their appreciation. Mulay-Koch believes that Eiler is different though. She thinks that Eiler stands out because of his graciousness. “He shows tremendous respect for those who mentor him and he understands how to show appreciation,” she says. Mulay-Koch believes that Eiler’s kindness will help him a lot in the future, because “people will want to work with him over and over again”.

Other people are noticing Eiler too. Junior Syed Daniyal thinks that “Ben performed his scenes so well” Daniyal says that Eiler’s solo scenes were “really powerful and moved the story on brilliantly.” About his performance in general, Daniyal thinks that “Ben stole the show whenever he was on stage. It was so easy to notice his amazing performance.” Daniyal “could tell that he worked really hard, and he definitely deserved to play a big role like Jean Valjean.”

Even people who don’t know him well, can tell that Eiler is different than other kids when it comes to acting. “Ben did absolutely amazing,” says eighth grader Sarah Salih. “His voice was wonderful and his performance was fantastic.”

Something that Mulay-Koch has noticed about Eiler is definitely his great attitude and his kindness. She believes that this is something other people should learn from Eiler. “Even after playing a lead like Valjean, Ben stayed humble, kind and thankful,” she says. “He has strong morals, values and an open heart that makes everyone around him feel important and special,” Mulay-Koch continues. After recently working with Eiler, Mulay-Koch says that “he has been a wonderful leader and role model for the entire Les Miserables company.”

To those who are passionate about acting or would like to try it out, Eiler himself says that they should “just go for it.” He explains his thoughts, saying “there is no real shallow end in acting. It’s either you jump head first in and jump straight into the deep end, or you just put a toe in. There is not really a good way to go middle of the road.” Eiler also believes that “what you put in, you get out. If you put in a ton [of work] into acting and you devote yourself to it and work as hard as you possibly can, you’re going to enjoy it no matter what. But if you half heartedly do it, like most things, you only get a half hearted result.”