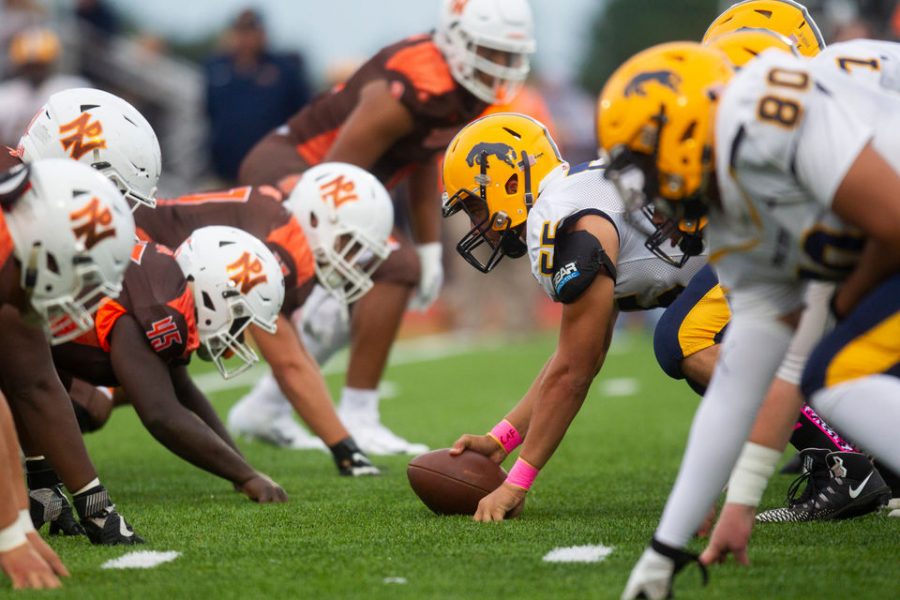 Tonight, the varsity football team will face Okemos in the District championship game at 7:00 pm at Huskie Stadium.

To get to this game, Okemos beat an undefeated Jackson team 31-22. The Huskies earned their spot by defeating crosstown rival PC in a thrilling 35-7 victory. PN meets Okemos with a playoff point listing of 82 compared to their 68.

The win over the Mustangs was a significant accomplishment for the Huskies, with PN coaching staff calling it a “legacy game.” The Huskies played PC earlier in the season, at Huskie Stadium, and lost by a single point.

There was a different energy headed into the matchup this time. “The energy was way different going onto/leaving the field. It felt like we had a lot more support, which created a different type of vibe towards our football team,” said senior Mitchell Derhammer, one of three team captains.

“It was certainly a special night. To win a playoff game against your rival, with whom you shared the SMAC West Championship, on your home field, with the kind of student and community support that came out, made it a night that will remembered for a long time,” said head coach Pete Schermerhorn.

Athletic director Chris Riker highlights the fact that even though the game was at Huskie Stadium, it wasn’t considered a “home” game for the Huskies: “It was nice to see our team deal with less than an ideal situation (having to be the visitor at our own stadium) and come out and play with intensity and focus for the entire game. The team played with a great deal of emotion and played as a team and put together a complete game both offensively and defensively,” he said.

The last time Portage Northern beat Portage Central was 4 years ago in 2014, and this was also the last time they played in the District Championship game, where they did not advance.

The team has been preparing intensely for tonight’s game against Okemos. “We’ve watched film of them, and we’ve been told by our coaches to come in with the right mentality, not being satisfied, but wanting more and being ready to do what no other Portage team has done,” said senior Brian Sykes. He is referring to winning a district championship: while the Huskies have played in the crowning game before, they have yet to advance.

Come to Huskie Stadium at 7:00 pm tonight to find out if the Huskies will finally break the streak. Tickets are $6 and no passes are accepted as it is an MHSAA tournament game.