Protesters should not be filling Bronson Park 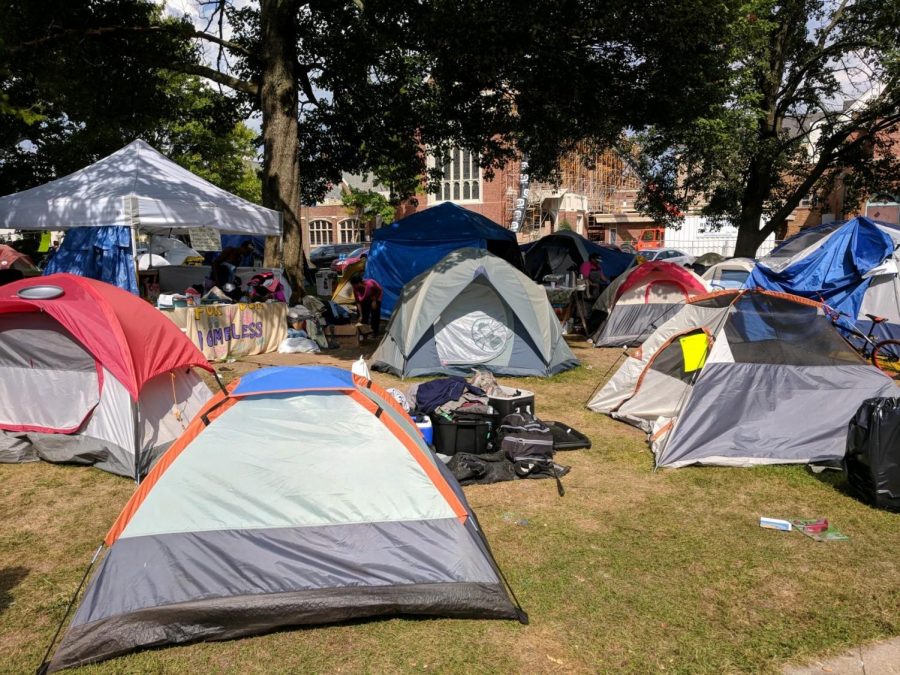 Homeless encampments like these absolutely fill the scenic park

Bronson Park is a scenic park, named after Kalamazoo’s founder Titus Bronson. In the summer the public area is filled to brim with flowers of every color and shape. The trees are filled with green leaves of every shade that could be pulled from the human head. In the winter, Bronson part has even more to offer. The Nativity is a more popular sight, and sidewalks are lined with candy canes.  The once-green trees are snow covered, and filled with lights.

Recently this serene park was visited by protesters, and this is not an appropriate use of this beautiful space, especially for this particular cause. The protesters, who were primarily homeless, set up an encampment on August 19, in response to suggestions of different penalties for spending a night in the park. In the minds of many, this translated to the idea that homeless is a crime. This isn’t true, however, the motion merely meant punishing the behavior or staying in the park specifically, not the situation. In fact, there are already existing ordinances that prohibit staying overnight in a park, so it wasn’t even a new measure.

Many homeless individuals are not happy with the conditions of the shelters and prefer to stay outside, which is one of the reason they protested. The largest shelter is, allegedly, in bad building condition. This should be addressed, but many homeless shelters are run on donations and volunteers. Shelters are places to get temporary help, they are not motels.

The Council has, at this point, relied on homeless shelters like the KGM (Kalamazoo Gospel Mission) to control this issue, and this is irresponsible.  Non-profit organizations that are not government funded should not be completely responsible for handling the care of the homeless. The housing cost is too expensive for many citizens, and this makes it hard for people to get back on their feet. In Kalamazoo alone, there are hundreds of children that are homeless. The world is so divided, and the people rely on leaders to help unite the people. City officials  need to take more responsibility for the care of the homeless. Everyone deserves a roof over their head.