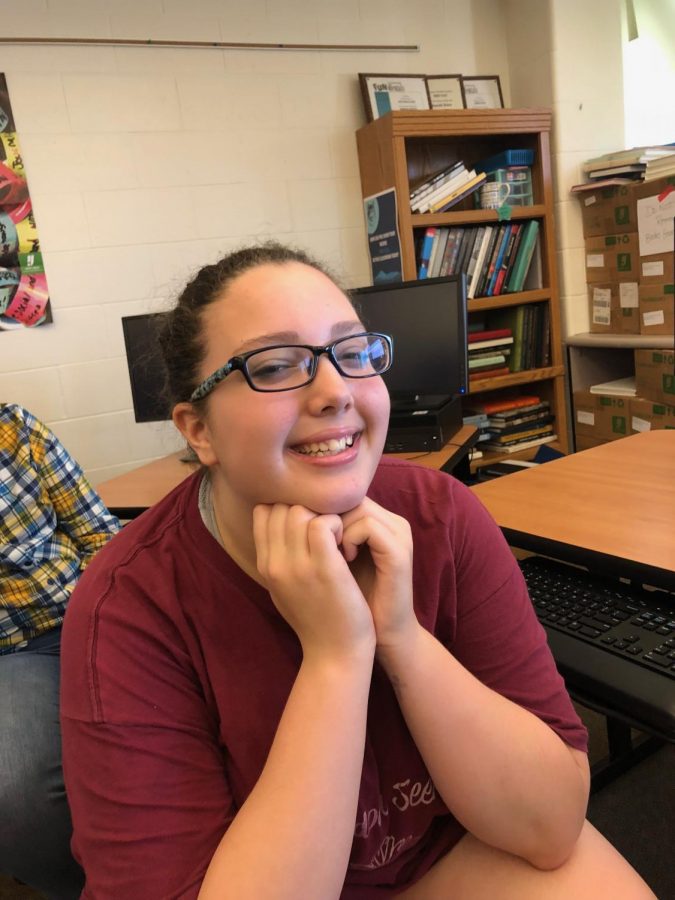 All smiles, Abby VanderBerg rarely minds being the center of attention. "The thing I like most about public speaking is that it's not necessarily how much skill you have, but how passionate you are and how much your heart is in it," she said.

“Started therapy in 8th grade / Had a personality made up of tests and pills / Lived like the uphills were mountains / And the downhills were cliffs.”  These words by Shane Koyczan moved freshman Abby VanderBerg as a sixth grader, and a year later, launched an interest in forensics that she is preparing to extend into high school.

VanderBerg’s interest in forensics began much earlier: her older sister and her older sister’s boyfriend both competed in high school forensics, and her sister’s event was storytelling. “She would practice the piece in front me, and I still remember it,” says VanderBerg. “It was a fairytale, and I loved to see how she put it all together, with her hand gestures and the different voices she would make.”

Despite her early exposure, it wasn’t until one of her former English teachers asked her to join the Forensics club at WMS that it became a hobby. In sixth grade, teacher Adrienne Graham had exposed Vanderberg to Shane Koyczan’s spoke word poem, “To This Day.” The impact was substantial: “The first time I saw it, I cried,” she said. “The poem is basically just about the bullying a lot of kids suffer, and how you can get through it, but it still has an effect on you.” A year later, in seventh grade, VanderBerg emailed Graham to ask the title of the poem, and Graham suggested that she use it as her competition piece for Forensics, which Graham led.

Vanderberg joined the team and competed in both the spring and fall competitions as a seventh grader. She broke into semifinals at her first competition and was hooked. “It gave me this sense of being in the moment, and it just felt right,” she reflected.

Her eighth grade year was a little different: “I had an opportunity to do a multiple based on the female Ghostbusters, and I was going to play the character Abby, but sometimes I overthink things,” she said. Ultimately, she decided not to take part in Forensics that year. “I ended up regretting it later,” she said.

That sense of regret has fueled a passion for the high school Forensics team, of which VanderBerg wants to be a part. She has the formal forensics class next semester, when the competitive season for the team takes place. To prepare, she is exploring poetry and prose source material for inspiration.  One of the front runners is a novel about mental illness titled Challenger Deep. “It’s an interesting book because it’s not just from the person’s perspective, it’s from their son’s perspective,” she says. “His dad is schizophrenic, and he has to learn how to make that his reality.”