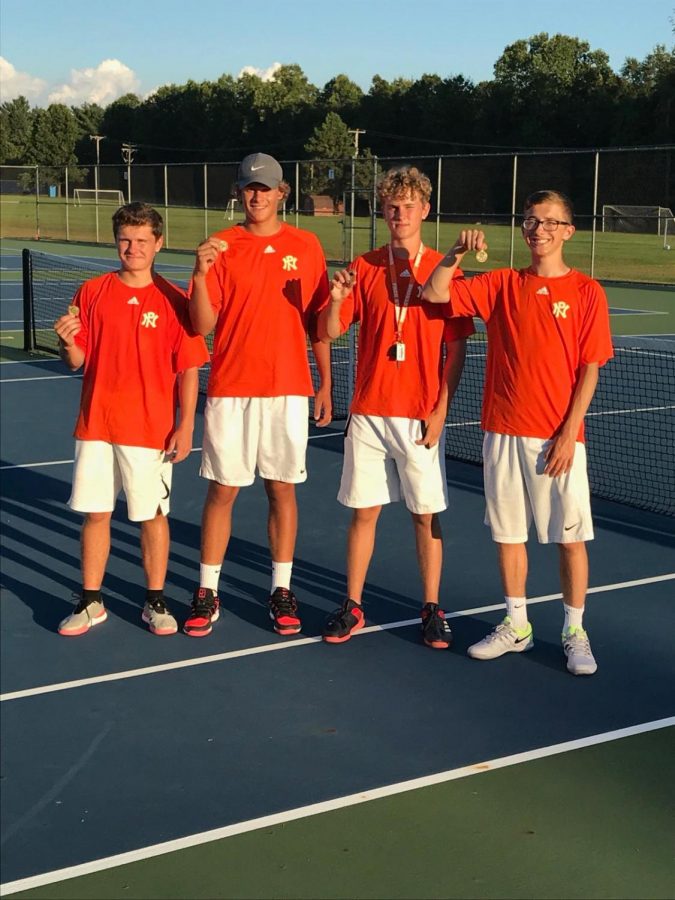 Alex Wootton, Jackson Graham, Graham Holley and Keegan Bach celebrate with their medals after winning their flights at the Greater Kalamazoo tournament. This was the first time in history that Northern swept singles.

The Portage Northern men’s tennis team beat Portage Central for the first time in school history on September 11.  The Huskies beat the Mustangs 5-3 with wins from one, two, three, and four singles as well as four doubles. In 53 years, they have come close, but have never been able to cross the finish line. The win against Portage Central has really helped the team’s confidence as well their work ethic.

Huskies are leading the season with a record of 11-0. They have also decided to ramp up their practices by working on skills and conditioning. “This is the most running we have ever done” says Senior captain Keegan Bach.

In addition to the team being undefeated, Jackson Graham, Graham Holley, and Keegan Bach all have 14-0 records on the year. “The season has gone perfectly so far” said Junior Graham Holley. “I feel the difference between this season and last, I have a better understanding of what it takes to win.”

The Huskies kept their momentum going with another victory, winning the Greater Kalamazoo tournament for the first time in school history. They won all four single flights and took second place in two and four doubles as well as third place in one and three doubles.

The season is in full swing as the Huskies look to carry their winning streak into big matches against Mattawan, St. Joe and eventually the ultimate goal of making it to states for the second year in a row.

The team’s next event will be the conference tournament on Saturday, September 29.