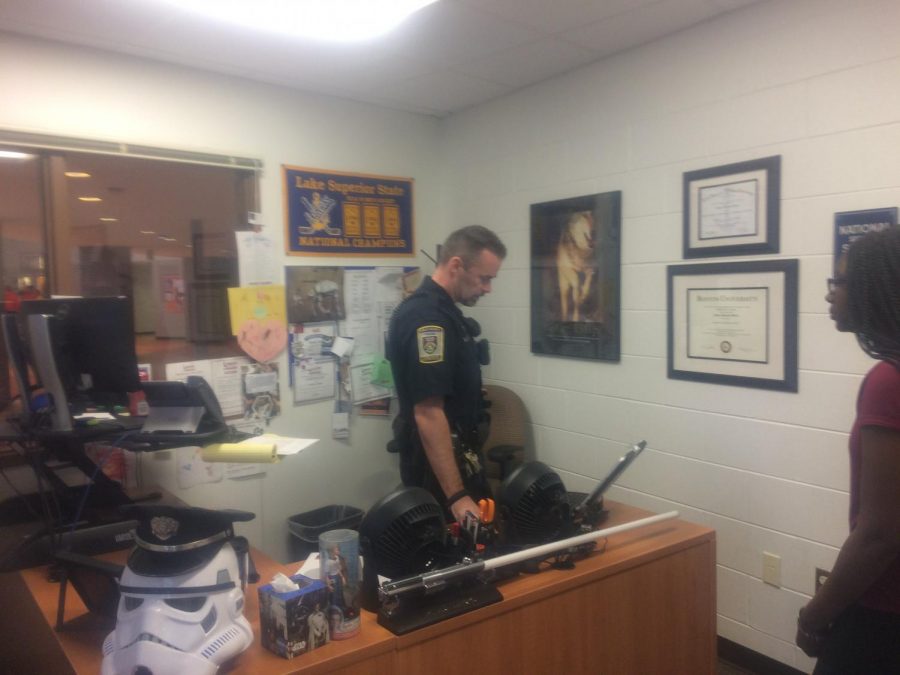 School Resource Officer Nate Slavin in his office command center, where he closely monitored the event and made the determination to initiate the precautionary lock-up for student safety.

The high school initiated a precautionary lock up at 9:13 this morning as the result of an attempted unarmed robbery at the Walgreens on Milham and Westnedge that occurred at 8:55 am.

Students were originally held in second hour after the bell, but because it was determined that there was no imminent danger to students inside the building, students were allowed to move from second to third hour at 9:40, but remained on precautionary lock up until the Huskie all-clear was officially given at 10:01 am.

Student reactions to the lock up were mixed. Some were not concerned at all. “I was unbothered because it was a lock up and I had more time to do my homework,” said junior Fahima Hossen. “It didn’t make me nervous or scared. I felt safe because I knew that our school has precautions and would update us right away,” said junior Maggie Johnson.

Others were worried.  “I felt kind of weird because I wanted to know more about what was going on,” said junior Sonam Raghubanshi. “I was scared out of my mind,” said junior Madison Blubaugh.  “I felt like someone might use this opportunity to shoot up the school,” said junior Maham Khanum. This thought was at the center of students’ consciousness because there had been a school-wide ALICE drill the week before, where staff and students prepare to stay safe in the event of an active shooter situation.

Officer Nate Slavin had comprehensive knowledge of the situation and made the determination to initiate the lock up. “Based on the information, I have to make the determination of whether or not my school is in danger,” he said. “We didn’t know whether or not he left on foot or in a car, so at that point I’m going to assume that he left on foot and is running towards our school.” Slavin has a list of several schools, daycares, and churches that he looks out for, and when he makes the determination at Northern, he has to call the other locations and make sure that everyone is safe. “My counterpart at Central, Officer Houser, usually helps me out with that,” he said. “I call him and say, ‘pull up maps, figure out where the schools are, and help me out,’ and that’s what happened today.” As soon as Slavin had the suspect’s description, hall monitors were given this information so that they could let in students arriving from off campus classes to get them into the safety of the building while simultaneously making sure that any potentially threatening individuals were not admitted.

The K-9 unit arrived on the scene to track the suspect, who  by that time had already fled east and south. They are still tracking the suspect right now, but “we are way out of the danger zone,” Slavin said. “I am comfortable with the fact that our suspect left in an opposite direction.”

At 9:56, the school district sent out the following statement to parents at Portage North Middle School, which is part of the Northern campus: “The Portage Northern campus including North Middle School has been requested to go into a Lock-up by Portage Department of Public Safety as a precautionary measure. A lock up means all entrances/exits are secured and no one is allowed in or out of the building. Students are safe and will remain in their current hour class. Instruction will continue. For everyone’s safety please do not call or come to the school. We will notify you as more information becomes available.”

This was followed by an additional statement at 10:06: “Portage Police have lifted the precautionary lock up for the Northern Campus. Thank you.”

Portage Northern notified parents through Skyward after the situation was resolved.  “This morning at ~9:10am Portage Public Safety informed us of an attempted robbery near Westnedge/Milham and in response, we instituted an immediate building lockup. A lockup is a precautionary event in response to a potential outside threat. We use the term ‘lockup’ in our drills so our staff and students know this means there is no imminent danger within the building and that while we continue instruction, everyone stays in place with all doors locked within the building, as well as all exterior doors. Our highest priority is always student safety – this means a secure facility and campus with no students moving around within the building nor any students allowed to leave the building. Our police liaison kept us informed throughout the entire situation and released our building to resume normal activity at 10:01am. If you have any further questions, please reach out to us anytime,” the message read.

The timing of the notification after the Huskie all-clear allowed the most complete information to be conveyed to Northern families while allowing staff to focus on maintaining an exceptionally secure environment for students. “With the pace and the continually changing nature of the situation, the most accurate information wasn’t available until the lock up was cleared,” said Communications Coordinator Brenda Marsh. “Keeping our parents informed is a very important priority, but student safety is an even higher priority.”

Other primary sources have not been available for comment. A representative for the Walgreens store that was affected said, “I cannot speak about the situation at this time, but I can direct you to corporate.” Corporate also had no comment. The Portage Police Department also had no information to share at the time of this posting.

Later in the afternoon, Portage Police indicated that the suspect had been tracked by the K9 unit to Walnut Trail Apartments, but that the scent had been lost there. Click here for a description of the suspect and the store security camera image. Anyone with information that could help apprehend the suspect should contact the Portage Police Department immediately at 269-329-4567.