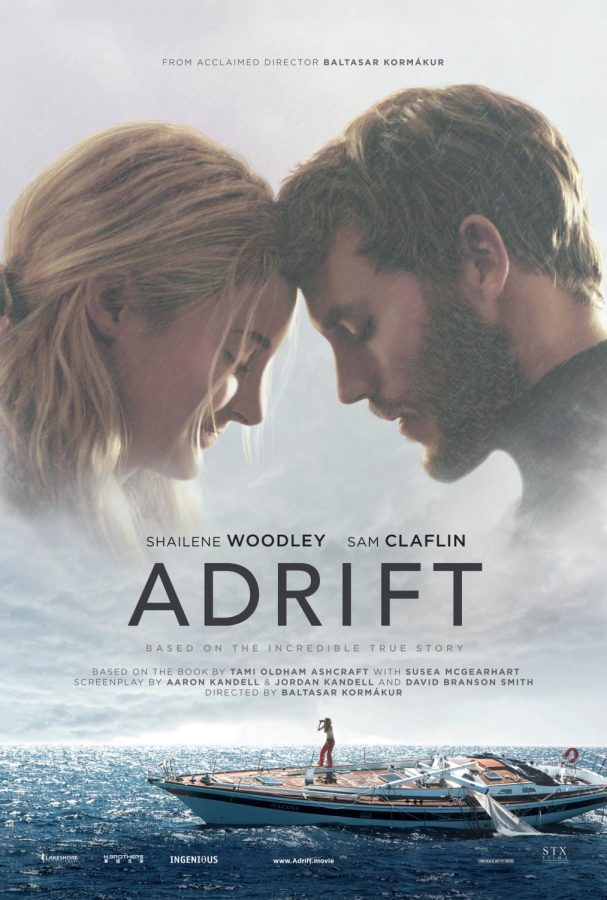 Within 99 minutes, Director Baltasar Kormakur encompasses Tami Ashcraft’s true story of the bliss of new love, the anxieties of natural disaster, and the misery of being stranded in the open sea in the romantic thriller Adrift.

Released on June 1st, 2018, Adrift told Ashcraft’s story of sailing into the eye of Hurricane Raymond in September 1983 with her fiance, Richard Sharp. The aftermath of the hurricane was serious, and she became stranded in the Pacific, missing from civilization for days before ultimately finding her way back to safety. In the movie, she is also responsible for nursing her fiance back to health, as he was swept off the deck during the ordeal. Coming from an audience member whose biggest fears are the deep waters and what is hidden beneath them, this movie as a thriller is deserving of 5/5 stars.

The main characters were Tami Oldham, played by the talented Shailene Woodley, and Richard Sharp, played by an equally talented co-star, Sam Claflin. Woodley played the familiar role of a lover, considering her work in The Fault in Our Stars, there would be no one better to  also play the role of someone distraught with tragedy. Moreover, Claflin’s execution of a lover and later unconscious and lost sailor was not a shocker considering his work in the hit movie Me Before You. The choices for casting were clearly some of the best made for the production. A few other things to appreciate about the movie were the setting and the accurate details that were parallel to the true story: the beginning at the Tahitian shores, the accuracy of the vessel used in the movie and the actual vessel in which the couple sailed are all consistent with the real narrrative.

Though the movie’s plot is pretty straightforward, it played out to be a lot more entertaining by Kormakur’s use of cross-cutting. Cross-cutting describes the plot’s switch from Ashcraft and Sharp’s love story to the crazy turn of events and questions of life or death during their 4000-mile sail from Tahiti to San Diego. This keeps the audience on the edge of their seat. It fulfills the satisfaction of the hopeless romantics watching Sharp and Ashcraft get feelings for each other through their common passion for the sea and adventure, and provides the thrills for those watching the two struggle to survive such perilous conditions. Overall, it definitely did fulfill its main purpose of telling a compelling story and giving a real-life visual of what it had been like for those 76 days in the waters before finally coming to Hawaii. It also does all of this while providing entertainment, and it comes in novel form as well, Adrift: 76 days Lost at Sea by Steven Callahan. This movie is a must-watch that will leave viewers breathless.