For Snigda Narisetty, a mix of cultures can be more fun than just one 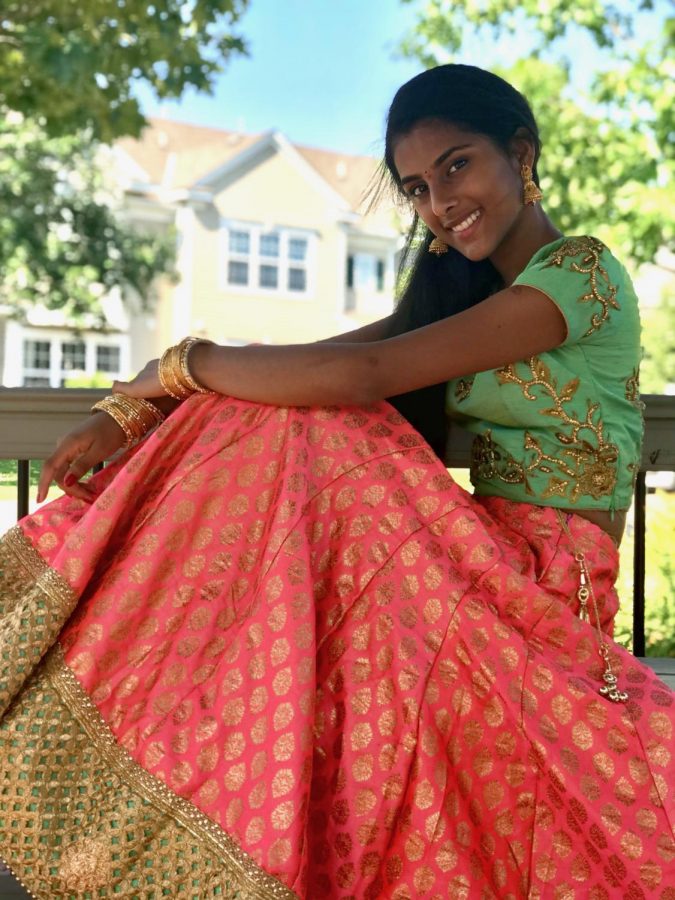 Here, Narisetty is all dressed up and ready for an awesome night of fun with friends and family. Photo by Sunil Narisetty.

Junior Snigda Narisetty knows that she is different from most of her peers and other people around her. There are many reasons as to why Narisetty is different, and it’s a reason that makes her feel very special and lucky: her personality is a mix of two cultures, and she takes advantage of that to learn more and participate more fully in each.

Narisetty moved to the US when she was just 3 years old. Although at home she still upholds her culture and language, some of it is lost. She was born in India in 2001, in a town called Suryapet, and moved to a small town in England called Sandwich a year later.

Although she has lived in three different countries, most of her life is centered here in Portage.  Having left India at a very young age and living in two other countries, Narisetty’s traditions are different from those of others around her. Her personality is a mix of the American and the Indian ways of life. She loves celebrating her culture and traditions, as well as interacting with cultures that are not her own.

One of Narisetty’s favorite things about her culture is the fancy clothing. Narisetty loves dressing up in all the fancy jewelry. “Sometimes it’s tedious to dress up all fancy but nevertheless it’s fun and makes for great pictures,” she says. Of course, fancy dresses require somewhere fancy to wear them, and the Indian Association of Kalamazoo (IAK) has made that possible by organizing events within the community where everyone has a chance to participate.

Even though Narisetty comes from a Catholic family, a lot of her friends that she grew up around are Hindu, and they celebrate their Hindu holidays. Narisetty usually takes part in these events and participates with her friends for the fun. “For me, it’s not a matter of religion but one of culture. These holidays are not just Hindu holidays, many parents grew up celebrating them as well and it’s another way for me to hold on to traditions,” Narisetty says.

Right now, an upcoming event is Diwali, which is the Hindu festival of lights. This year it is going to be on November 7th, and Narisetty is very excited about it because she and her friends participate every year. “I love dancing so much, and now that I don’t do Bharatanatyam, a classical Indian dance, I don’t have many chances to perform and Diwali is the one night a year I can,” Narisetty says.

Every year, the Narisetty family attends the events in the community and there they meet all their friends that have almost become family after all the years living in Portage together. “Portage is a home away from home and the Indian community itself is very diverse and includes many of the different religions and cultures that stem from India,”  says her father, Sunil Narisetty.

Another big part of the Indian culture is the food, because each region in India has its own style of cooking and distinct flavors. The south, where Narisetty is from, is known for hot and spicy foods like dhal, biryani, and bajji. One of the dishes that Narisetty likes is bajji, which is a large stuffed chili pepper coated in batter and fried. Her all-time favorite dish is hyderabadi biryani, a mouthwatering and authentic dish with succulent chicken in layers of fluffy rice, fragrant spices and caramelized onions.

Unlike her older sister Susmitha Narisetty, who had time to learn the language, Narisetty moved out of India at a very young age and she didn’t get a chance to learn Telugu at all. She now can understand it and speak it, but has a difficulty reading and writing it. Even though Susmitha Narisetty lost a lot of the Telugu too and completely lost the Hindi, she had learned at home and spoke fluently, she can still somewhat read and write Telugu, and Narisetty hopes to achieve that too.

Snigda appreciates taking part in the Indian as well as the American traditions, and her goal is to learn more about the two cultures in  the years to come.