Hailee Clark is drawing a picture of her future in art 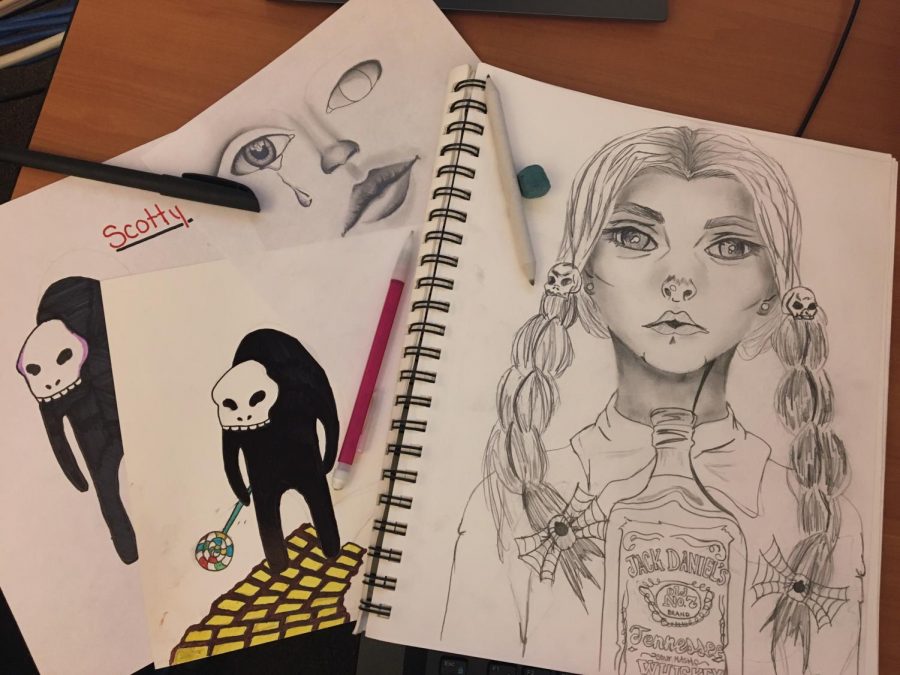 Pictured here are some of Hailee’s artwork. “I mostly like to draw realistic things, especially people,” she said. She was also chosen to draw the illustration for the staff editorial in the first print edition of the Northern Light. Photo by Hailee Clark.

As the seniors settle into their final year at Portage Northern High School, they’re being asked more and more about their plans for the future. Some are looking for scholarships in activities such as athletics and theatrics, but senior Hailee Clark is on a different route for plans: after going to college for art, she would like to be a tattoo artist.

Clark was exposed to art from a young age, first seeing her mother’s work displayed throughout the house. As she grew up, she was inspired by what she saw. However, it wasn’t just the pieces her mother made around the house that got her into art, but also her strong connection with her mother as well. Clark describes how her mother, “sometimes even helps with my own art process, too, when I ask.”

A few years ago, she had a somewhat different set of hobbies consisting mostly of volleyball, but when she stopped playing her junior year, she really started perfecting her art technique. A majority of her artwork is pencil or pen drawing.

Clark is currently taking art classes at the Kalamazoo Institute of Art (KIA), preparing to pursue her goal of going to college for art in illustration and photography. Clark has also been recognized multiple times for her artwork, and has won certificates in honor of her work, had pieces featured in the non-profit Bronson Methodist Hospital in downtown Kalamazoo, and even won a contest against 300 other contenders to have a watercolor piece promoted in the KIA.

Regarding her daughter’s many achievements, Hailee’s mother, Natalie Clark, says, “I’m very proud of her for all of her achievements. When she digs into herself to create something from emotion, she’s developing something others can feel or have felt themselves. I believe that’s what allowed her to have this recognition and will continue to validate her artistry and make her grow.”

Her grandfather, Scott Forbes, also spoke on her behalf, remarking on some of her art that was featured in the KIA, and revealing that, “I bought some of that too.  So if you said I was her number one fan, you might be right. I know her Mom and Grandmother and I all adore her work. I try to support it with materials if she asks, and when I see a piece that I really like, I try to buy it.  You never know in the art world who will be the next Picasso or Munch. I have no reason to believe it can’t be H. Clark,” he said.

Both her mother and grandfather express that Clark definitely has a future somewhere in art.  Her family all agreed in saying that over the years that Clark’s “artist’s eye,” as her mother refers to it, has matured from little doodles and scribbles all the way into elaborate pieces that vocalize her emotions through their visuals.

Clark’s art definitely reflects her emotions. She states that the emotion portrayed all depends on what she’s creating, explaining that what she’s feeling at the moment will be what she’s trying to emulate in her art. Her mother also adds that, “I used art as a place to go to express myself and to relieve stress/overwhelming emotions. It was a place I could put it down on paper and leave it there. I see Hailee doing a lot of the same thing.” One such instance of this that she has on display is her recently painted phone case, which she said was meant to be abstract and messy like life. No matter what she’s creating, her artwork is definitely something to look out for.