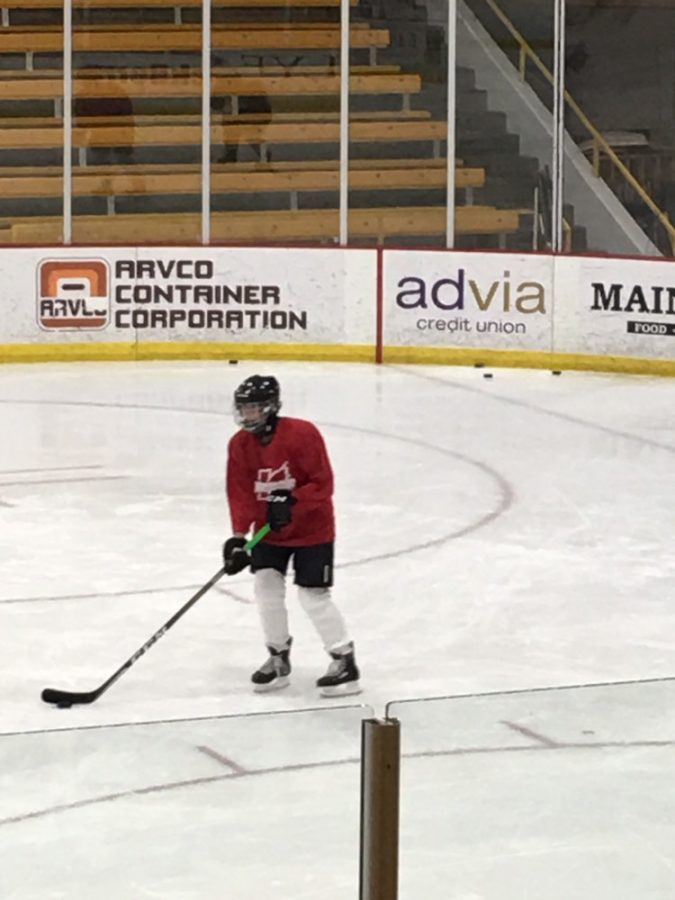 Read practices for upcoming hockey tournaments at Wings West. “She has done a good job adjusting to everyone on the team,” said Coach Shaffer. Photo by Jennifer Palmer.

At first glance, Sophomore Cerena Read doesn’t appear to be an athlete. She speaks nervously and moves hesitantly, lacking the confidence often associated with sports. All this changes when she begins to discuss hockey.
Read has always wanted to play hockey. Her first encounter with the sport was the floor hockey played in her elementary and middle school gym classes. “It was just aggressive, you know,” says Read, reminiscing. Though she was interested, she did not become involved in playing outside of school until 2017.
Cerena’s brother, Jaxton, enrolled in a Learn to Skate beginner class created by the Kalamazoo Skating Association to teach ice skating basics. Read decided to join the class as well, and she, “really liked it.” Encouraged by her success learning to skate, Read chose to take the next step and register for a course that would teach her how to play hockey.
One year later, Cerena decided to try out for the Lady K-Wings. As a beginner, Read was nervous about trying out for a team of experienced players who were possibly leagues ahead of her skill set. Despite her fears, Cerena’s hard practice paid off and she made the team. Even better, Read describes her teammates as, “encouraging, nice people” who support her on and off the ice.
“In the beginning she was a bit shy,” says Coach Kevin Shaffer. “She is not shy anymore.” He believes, “Cerena is looking more confident from one practice to the next.”
Shaffer isn’t the only one who’s recognized a positive change in Cerena. Her father, Rick Read, has also noted Cerena’s growth. He explains, “When we first offered Cerena the  opportunity to participate in the Learn To Skate Program about a year ago, she could barely make it across the ice without falling. In less than a year she tried out and made the Lady K Wings 16U hockey team. I have seen her become more confident, stronger and more independent.”
He also is certain hockey that has, “helped to teach [Cerena] the importance of hardwork, shown her the rewards you gain by not giving up and completing what you set out to accomplish.”
“If you’re not determined, then don’t,” says Read purposefully. She’s already committed a year of her life to this mantra and grown tremendously because of it. Although Read has expressed some uncertainty regarding her hockey career, when asked if she would continue to play, her answer was a quiet, but unmistakably confident, “Yeah.”