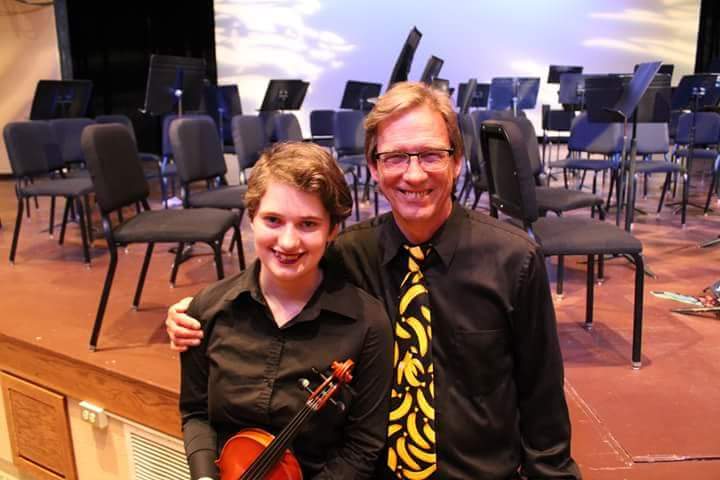 Dodge poses with Hazen after the spring concert, which was the last concert that he directed for the high school. “I had a bunch of mixed emotions; I was happy, but at the same time I was really sad that my favorite teacher was going to be gone...but he deserves a good retirement,” she said.

Senior Kaylynn Dodge is up on stage playing the violin so sweetly and gracefully that she is pulls on the audience’s heartstrings because of how she plays. She is even smiling as she’s pulling the bow back and forth across the strings of the violin. She’s not alone, though: she’s one of many students being led by now-retired orchestra director Leo Hazen.

While sweet, memories like these are in the past for Dodge. She played for violin in the school orchestra for 6 years, and she enjoyed playing with the school. She is no longer in orchestra, however: when Hazen retired, she, “couldnt imagine being taught by anybody else.” Many of her friends made the same decision, which further encouraged her to depart the program. “It’s hard for me to make friends,” she acknowledged.

Dodge’s orchestra days may be not be over for good, “Yes, I would like to join orchestra again on my free time for fun,” she said. There are other local opportunities, like the Kalamazoo Junior Symphony Orchestra, that she can pursue to continue to grow her love of music.

Dodge still plays the violin in her free time. “Music is a big part of my life,” she said. Her her love of playing is also well-known in her family:  Dodge’s grandmother Cleo Sage said, “She has a lot of passion in her music.” Her mother, Jeanette Sage, said, “She’s a good player, she just needs more confidence.”

When asked what makes a good violin player, Dodge said, “Having the passion in their hearts and enjoying doing it, because the audience can tell when they really enjoy what they do by the emotion they put into the instrument.”

Hopefully Dodge can find that joy on stage again, if not at the school, then at another venue.