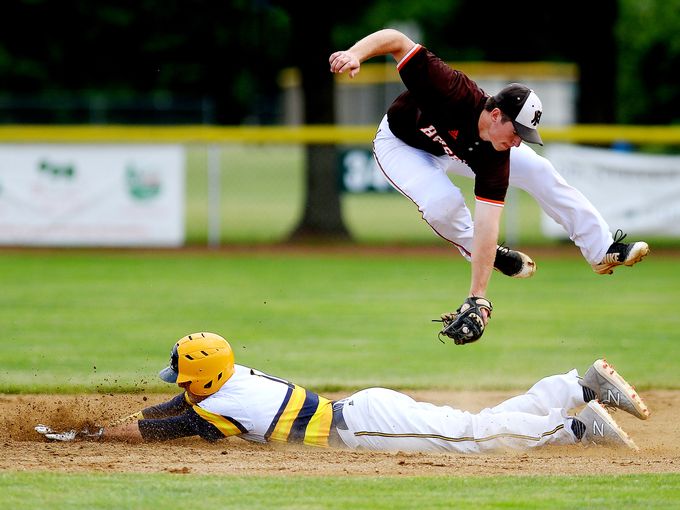 After a thrilling 4-2 extra inning victory against Brighton, Portage Northern lost in the championship game 5-1 to Grand Ledge, ending their season. This was the last PN baseball game for the team’s 12 seniors, who were leaders and role models on the field and in the dugout throughout the season.

The final game was a heartbreaking moment for all of the players. “It’s hard to walk away from something like that,” explains senior captain JP Gonzalez. “We’re a brotherhood.” The team fought hard to keep the season alive, but couldn’t mount the comeback. “Once it got farther down in the road, we knew that our time was running short, and that we needed to capitalize, and we just hit balls right to them,” says senior Brayden Speller. Despite some hard hit balls and good at bats, the Huskies struggled to score on Saturday.

Coming off a down year last season, which ended in an upset loss against Loy Norrix in the first round of district play, the Huskies bounced back and had a very successful season, in many parts thanks to the leadership of the seniors. The 12 seniors outnumber the underclassman during most of the season, and this leadership and experience certainly helped the team overcome last year’s challenges. However, with the large senior class, not everyone can start. In the championship game and throughout the playoffs, there were only 3 seniors in the starting lineup. This didn’t stop the seniors from making an impact. “That even made it more special, because there are even more mentors in practice and hyping them up on the field,” explains Speller. Despite a bitter ending, the seniors have created a team culture that will stay with the team for seasons to come.

The loss of the senior class will certainly be felt in the future. “I’m especially going to miss the seniors because they taught me so much this year about how to be a leader and just overall made this season so much better,” says sophomore Gannon Andrews. Along with the 12 seniors, this season’s team included 7 sophomore and 1 freshman during the playoff run, 4 of whom were starters. The large senior class helped welcome and lead these underclassmen onto the varsity team and into large and productive roles. Finally, Andrews also explains that this senior team taught him that if the team can go from losing in pre districts to winning the district and advancing the the regional finals, the team can make the jump next year all the way to the state championship.

Despite the season not ending the way the team had hoped, they are still enjoying the time they had together. As senior Ben Friedman put it: “We are proud to have this be our last season.”

The Huskies advanced to the regional championship game after an extra inning victory against Brighton. The game was scheduled to be played on Saturday, but was postponed to Sunday after just two batters. The Huskies struck first, plating 2 runs in the top of the first. After Brighton answered with two more in the second, it took until the ninth for either team to score again, when the Huskies scored the two winning runs. Senior Michael Lincoln pitched a great game, allowing only 2 runs through 8 innings, when he reached the maximum pitch count. Junior Cameron French got the save in the ninth. Lincoln also lead the team with the bat, with two hits and an RBI. The Huskies again played well defensively, including great plays by Sophomore right fielder Parker Brey, Senior shortstop Jonathan Wolf, Senior center fielder Noah Hecht, and Sophomore catcher Gannon Andrews. The crowning defensive play occurred when Hecht fielded a base hit and threw what would have been the winning run out at home. Andrews fielded the ball on one hop and reached out with his bare hand to make the tag. Andrews also had a couple great clutch plays on pop ups behind the plate. After the win, the Huskies were waiting to face the winner of the Gull Lake, Grand Ledge matchup.

After Grand Ledge defeated Gull Lake in a rainy 12 inning battle, the championship game was postponed until Monday because of wet field conditions. Grand Ledge chipped away with one run in 5 of the last 6 innings, taking the lead in the second and never surrendering it. The Huskies did manage one in the sixth, but were not able to mount the comeback. Junior pitcher Cameron French started for the Huskies, pitching four strong innings allowing 3 runs. Following French were relief pitchers Junior Tyler Helgeson, Senior JP Gonzalez, and Sophomore Nolan McCarthy. Grand Ledge, who is ranked sixth in the state, will play in the state quarterfinal on Tuesday.