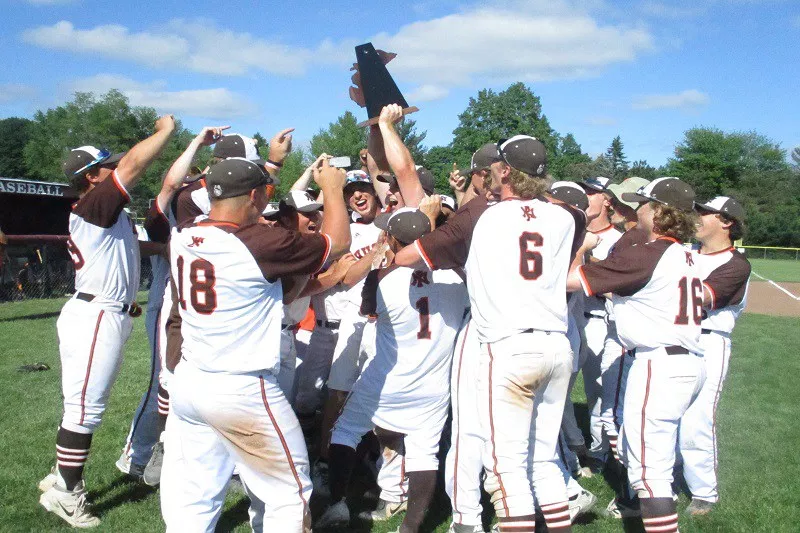 The Portage Northern baseball team captured the district championship on Saturday, with two dominant wins 6-2 over Mattawan in the semifinals and 9-1 over Portage Central in the championship game. The huskies advanced to the district tournament after a thrilling 10-7 victory at Saint Joe.

Senior captain and shortstop Jonathan Wolf had a huge role on Saturday, making three crucial plays to rally the defense. After a difficult game at Saint Joe in pre districts, the Huskies played extremely well in two sizable victories. “I felt like we were playing loose and playing to the best of our ability,” Wolf said. After a rough start against Saint Joe, the team was able to relax and play Huskie baseball after an hour long rain delay. The team settled down early on Saturday, committing only one error over both games, compared to four in the single pre districts matchup. Also, the team stepped up defensively with multiple great plays, including Wolf’s heroics at shortstop along with a great run saving backhand play by sophomore second baseman Nolan McCarthy.

The Huskies not only stepped up defensively, but also dominated from the mound. Starters senior Michael Lincoln and junior Cam French dominated, each throwing complete games. “We play loose with a lot of fire and focus one pitch and one game at a time,” said Lincoln, who is also a team capitan. He certainly came out fired up, striking out seven Mattawan hitter in his dominant semifinals start. French was also great from the mound in the championship, working efficiently and throwing 21 first pitch strikes and only allowing one first inning run in route to the district win.

After the district championship, the Huskies are looking forward to regionals. “I think our chances (at regionals) are pretty good,” Wolf said. “I think we have one of the best teams in the state.” This confidence is mirrored by head coach Chris Andrews, who has noticed similarities between this year’s team and his 2015 team that advanced to the state final game. “We just had a sense like we’re not ready to be done. We want to keep going, if for no other reason is to spend another two weeks together.” Andrews said. This is a feeling Andrews recognized from his great 2015 team. The love and connection between the teammates is what has made and will continue to make PN baseball’s great playoff run so special.

The team continued their success over the weekend in Regional tournament play by defeating Brighton in 9 innings with a score of 4-2. Unable to complete the tournament due to rain, the team will take on Grand Ledge today, Monday, June 11, at Battle Creek Lakeview HS at 3:00pm. This game will decide the regional champion.

The Huskies won their first district game on Tuesday against Saint Joe. After a rough start, the Huskies used an hour-long rain delay to help turn the moment of the game, outscoring Saint Joe 7-1 in the final two innings. In the 7th, sophomore Nolan McCarthy stepped into the box down one with two runners on. Down to his final strike, McCarthy was hit by a pitch, keeping the season alive. Then, in dramatic fashion, three more Huskie batters were hit in a row, plating the go ahead and winning runs. In the bottom of the seventh, senior Michael Lincoln sealed the game after a gritty 5.2 inning relief appearance, along with the help of an unbelievable diving double play made by sophomore right fielder Parker Brey. This come back victory put the Huskies two games away from a district title.

On Saturday morning, the Huskies faced a Mattawan team who had previously swept PN in their regular season series. This game, the Huskies wasted no time scoring runs, plating two in the 2nd inning and four in the 3rd. This offensive production was in part thanks to the great performances of senior Noah Hecht, who had 3 hits and 3 RBIs, and sophomore Gannon Andrews, who had two walks and layed down a perfect rally-starting bunt. Also, senior Michael Lincoln again dominated from the mound, throwing 4.2 innings before allowing a baserunner, and ending the day with a complete game victory. This victory put the Huskies in the championship game, facing the winner of the Portage Central, Kalamazoo Central semifinal game.

After PC defeated KC 8-0, the Huskies faced their rival looking for revenge after PC won the second regular season matchup 8-0. After allowing one run in the first inning, junior pitcher Cameron French shut out the Mustangs in the final six innings of the game, in part due to the unbelievable defense of Senior shortstop Jonathan Wolf, who made two diving plays along with a key inning-ending double play. The Huskie offense came alive in the fourth, scoring 5 runs, including the eventual winning run. The balanced attack including hits and RBIs from sophomore Greg Lapetina, junior Cameron French, junior Tyler Helgeson, sophomore Gannon Andrews, among many others. Senior captain Jonathan Wolf was the first player handed the district trophy by coach Chris Andrews.