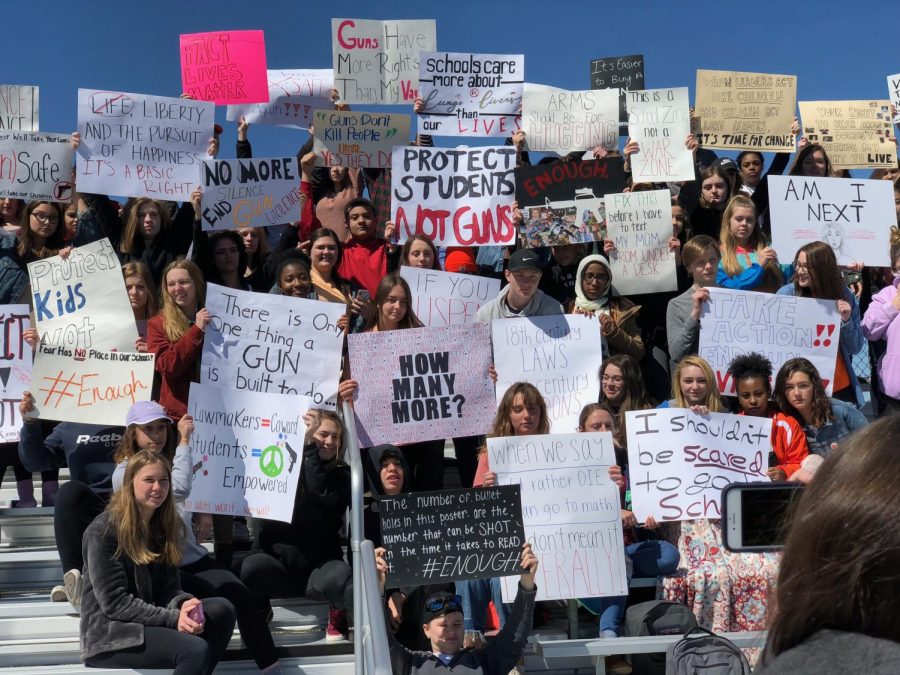 Students made more posters than for the last protest, and their organized events were held in the new bleachers at Huskie Stadium. Photo by Lily Antor.

At 10:00 am today, students participated in the second national school walkout. Held on the anniversary of  the 1999 Columbine High School shooting, students gathered to protest government inaction on policies that might make schools safer.Students organized themselves in the new bleachers of Huskie Field. “My motivation for walking out was to honor everyone who lost their life due to gun violence and to show that I, as a student, can get my voice out there to push for stricter gun laws,” said Andre Walker, a sophomore.

As indicated in an email sent home from administration to parents, the school supported students in their walkout endeavor from 10:00 am to 10:31 am. As the 30 minutes began, senior speakers Jessica Beadle, Lily Antor, sophomore Malia Skinkler and Abbi Kelly, and a poet, senior Jillian Bowe spoke about their support of the walkout.  Senior Ayushi Patel, a sophomore, said, “this has been going on for too long and it’s about time our voices are heard.” Sophomore Olivia Green added, “I walked out today because I don’t want to hear about another school shooting. I believe there needs to be change or else nothing will ever happen, we never know…we could be next. Junior Gabi Ford shared about how she had her parents’ support for her actions today. “When I walked out of my house this morning my mom told me to be the change I want to see in the world and that is exactly what I aim to do,” she said.

After 10:31 am, students were expected to return to class. A group of about 30 students did not, however, choosing to receive the disciplinary consequences for being absent from school in order to express their views.  “I have a couple little sisters and they had to learn how to barricade a classroom, which I think is ridiculous. One of them in nine,” said junior Kalina Dusenbery, who stayed out past the time allotted. Junior Sasha Springman, also among the extended protesters, added, “I shouldn’t have to be scared to drop my little siblings off at school. Sometimes I’ll forget to say goodbye, and that makes me worry.” Some students returned out of respect for the rules, but who also had strong feelings about the issue. Senior Daijana Labon is one of them.  “We need to put an end to this [giving consequences to students who stay out]. They’re actually here, they actually care. I’m leaving, but people should know that even though someone leaves, it doesn’t mean that they don’t care,” she said.

Other teachers supported the idea, but questioned the logistics of the protest. “I’m glad that students are feeling that this is something that they strongly believe in because it greatly does affect their experience. I don’t necessarily know that being out there all day accomplishes more,” said English teacher Mitchell Sytsma. English department colleague Ben Neal said, “I respect the voice and the rights of anybody, including high school students. I appreciate their concern for an issue this country is wrestling with. My only frustration might be for the many who have no interest in the topic but just want to get out of class, but that shouldn’t deter from the ones who really do care.” Social studies teacher Ryan Ledlow said, “I am very much in favor of students expressing their views, I just worry about the redundancy of if we already had one, if the second one is going to be effective. I would like to see if the movement continues and expands to our elective leaders.”

Along with the students who walked out for the national event, other students also walked out to represent the other side of the issue and protest against gun control. Holding signs of their own, these students wanted their voices to be heard as well. “I wanted to show conservatives that they can come out and it will be ok,” said sophomore Grayden Ladik. “I want people to know that guns don’t kill people, people kill people, and that we [conservatives] don’t support school shootings.” Sophomore Andrew Stevens echoed the sentiment, saying, “I wanted to show that conservatives can come out and conservatives can show their views. At the first walk out, the second walk out, and the Black Lives Matter assembly, there was no counter argument.”

Today’s walkout was entirely student organized and led, but supervision was provided by administrative personnel to ensure student safety.

Click here to read WWMT’s coverage of the event.

*Note: For clarification, PNHS does not have a Black Lives Matter assembly. The school has a Black History Month assembly in February.

UPDATE:
At 1:30 pm, students participating in the walkout took their protest to Milham Avenue for the duration of the school day.

The protesters remained silent for the last ten minutes of the walkout in memoriam of the victims of Columbine High School and the school shootings since then.